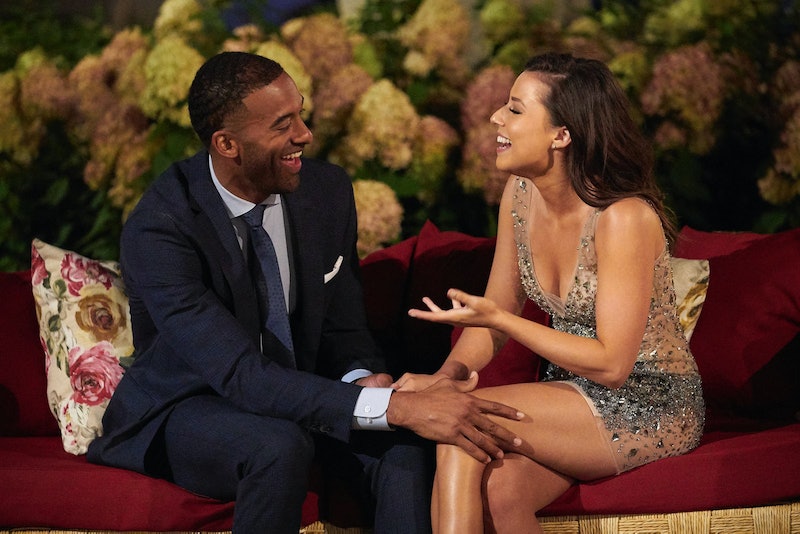 In a move that shocked all of Bachelor Nation — and everyone watching at home — Matt sent fan-favorite Katie Thurston home on the Feb. 8 episode of The Bachelor. Despite a fun-filled one-on-one date where they pranked Matt's best friend, Tyler Cameron, the Bachelor ultimately felt some of his other relationships were further along than his and Katie's.

"You’ve been honest with me, and I owe the same honesty to you," he told her before admitting that he couldn't give her a rose. "The truth is, my relationship with some of the other women in the house has progressed further along than ours has. ... That’s not a slight at who you are and our time together. I just haven’t had those feelings that I need to have to find a wife in this process." Matt reiterated that Katie is "an incredible woman" but couldn't see her as his wife. "My heart isn’t leading me in that direction," he told the cameras.

Matt's decision left Bachelor fans reeling — but not for long, as they soon began begging ABC to make Katie the next Bachelorette since she didn't find love with Matt. And according to a recent Variety report, fans might get their way.

Katie was just as shocked by the outcome as everyone at home. As she left their date, she explained that she had begun picturing what a potential life with Matt could have been like. "I just didn’t see that coming at all," she admitted as she drove away from the resort. "I just felt the blood drain from my face when he started to tell me I wasn’t getting the rose … you start painting your future only for it to be erased."

As upsetting as it may have been for Bachelor fans to see one of their favorites get eliminated, they did get one last great Katie moment, as she admitted that she has no regrets about her time on the show. "I don’t regret being myself. It just sucks that it wasn’t enough," Katie said. "He has relationships forming with other women already. I just thought it was too soon to count me out as one of them.

She concluded her time on the show by declaring she's not done looking for love and that her time with Matt taught her what she wants in a man. "I know what I deserve, and I deserve a man who knows what I have to offer. I am who I am, and there’s someone out there who wants that," Katie said.

The day after the crushing moment aired, two Variety sources who are familiar with the casting decision say Katie is the network's "top pick" to lead the next season of The Bachelorette. ABC has yet to comment on this report or fans' reactions, but hey, Hannah Brown left Colton's season of The Bachelor on a very similar note, so it's not completely unreasonable to think Katie will be the next woman taking over the Bachelor mansion.