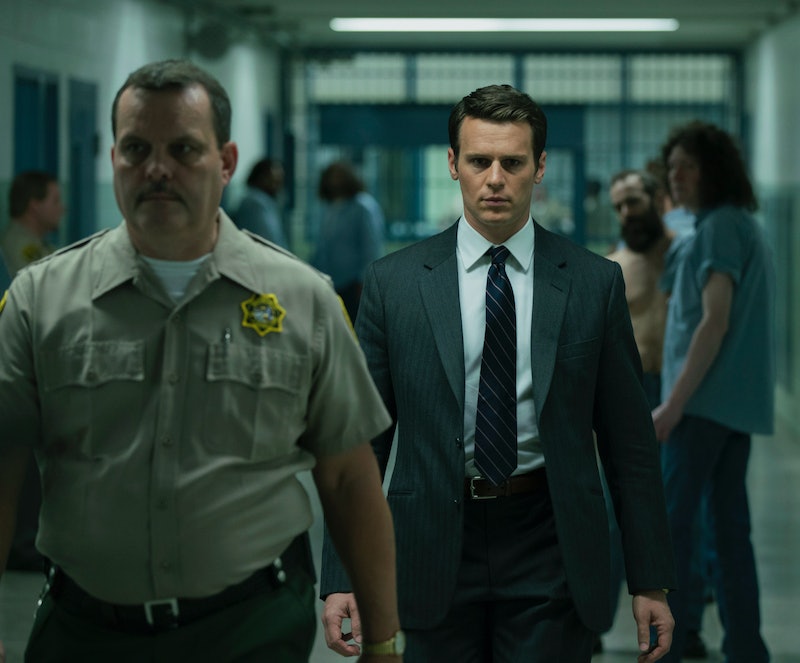 Update: In January 2020, Netflix announced that it was releasing the Mindhunter cast from its contracts and that Season 3 was indefinitely on hold, according to Deadline. In October, executive producer David Fincher seemed to confirm the show won't return for a third season during an interview with Vulture, though a Netflix spokesperson added "maybe in five years."

Earlier: Mindhunter isn't technically a true crime show, but it is based on real people, events, and serial killers, so it's still at least adjacent to the genre. Plus, its slow-burning drama makes it all the more gripping to watch, which is why a Mindhunter Season 3 seems pretty likely. Real life intrigue, juicy crime-solving, and Jonathan Groff? What's not to love?

Though Netflix hasn't yet confirmed a third season, there are more than a few reasons to believe the show will be back. It was a hit when it first came out in 2017, and barring any major reroutes, it should be able to keep that momentum. True crime also continues to be popular, so there's definitely a big audience. And there are plenty of other serial killers and cases Mindhunter can explore as it continues, especially as it moves forward in time.

Season 1 took place in 1977 and Season 2 covers 1979 to 1981. Now that the characters are in the '80s, a Season 3 could actually be Mindhunter's biggest yet. According to BBC News, America hit a serial killer peak in the '80s, with at least 200 operating in the U.S. alone — including notorious figures like like Jeffrey Dahmer and Richard Ramirez (aka the Night Stalker).

Of course, it's not just about the storyline; the cast also has to be available and game for more. Mindhunter's two main players are Jonathan Groff and Holt McCallany, who play FBI agents Holden Ford and Bill Tench, respectively. Looking at the actors' IMDb pages, it does seem like they'd be free to return — and perhaps have even kept their schedules open for that exact reason. Groff has voiced a couple of roles and McCallany has had a couple of bit parts, but they're largely available for a third season.

Last time, Mindhunter was renewed for Season 2 about a month after it was released. If there's a similar timeline this time around, it could be a while before more episodes hit Netflix. Despite its November 2017 renewal, it took the series until December 2018 — over a full year later — to wrap filming. And then it was another seven months before the series actually came back. If Season 3 follows suit, it could take nearly two more years for Season 3 to drop — likely in 2021.

Of course, it's understandable why production is so drawn out. Yes, the show is technically fictional, but it must still take a lot of research in order to ensure its real-life aspects are accurate. And if that's the time it takes to make the series good, then it's worth the wait. It obviously worked for Season 1, which with an audience score of 95% and critics score of 97% on Rotten Tomatoes, was clearly a hit among viewers and critics alike. That's no easy feat, so if Season 2 can deliver similar results, it probably won't be long before Ford and Tench are once again back on the case.

More like this
Here’s Why Danny Masterson’s Hyde Isn’t In 'That '90s Show'
By Brad Witter
Netflix Shut Down 'Bridgerton' S3 Rumours About A “Very Dark” Storyline
By Bustle
Everything To Know About 'Cobra Kai' Season 6
By Brad Witter
'The Crown' Season 6 Has Suspended Filming "Out Of Respect" For The Queen's Death
By Bustle Staff
Get Even More From Bustle — Sign Up For The Newsletter
From hair trends to relationship advice, our daily newsletter has everything you need to sound like a person who’s on TikTok, even if you aren’t.