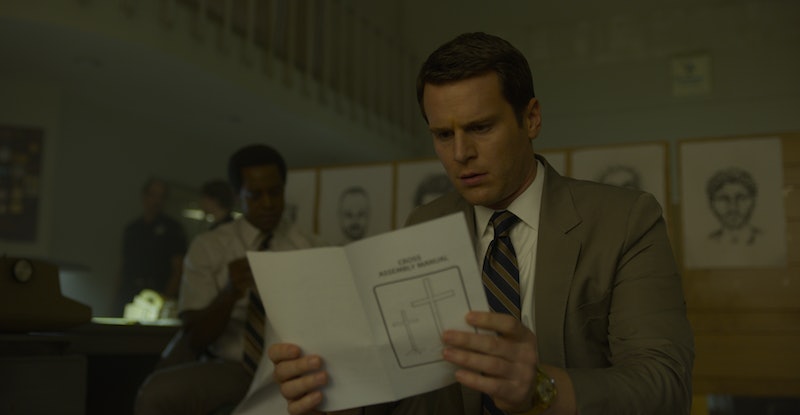 The new season of Mindhunter is a puzzle and it's one in which fans aren't being given all the pieces just yet. Instead, the first photos of Mindhunter Season 2 are being doled out by journalists who were given a chance to peruse over 200 images from the new season, but only allowed to share eight of them with their readers. That also likely means that no one website will have the same set of photos, so Mindhunter Reddit is gonna be crazy.

What is clear from these initial images of the new season, set to premiere Aug. 16, is that Mindhunter Season 2 is about the Atlanta Child Murders, but there are many familiar faces from last season that play key roles this time around. That includes Season 1's serial killer Ed Kemper.

"Have you got somebody, Holden? Somebody you can't catch?" Kemper (Cameron Britton) asks FBI agent Holden Ford (Jonathan Groff) in the trailer Netflix shared with the press. (The official Mindhunter trailer is set to premiere soon.) "This person you are after, he has an overwhelming fantasy life," he continues. "Fantasies of what he's done. What he wants to do. His dreams will consume him. Soon, the real world too much to bear."

Who Kemper's referring to here is unclear, likely, because this could be true of any serial killer. Last season, Mindhunter followed Dennis, the ADT Security employee, who is believed to be the infamous BTK Killer. Dennis pops up again in the Season 2 photos. The trailer also seems to feature one of his crimes — "BTK" stands for bind, torture, kill — which ends with a frightened woman screaming at what she's found tied up in her bathroom.

But, this time around, Mindhunter is also delving into other notorious serial killers, including Charles Manson, Son of Sam, and the Atlanta Child Murderer.

Between July 1979 and May 1981, at least 29 African American children, teens, and adults in Atlanta, Georgia, were murdered. In 1982, Wayne Williams was convicted of two of the murders. Following his trial, Williams was linked to 20 more of the murders, according to the New York Times, but was never tried or convicted for the murders of the children.

In the years since, many have questioned if Williams, who is in jail serving a life sentence, was wrongly convicted. This was the question of the 2018 podcast Atlanta Monster and Investigation Discovery special The Atlanta Child Murders. According to IndieWire, Williams will play significant role in this season, which will pick up "in the back half of the investigation as the FBI is called in to Georgia."

Photos from Season 2 show new characters connected to the Atlanta child murders, which will be the main story of the season. Most of the images feature the women who played a large role in keeping the case in the news, but maybe haven't gotten the attention from the press that they deserve.

Knowing what we now know about the Atlanta Child Murders case, it's clear that this isn't an easy one to solve. It's something, the Mindhunter teaser alludes to. "How do we catch a fantasy?" Tench asks, to which Kemper answers, "If he's any good, you cant."

Either way, though, these agents are going to try and let's assume fans of the show will be working right along with them.