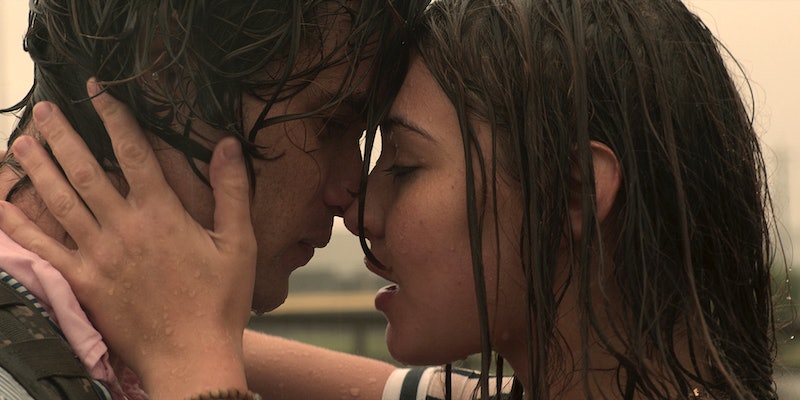 Attention, John B. fans: Netflix has confirmed Outer Banks will return for Season 2, and it has a massive cliffhanger to resolve when it does. The last we saw of the show's ragtag group of friends, John B. and Sarah had escaped on a boat and charged into a storm. Ward Cameron tried to convince them to turn around via walkie-talkie, but it ended up backfiring: John B. revealed to the cops that it was Ward who killed his dad and framed him. "I will come back one day and take what's mine," he promised Ward before the transmission cut out.

It was implied that Ward would be taken into custody after John B.'s admission, but we never actually saw that happen. Meanwhile, the cops told J.J., Pope, and Kiara that they lost track of John. B and Sarah in the storm, and that the two may not be alive anymore. The final moments of Season 1 revealed that John B. and Sarah had in fact survived. They were rescued by a cargo ship sailing all the way to the Bahamas, where the gold supposedly is.

Such a big cliffhanger suggests that Outer Banks was always meant to have at least one more season. A premiere date for Season 2 has not yet been announced, but it will likely be quite a while before we see John B. and co. back in action: Netflix shows typically take at least a year to produce, and the coronavirus pandemic will inevitably complicate production. At earliest, Outer Banks will likely return in summer 2021.

In the meantime, the similarly-set North Carolina teen show One Tree Hill feels like the natural predecessor to Outer Banks, and is available on Hulu if you want some more teen angst and drama. Or if you liked the criminal aspects of Outer Banks, Ozark delivers on the "small town gets embroiled in big crime" angle, while Bloodline offers family crime in the Florida Keys. Outer Banks also feels a lot like The O.C., but sadly the only way to watch that is by purchasing it on Amazon. Regardless, there are a wealth of other shows to tide you over.

More like this
TikTok Pointed Out A Major 'Emily In Paris' Continuity Error
By Sophie McEvoy
Everything To Know About 'Cobra Kai' Season 6
By Brad Witter
'The Crown' Season 6 Has Suspended Filming "Out Of Respect" For The Queen's Death
By Bustle Staff
All The ’70s Easter Eggs You Missed In 'That ’90s Show'
By Grace Wehniainen
Get Even More From Bustle — Sign Up For The Newsletter
From hair trends to relationship advice, our daily newsletter has everything you need to sound like a person who’s on TikTok, even if you aren’t.