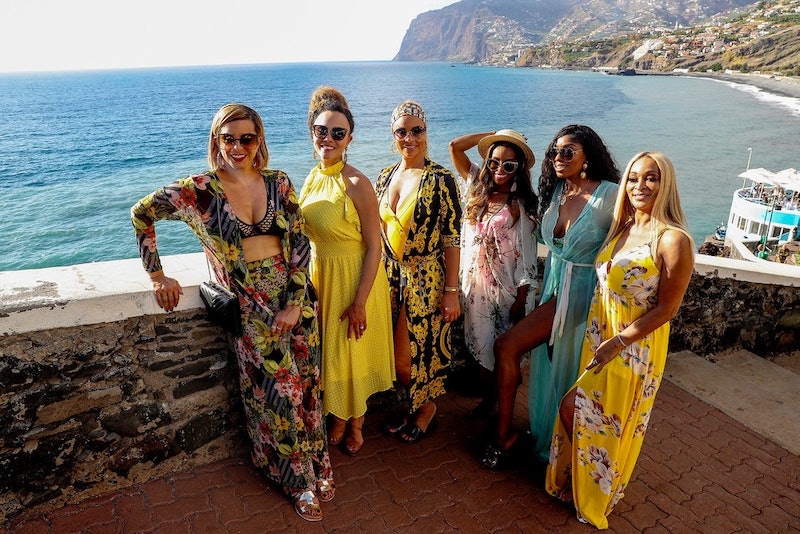 Following an explosive fifth season and three-part reunion, the women of Potomac will have plenty more champagne (and tea) to sip in a potential Real Housewives of Potomac Season 6. The question is less if the Bravo franchise will return next year but when. And although executive producer Andy Cohen previously told the Everything Iconic podcast that he was pleased with "what's happening in Potomac," it's already clear that Monique Samuels will not return.

In Season 5, the housewives included Karen Huger, Gizelle Bryant, Ashley Darby, Robyn Dixon, Monique, Candiace Dillard, and newcomer Dr. Wendy Osefo. Following an on-camera physical altercation between Monique and Candiace, however, the odds of both women coming back for another season were already slim. As viewers know, Monique did not attend the group trip to Portugal and didn't film with Candiace again following the incident, though both women were at the reunion. Gizelle also sided with Candiace, putting a halt on her scenes with Monique as well.

"I don't see a world where the two of us can exist," Candiace told E! News in late October, hinting she would not return for Season 6 if Monique did. Some have suggested that Candiace might not have a choice, however, given some "messy" social media activity. She recently apologized for resurfaced homophobic tweets, and she also reportedly wished death upon a blogger who later passed away.

Gizelle also weighed in on Monique's future on RHOP during a recent Stylecaster interview. "I tell everyone, 'I don't hire, and I don't fire,'" she said, following her costar's "binder of receipts" moment during the reunion. The EveryHue Beauty founder added, "She obviously she had this big issue with Candiace, and that never really got resolved. So, I don't know what's going to happen. We'll see."

But as the Season 5 reunion wrapped up on Dec. 27, Monique announced her intent to quit. Speaking to her followers during an Instagram Live, she expressed that "enough is enough" and felt a line was crossed when her children were discussed. She said:

"It was a crazy ride. It’s not easy doing reality TV, and to be quite honest, I’m over it. I appreciate everything that people have done for me, everybody that's been Team Monique — I love y'all, I thank y'all — but when you cross certain lines there's no going back. And for me, my family is that line. The opinion of my family and my kids and what they think about anything that I do is more valuable than anybody’s opinion, so I’m over it."

Monique finished, "I'm always going to be a great example of a role model for my kids, and you have to know when enough is enough."

Although the women may reveal their casting statuses or future plans on their own in the meantime — as Monique just did — Bravo likely won't officially announce the Season 6 RHOP cast or expected premiere date well into 2021.