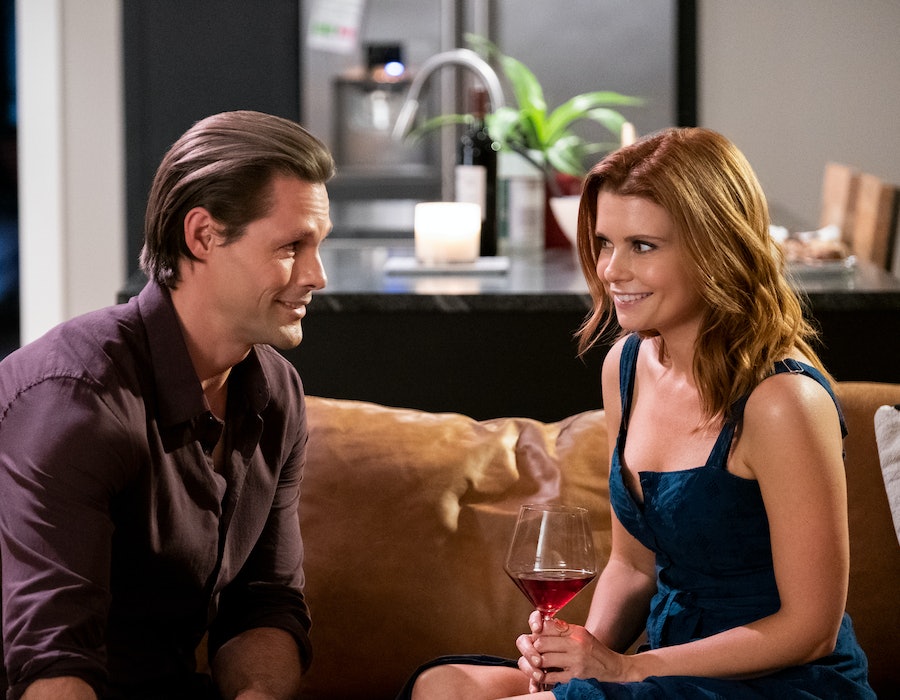 Netflix's new romance drama Sweet Magnolias is based on Sherryl Woods' book series of the same, which is great news for fans. If Sweet Magnolias returns for Season 2, there's already a ton of source material for the writers to pull from. Whether or not Netflix renews the show will ultimately depend on its reception, but having a built-in audience of people who loved the books can't hurt.

New Netflix seasons usually drop every six months to a year, which means a potential second season could hit the streaming site as early as this fall. That depends on if it's able go back into production soon, but it may help that Sweet Magnolias films in Covington, Georgia — a state that has already opened back up for many businesses.

The series itself is set in the fictional town of Serenity, South Carolina and follows friends Maddie, Heather, and Dana Sue as they deal with love, family, and life together. The full Sweet Magnolias book series has 11 novels in it, with the most recent released in 2014. That gives the show plenty of material to dive into for a second season and beyond. Woods, who also executive produced the series, revealed on Twitter that the first season covers material from books one through three. By that estimate, it would take at least four seasons to cover her full novel series.

Woods' other book series, Chesapeake Shores, has 14 novels and has already been turned into four seasons on the Hallmark Channel. If Netflix follows suit, there should be a lot more Sweet Magnolias to come, allowing Woods and Sweet Magnolias showrunner Sheryl Anderson to adapt the story faithfully.

"We really made a concerted effort in the writers room to honor the core events and characters and certainly the core themes and emotions that [Woods] had created," Anderson told AfterBuzz TV, adding that any new characters or storylines went through a test of sorts. "Could we see [Woods] having created this character and added him or her to Serenity?" Anderson said. If the answer was yes, they moved ahead.

Another thing working in Sweet Magnolias' favor? It will likely bring in viewers just by virtue of its cast. The core three actors have starred on shows like Once Upon a Time and Gossip Girl (JoAnna Garcia Swisher who plays Maddie Townsend), Drop Dead Diva (Brooke Elliott as Dana Sue Sullivan), and Chicago Med (Heather Headley as Helen Decatur).

But one of the biggest draws comes from secondary character Noreen Fitzgibbons, who is being played by Jamie Lynn Spears in her first TV role since Zoey 101 ended in 2008. Between the book fans and the Spears fans, it seems likely that will translate into enough viewers to nab a Season 2.

More like this
'Bridgerton’s Jonathan Bailey & Simone Ashley Just Teased A First Look Of “Kanthony” In Season 3
By Grace Wehniainen, Alyssa Lapid and Sam Ramsden
'The Sandman’s Ending Is A Departure From Neil Gaiman’s Comic Book Series
By Kadin Burnett
'Bridgerton' Newbie Hannah Dodd Has Thoughts On Colin and Penelope’s Love Story
By Bustle UK
Netflix Just Revealed When 'Never Have I Ever' Seasons 3 Will Premiere
By Gretchen Smail and Alyssa Lapid
Get Even More From Bustle — Sign Up For The Newsletter