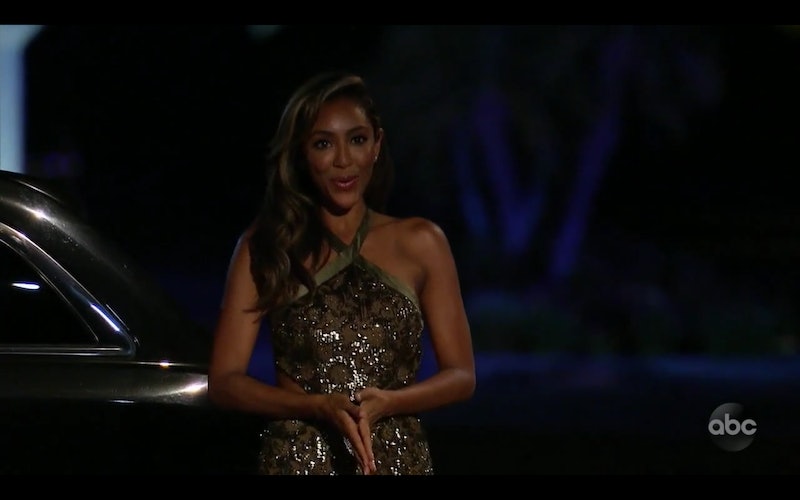 The Bachelorette officially has a new lead — and that may mean new contestants, too. In the final moments of the Nov. 5 episode, Tayshia Adams arrived to meet the 16 guys Clare broke up with in order to be with Dale Moss. But there may be some new men heading to La Quinta Resort as well: in August, Us Weekly reported that producers had reached out to "backup" contestants two weeks into filming, right around the time Clare quit the show.

Because of the unusual circumstances in which this season of The Bachelorette was filmed, producers invited 42 men to quarantine at the Palm Springs resort where they were filming, just in case one of them tested positive for coronavirus. Clare ultimately met 31 men on her first night, but the roster of additional, already vetted cast members came in handy when Clare left the show early and Tayshia took over as the Bachelorette.

"Last weekend, producers reached out to backup Bachelorette contestants who had been vetted for Clare’s season but were ultimately not cast to film at La Quinta [Resort]," an insider told Us Weekly at the time. "When producers reached back out, out of the blue, it was very apparent that something had happened with production."

This gives Tayshia a better shot at finding love, especially since some of the remaining men (namely Blake Moynes and Jason) struggled with the decision to stay on the show after Clare left because they'd developed genuine feelings for her. "I can only imagine how [Tayshia] feels like, 'I have 16 guys here, but they weren't originally here for me,'" Riley told the group as they waited for Tayshia's arrival.

She acknowledged that the men may have some residual feelings for Clare during a conversation with host Chris Harrison before she made her grand entrance, but explained that she wouldn't hold that against them. "I just know that this process moves very quickly and you start to invest a lot of feeling really early on," Tayshia said. "I don't know if that's the case for some of them, and if so, I'm more than happy to have that conversation with them, if they feel like this isn't the right time for them or I'm not right for them."

Still, Tayshia seemed optimistic that she would find love with one of the men waiting for her inside the resort. "I feel like this is the right moment in time. I wouldn't be standing here if it wasn't meant to be," she said. "I'm ready."