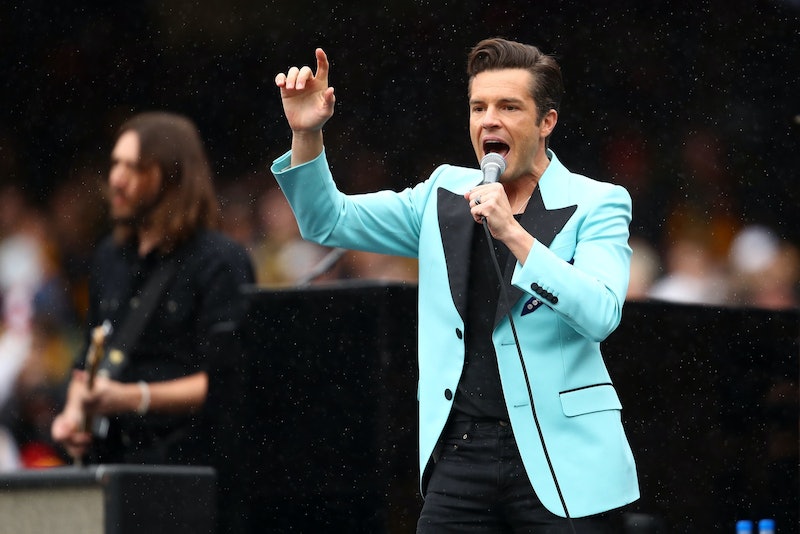 Following last year's show-stopping Glastonbury set and a chart-topping sixth studio album, appetite for U.S. rockers The Killers appears to be at an all time high. Unfortunately, plans for a UK tour were postponed earlier this year in light of the coronavirus pandemic, leaving many fans wondering when they'll next get a chance to see the "Mr. Brightside" hitmakers live. But will The Killers tour the UK in 2021?

Thankfully, The Killers are indeed scheduled to embark on a UK tour in support of their latest album next year. As stated on the band's official website, the UK leg will get underway at the Keepmoat Stadium in Doncaster on Tuesday, May 25, before moving onto the Ashton Gate Stadium in Bristol on May 27. Two days later, the "Human" singers will perform live at Coventry's Ricoh Stadium, and on Monday, May 31, will hit the stage at the St. Mary's Stadium in Southampton. Throughout the month of June 2021, The Killers also plan to make stops at the Carrow Road Stadium in Norwich, London's Emirates Stadium, the Falkirk Stadium, Middlesbrough's Riverside Stadium, and Old Trafford in Greater Manchester. Tickets for all upcoming UK tour dates are now available to purchase online.

As iNews reports, the band were originally scheduled to tour the UK in the summer of 2020, and were later forced to postpone due to the COVID-19 outbreak. "The news is changing every hour around coronavirus,” the band said in a joint social media statement at the time, adding that they wanted fans “to stay focused on prevention and remaining safe and cautious."

In addition to a string of updated tour dates, The Killers also recently dropped their sixth studio album Imploding the Mirage, which debuted at number one on the Official UK Album Chart back in August. The release, which follows 2017's Wonderful Wonderful and the one-off 2019 single "Land of the Free," further cemented the group's record of being the only international band in history to have six consecutive chart-topping albums in the UK since their 2004 debut.

Although the foursome only recently unveiled their latest body of work, frontman Brandon Flowers has already teased the band's next project. During an interview with the Independent, he revealed the pandemic had upended The Killers' usual album cycle plans, which prompted the singer to turn "right back to the piano and the studio." Speaking to the publication, he revealed: "a lot of songs have been coming. I predict a really quick turnaround for another record.”

Tickets for The Killers 2021 UK tour are available to purchase now.