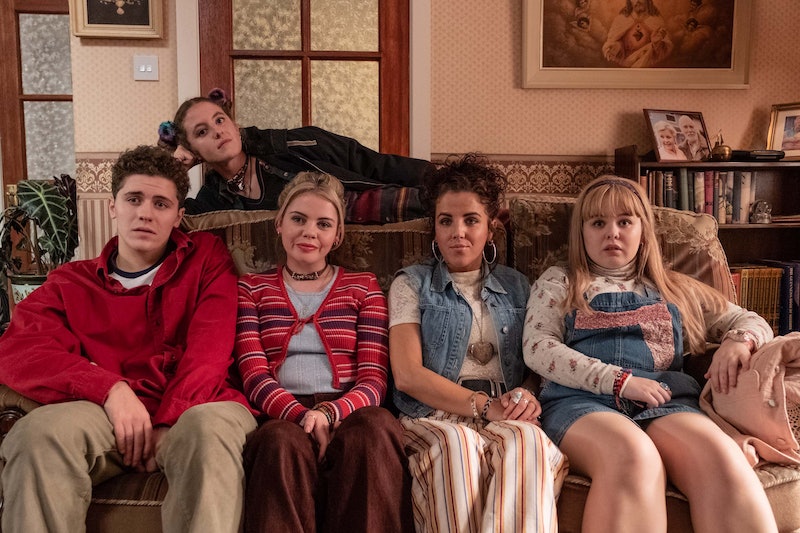 Loving a TV show, its universe, and the characters who live within it means living in fear of losing it. Hit Channel 4 sitcom Derry Girls is so beloved by fans that many were crushed after star of the show Tommy Tiernan said its third season would be its last. Luckily, however, the show's creator and writer Lisa McGee has assuaged fans' concerns by revealing that she's not done with the gals yet. When asked recently whether there will be a Derry Girls movie, McGee admitted she's been forming ideas for a feature-length script.

Earlier this year, in March 2020, McGee tweeted "Hi everyone. I’m currently in the thick of writing series 3. Who knows what the future holds for The Derry Girls but please don’t worry...we are plotting!!" And an appearance on the Ray D'Arcy Show on Ireland's RTÉ Radio 1 on July 20 seemed to confirm what that plotting entails.

Responding to queries about a potential movie, McGee told D'Arcy: "For a while I didn't know if it would work but now an idea is starting to vaguely form in my head."

Filming for the show's third season was suspended owing to the coronavirus crisis and McGee said she needs to complete that before moving onto a possible film. "I'd like to do it," she said, "and I think the cast would too so that would be the long-term plan."

As no official shooting date for the third season has been announced, it might be quite a while until we hear more about a potential film. “The show is quite complicated to film in these circumstances and we want to do it as well as we possibly can,” she said. “We want it to be brilliant so we’re trying to figure a lot of stuff out at the minute but I think we’ll get there.”

So what's in the works for everyone's favourite eejits in the upcoming season? Nothing has been revealed as of yet and it looks like the show's cast know as little as we do. Nicola Coughlan, who plays Clare spoke recently on Angela Scanlon's Thanks A Million podcast about the show's next instalment. "We’re all really excited to go back and start again and see the scripts because we actually haven’t," she said.

In the interest of satiating us thirsty lot (oh and charity of course) the cast appeared alongside fellow Irish actor Saoirse Ronan on a Zoom sketch in aid of RTE does Comic Relief on June 26.

The spoof showed the actors playing themselves being just as awkward as ever when meeting Ronan, not straying too far from the characters they play on Derry Girls.

While you're waiting on more from the gang, seasons one and two are available to stream on All4 right now.

This article was originally published on May 14, 2019