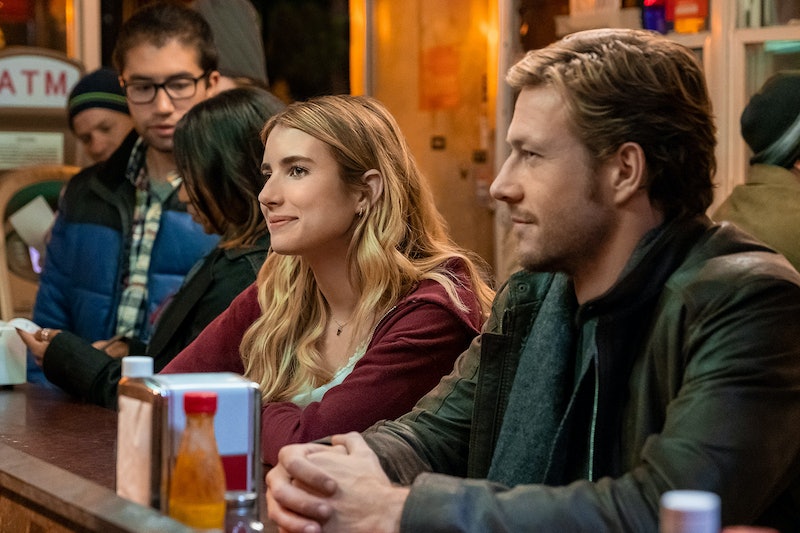 Netflix's latest romantic comedy Holidate has been hanging out in the streaming giant's "Top 10" ever since it hit the platform on Oct 30. Which can really only mean one thing: a potential sequel. Holidate stars Emma Roberts as Sloane, a single woman who's sick of her family nagging her about her love life during holiday gatherings. After meeting Jackson (Luke Bracey), the two decide to be each other's "holidates," a kind of wing-person date for every holiday bash. Together, the two hit up various holiday parties throughout the following year, from New Year's Eve to Valentine's Day and through the summer. Naturally, sparks fly.

Like most Netflix rom-coms, these characters could easily pick up their shenanigans where the movie left off and bring in even more dramas, misunderstandings, and wacky buffoonery from national treasure Kristen Chenoweth (who plays Sloane's Aunt Susan who, inspired the whole holidate situation, to begin with). So while we await an official announcement on Holidate part 2, here's everything we know about a potential sequel so far.

Holidate's Writer Already Has The Idea

In an interview with Vanity Fair, Holidate screenwriter Tiffany Paulsen said she knows "exactly what that story will be and how we would explore it." As we previously mentioned, no sequel has been greenlit just yet, but Paulsen is "certainly hopeful." "We hope that people love it and want to see more of this relationship. I think there’s so much more to explore with Sloane and Jackson, because they’ve barely dated. They go on 11 dates in a year, and there’s a lot to see where this goes. So we’ll cross our fingers," she told the outlet.

The Sequel Would Head To Australia

At the end of Holidate, Sloane and Jackson end up together (of course) and head to his (and Luke Bracey's) native Australia. The story would revolve around Sloane being in a kind fish-out-of-water scenario with Jackson's extended family members. Paulsen even has a cute title ready: "Don't you think Holimates is just a cute title? Holimates: Holidate Down Under," she told Vanity Fair.

In addition to the current COVID restrictions affecting the filmmaking industry in Hollywood and all over the world, there's something else going on that would prevent a Holidate sequel from hitting Netflix any time soon. For one thing, as ELLE points out, Roberts is expecting her first child. So clearly she has some other business to attend to before even considering Holidate 2.

More like this
Here’s Everything Coming To & Leaving Netflix In February
By Jake Viswanath
11 Movies To Watch At The 2023 Sundance Film Festival
By Chloe Foussianes
Yes, You Can Stream ‘To Leslie’ In The UK Now
By Sam Ramsden
Twitter Is Mad At The Razzie Awards For Nominating A Child For Worst Actress
By Radhika Menon
Get Even More From Bustle — Sign Up For The Newsletter
From hair trends to relationship advice, our daily newsletter has everything you need to sound like a person who’s on TikTok, even if you aren’t.