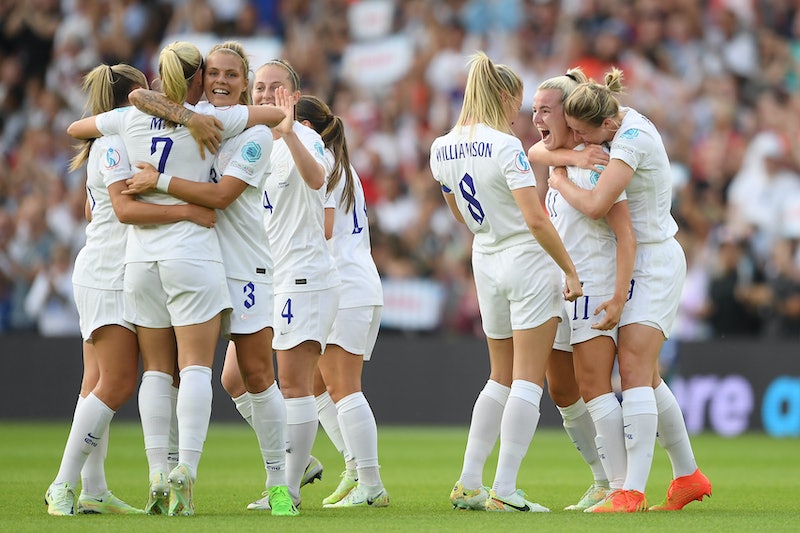 There were defiant chants of “it’s coming home” far and wide after the UEFA Women’s Euro 2022 England match on July 11. Our Lionesses thrashed Norway with an 8-0 defeat at Brighton’s Amex Stadium. Described by ex-goalkeeper Rachel Brown-Finnis as a “spectacular performance in every department,” the Lionesses’ score broke the record for the biggest win in Women’s Euro history. Georgia Stanway netted the first goal following a penalty, and by half-time, forwards Lauren Hemp, Ellen White, and Beth Mead had rattled the score up to 6-0. And that was only the beginning of the excitement.

When the team came back on the pitch, forward Alessio Russo broke England’s record with a header, before Mead wowed the crowd with a hat-trick to solidify the Lionesses’ win against Norway’s Grasshoppers. Overjoyed striker Ellen White told the BBC: “It’s amazing to score for England. I don’t even know how to describe it. You could probably see it in our faces in that first half, it was just unreal.”

As for forward Beth Mead, who’s been dubbed “Teeside’s hat-trick hero,” she’s just as astounded with the results of the match. “I don’t think I even dreamed of this,” she said. “I’m just so happy I got the goals to help the team. I’m just loving being here, loving being part of this team and loving every minute.” While the excitement is electric, Alessia Russo reminded the team that they were still in the group stage. “There are lots more big games to come but we’re thriving in it and looking forward to what comes next,” she told the BBC.

Last night’s big win resulted in celebration from fans across the country, signalling a new era in women’s football. As the crowds cheered and Ian Wright couldn’t contain his excitement, below are just some of the memes and reactions Twitter had to England’s record-breaking score against Norway.

More like this
Twitter Is Burning As Phoebe Dynevor Reveals Daphne’s 'Bridgerton' Exit
By Sophie McEvoy
Twitter Has No Chill As The 'Love Island' Villa Descends Into Chaos
By Darshita Goyal
Twitter Has Renamed Ekin-Su After *That* 'Dancing On Ice' Performance
By Sophie McEvoy
Twitter Is Having A Field Day Over Mr Blobby’s Costume Selling For £62k
By Catharina Cheung
Get The Very Best Of Bustle/UK
Sign up for Bustle UK's twice-weekly newsletter, featuring the latest must-watch TV, moving personal stories, and expert advice on the hottest viral buys.