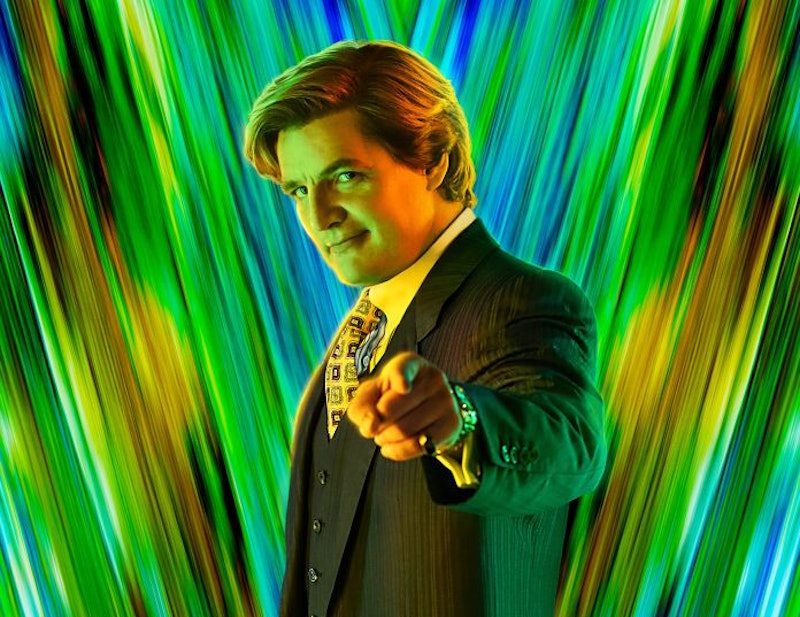 While most would agree that 2020 has been all kinds of awful, it's been a breakout year for actor Pedro Pascal. The Mandalorian star got to show his face a couple of times in the blockbuster second season of the Disney+ series, he appeared in a pair of fun quarantine productions in Home Movie: The Princess Bride and a Community table read, and now he's portraying the villain Maxwell Lord in Wonder Woman 1984. Like most superhero movie villains, the character has quite the history in comic books, so let's take a closer look at Maxwell Lord.

Unlike many other DC comic book characters, like the 79-year-old Wonder Woman, Maxwell Lord hasn't been around all that long. The character first appeared in 1987, debuting in Justice League #1. In the issue, Lord was introduced as an ambitious and conniving businessman whose machinations led to the founding of the superhero team Justice League International by staging terrorist attacks. Lord helped run the team, taking them in a corrupt direction until it was revealed that his evildoings were actually the work of an alien supercomputer that had possessed him. After breaking free from the computer's influence and helping to defeat it, Lord began the next chapter of his comic book life.

For some time, Lord was presented as more of a hero than a villain, as he continued in his role as a benefactor of — and friend to — various superhero teams. He had various ups and downs as most comic book characters do, including times where he was possessed by more evil entities, had his consciousness placed in a robot clone, and gained powerful psychic abilities. Perhaps the most notable storyline involving Lord took place in the comic event Infinite Crisis, where he was retconned as an evil businessman who had been secretly scheming against superheroes for years while earning their trust. During this event, Lord murders the superhero Blue Beetle and uses his mental powers to force Superman into attacking his fellow heroes. This leads Wonder Woman to snap his neck and kill him in what remains one of the most notorious and controversial Wonder Woman storylines ever. Lord would later be resurrected and get into more shenanigans, but his death at the hands of Wonder Woman is arguably what he is best known for.

In Wonder Woman 1984, Pedro Pascal's portrayal of Maxwell Lord was influenced by '80s pop culture to create a slightly different iteration of the villain. "We look back on the ’80s and see all that excess as so fun and expressive, but the other side to it is pretty obvious," Pascal told the New York Daily News. "He’s the full personification of that, of greed and it never being enough. Going after what you want — you’re entitled to it — and when you get it, you want more and you want more and you want more. It’s an insatiable need to succeed and to continue defining what success is in a completely unilateral way."

With this new chapter of Lord's story being written in Wonder Woman 1984, the character is sure to give Lex Luthor a run for his money as the most dastardly and conniving businessman in the DCEU.