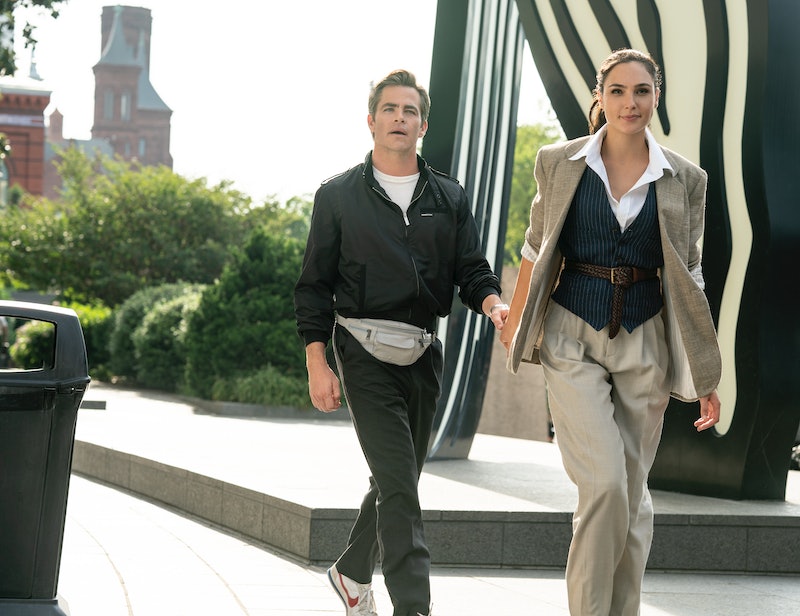 The Queen of the Amazons is getting ready to meet an apex predator. As part of the DC Fandome global event on Saturday, August 20, DC released the second trailer for Wonder Woman: 1984, which features the best look fans have gotten thus far at Kristen Wiig's transformation into the villainous Cheetah. "I don't want to be like anyone. I want to be an apex predator," she says in voiceover, before facing off against Wonder Woman in what appears to be a hallway of the White House.

It looks like she got her wish, as the clip showcases Wiig's character undergoing two major transformations on her way to becoming Wonder Woman's most famous nemesis. First, she's the the nerdy archaeologist Barbara Minerva, with her oversized glasses and red sweater; then, she transforms into a totally '80s bad girl — complete with leather jacket and smudged liner. Finally, at the end of the trailer, fans see Cheetah herself, as Barbara has taken on not just the literal strength and speed of a jungle cat, but the appearance as well.

The trailer also touches on the story arc that inspires Barbara to undergo her transformation from meek archaeologist into her villainous alter ego. "You've always had everything, while people like me have had nothing," she tells Diana. "Well, now it's my turn. Get used to it." In an August 2018 interview with IGN, Gal Gadot noted that Barbara and Diana have the potential to be "amazing best friends" despite their differences. “I think they're both lonely, and Diana sees Barbara's insecurity and it touches her. ... Barbara sees other things in Diana that she doesn't have, necessarily, and they kind of really attract together." Unfortunately, it looks like their potential friendship will turn into a rivalry.

Of course, Cheetah isn't the only villain that Wonder Woman will have to fight in Wonder Woman 1984; there's also the corrupt businessman Max Lord, played by Pedro Pascal, who will be causing some trouble for the Queen of the Amazons. Very little is known thus far about the Narcos star's take on the iconic bad guy — who famously caused trouble for the Justice League during his run in the comics — but based on the new trailer, it seems like he and his power suits are heading all the way to the White House in order to try and take over.

Though it was originally slated for a June 2020 release, Wonder Woman 1984 won't hit theaters until October 2, due to the ongoing coronavirus pandemic. While chatting about the movie during the DC Fandome event, director Patty Jenkins stated that she feels that the movie will be best experienced in theaters, due to its epic scope. Still, star Gadot has assured fans that it will be more than worth the long wait, telling Brazil's Comic Con in December 2019 that she cried after watching WW84 for the first time.

"It was the very first cut, the very first director’s cut," Gadot said. "I forgot it was me… even though I shot the whole movie and I read the script a million times and we did it and filmed it for eight whole months. And all of a sudden, seeing all the puzzle pieces coming together and seeing this huge, grand… I called Patty crying. I had an even bigger reaction than I did for the first one."