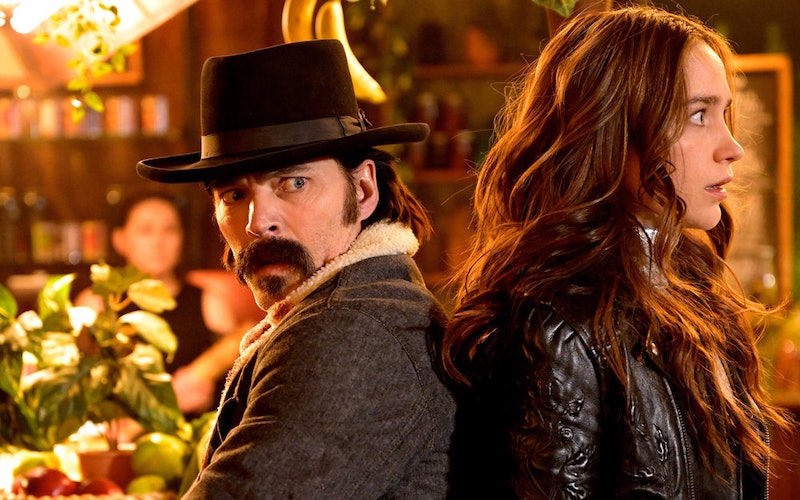 Spoilers ahead for Episode 2 of Wynonna Earp Season 4. Though we're already three episodes into the season, Aug. 9's "Look at Them Beans" felt like the true premiere of Wynonna Earp Season 4. New characters were introduced, Sheriff Nedley returned from the woods (sans clothing), and we finally received some semblance of closure from the Garden of Eden storyline that occupied the first two episodes.

In the 18 months that Wynonna, Doc, and Waverly were stuck in the Garden of Eden, Purgatory changed for the worse. Not only did Nicole lose her sheriff's badge, but after the town was evacuated due to forest fires, a group of demons decided to make themselves at home in the woods outside of town, making it a hellmouth. On top of that, the new magistrate and sheriff have created a chaotic atmosphere that allows citizens to arrest each other and hang them in the town square. Sheriff Nedley has gone missing, and Nicole has taken to patrolling the Earp homestead with a rifle and homemade traps, hoping to catch any demons that might try to venture too close to her and Rachel Valdez, who she's taken under her wing.

Making matters worse, four new characters are introduced in Episode 3 — many of whom seem to spell trouble for our plucky, cooking-inept protagonist.

Cleo (Savannah Basley) seems like she's going to be a real pain in the ass. We still don't know where she came from, but Nicole explains that she waltzed into Purgatory while everyone was MIA, named herself the town magistrate, and elected her own sheriff. She's funny, a bit off her rocker, and has it out for Wynonna's family for some yet-unknown reason. "What does an Earp know about keeping their word, huh?" she asks the gunslinger as she ties her up for monster chow. "This is hereditary, daughter of Earps," she later comments. It seems like Cleo might be this season's Big Bad, rather than Valdez or Eve, but it's still too early to tell.

Audiences don't learn much about the new sheriff (played by Ty Olsson) in Episode 3, but that Cleo recruited him is a red flag. Plus, he just seems like a jerk.

Wynonna meets this good-natured half-demon when she's arrested by the sheriff. She and Cory (Andrew Phung) bond while they sit in a creepy, Joe-from-You-esque glass cage, where he fills Wynonna in on everything that's happened in the past 18 months. Something tells me this isn't the last we've seen of him.

Noam Jenkins plays this sensual vampire who owns a demon bar aptly named The Glory Hole. He also has some serious chemistry with Doc. And since it's been implied that Doc is bisexual, this new character might throw a wrench in his relationship with Wynonna.