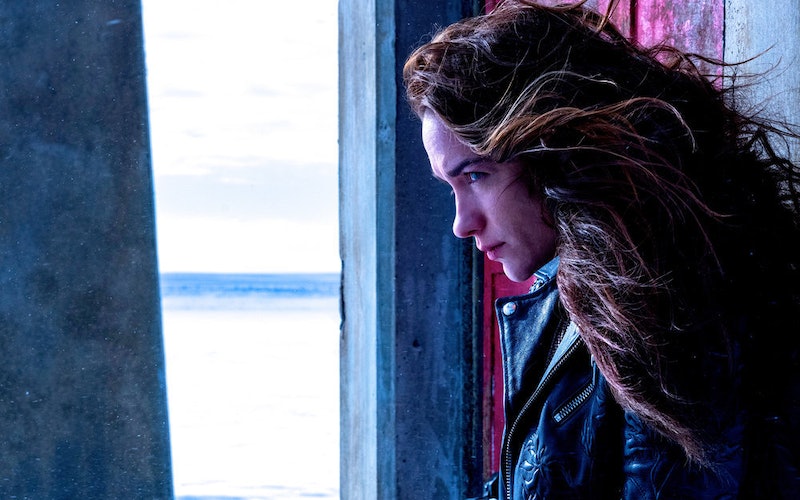 Spoilers ahead for Episode 2 of Wynonna Earp Season 4. In Season 1 of Wynonna Earp, the Revenants terrorized Purgatory; in Season 2, it was Bulshar's widows; and in Season 3, it was Sheriff Clootie himself. Now, it seems to be Eve who's set up to be the new Big Bad, which, for the sake of Purgatory, makes it imperative that Wynonna and crew figure out where Eve went.

As we learn in Season 4, Episode 2, Eve has been locked in the Garden of Eden — presumably since the beginning of time. She's introduced standing stark naked in the cement bunker when a blossoming cherry tree appears and she walks angelically under it, fashioning a tasteful covering for herself out of flowers. Waverly believes Eve is Nicole, since she's taken on the appearance of her fiancée. However, the Biblical figure is also trapped in a small circle that's held in place by a force field; and as she becomes less and less patient, it's clear that this is not Sheriff Haught. But Waverly is too excited to notice, so she disables the force field, frees the Nicole imposter, and begins making her way to the portal which will take them back to Earth.

Meanwhile, Doc sees a weird crystal in the bunker that shows Eve's different faces (one of which is super demonic). He confronts the two women, and Eve proceeds to take the form of Jeremy and Wynonna in order to play to Doc's emotional side. Fortunately, the gunslinger is able to kick her through one of the red doors, and she flies off into some unknown locale through the portal.

Waverly, Wynonna, and Doc are able to return to Earth, where they learn 18 months, three weeks, and four days have passed — not that Nicole has been counting or anything! In the interim, The sheriff has been forced to take refuge at the Earp homestead, because things aren't going great in town. We don't know what happened or who is responsible, but we see dead bodies hanging from nooses, which can't mean anything good. Perhaps Eve made it to Purgatory and has been on a murderous rampage?

There are also lots of lingering questions about Eve: how did she become a shapeshifter? Where is Adam, and is he evil, too? Were those blood sacrifices for her, in order to keep her satiated? What would happen if she hadn't been fed? And perhaps most importantly, has she been naked this whole time?!

It's also possible she won't be as big of a concern as she seems. Wynonna showrunner Emily Andras told Us Weekly that "the villains this year are a little bit down and dirty, human, grounded, and personal, and it makes it all very intimate and fun," which implies that, evil as she is, Eve may not be the Big Bad. Andras expanded on these comments on The Official Wynonna Earp Podcast, saying, "When I said [the season] was about family and I said we'd see all sorts of families this year, I would say that maybe that also applies to the villains."

Perhaps the showrunner is referring to Valdez? While we learn this episode that she died keeping the portal closed, something suggests this isn't the last we've seen of her — or her daughter Rachel. Whoever this Big Bad winds up being, it's obvious that, since Wynonna doesn't have her powers anymore, it might be Waverly who has to fight this time around.