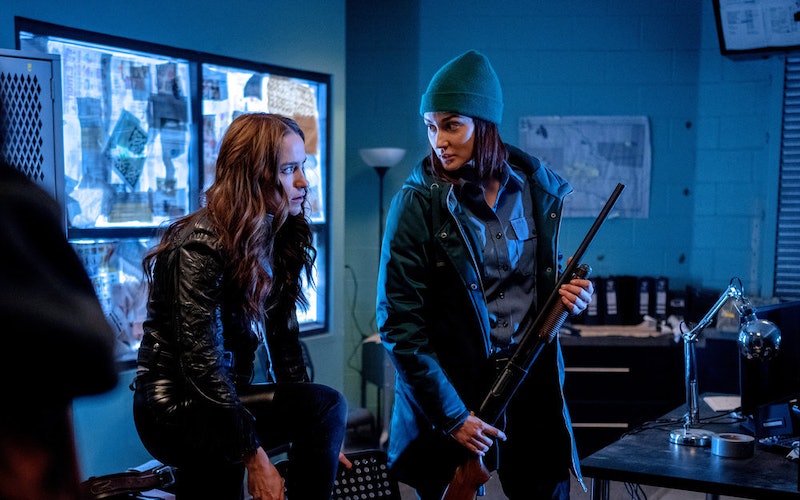 Spoilers ahead for the Season 4 premiere of Wynonna Earp. It was clear from Season 3 that Valdez would be a big player in Wynonna Earp. But in the long (and I mean long) anticipated Season 4 premiere, she's nowhere to be found. Instead, it's revealed that Valdez — whose full name is Dr. Gloria Valdez — was Killed in Action. At least, according to her Black Badge file Wynonna finds. But when she and Nicole Haught discover Valdez's daughter Rachel (series newcomer Martina Ortiz Luis) snooping through an abandoned Black Badge facility in Monument, she explains that her mom took off and left her there, after which Xavier Dolls (RIP!!!) stepped in. Valdez had been working on something in the facility's lab, which BBD later gassed, turning their employees into zombies.

Rachel is convinced that her mom is still alive, since Valdez isn't in the sealed-off lab (which later becomes very much unsealed, thanks to Wynonna pulling a Leeroy Jenkins). We don't learn much else about Valdez in the episode, but fans of the comic book the show is based on should already be familiar with the character. During San Diego Comic-Con in 2019, comic book writer Beau Smith described her as "a possibly thousand-year-old princess warrior from the Mayan era" who has "been with Black Badge since its creation," per TV Insider.

As for her personality, Smith compared Valdez to "Xena, Warrior Princess crossed with Spock from Star Trek. She doesn't suffer fools and your head could end up on the [top] of her war club." It's also clear that much like Doc, Valdez hasn't picked up too many social cues during her long lifespan, saying things like, "The cowboy dentist articulates wisely."

That said, fans should expect the TV iteration of Valdez to be a bit different. "Valdez may not be what you think it is or she is," showrunner Emily Andras told Bustle during New York Comic-Con in 2019. Though Andras praised Smith's "beloved" character and her "legacy of badassery [and] warriorness," she said that "whatever Valdez is will be a little bit different than expected, but hopefully with a wink and a nod to the comic book."

We still don't know where Valdez is or if she's even alive, but she's likely going to show up soon. As Mercedes asked Wynonna, "How did she carve up your wall if she's Val-dead?"