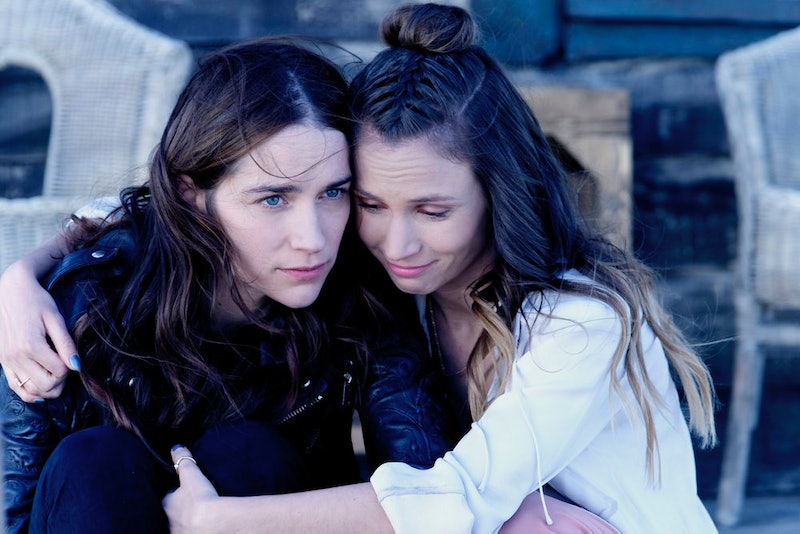 Spoilers for Wynonna Earp Season 3, Episodes 11 and 12. Where to begin? The Wynonna Earp Season 3 finale aired Friday, Sept. 28, at 9 and 10 p.m. ET, respectively, and answered several, long-unanswered questions. For one, Charlie (Sebastian Pigott), the hot firefighter, is revealed to be Waverly's father, Julian. Surprise! What's more, Doc (Tim Rozon) returns to his crotchety but non-evil self after ingesting Julian's supernatural blood two episodes back. And then there's Peacemaker, which reverts to its original form as a flaming sword. But all of this pales in comparison to what's in the Garden of Eden on Wynonna Earp, which is a mystery that largely goes unsolved for now.

To paraphrase Hilary Duff, let's go back to the beginning. The beginning of the world, that is. Audiences will recall that Bulshar has been trying to get into the Biblical garden for some time now, but it wasn't until these last two episodes that he got close. The Big Bad has been mad busy, first kidnapping Wynonna (Melanie Scrofano), then recruiting Bobo Del Rey (Michael Eklund) as his lieutenant. Finally, he turns himself mortal by obtaining Wynonna's blood, which unlinks their fates and breaks the Earp curse. And while this theoretically allows him to enter the garden, that's obviously not what happens.

Speaking of the garden, Julian has a rough go of it in these episodes, too. Not only does he first rise from the dead and then regain his memory, thanks to Waverly's (Dominique Provost-Chalkley) ring (which is actually his), but he provides some much-needed historical context. The angel tells Wynonna that he was tasked with protecting the Garden of Eden, alongside Juan Carlo. "I watched humanity flourish, get tempted, and fall — all at the hands of a snake," Julian says. The snake in question is Bulshar, and he wants to get into paradise, presumably to finish what he started.

Julian explains that he didn't leave his post except when he met Wynonna's mother. "Juan Carlo went first, when we saw that Bulshar had returned to the Ghost River Triangle," the angel continues. "He disguised himself as a padre, and we removed the garden security system — a flaming sword. And we sought a champion to wield it — a mortal champion." The champion he's referring to is Wyatt Earp, but the original heir didn't exactly get the job done.

Fortunately, Wyatt's great-great granddaughter is determined to finish what he started. Wynonna manages to convince the revenants to fight with her against Bulshar to break the vicious cycle once and for all. After an epic showdown at the Earp homestead, Bobo kills Julian (RIP, hot firefighting cherub), who had given up his strength to heal a wounded Nicole. What's more, the angel had given Waverly his ring, which she uses to kill Bobo. "You could have been better than this," she tells the revenant as she sears his face off with her hands. It's true that Bobo's had many opportunities to change, but ultimately chooses to align himself with Bulshar.

But, as always, the fight comes down to the unbreakable bond between Wynonna and Waverly. "Two sisters," Waverly says. "Am I your backup?" Wynonna steps close and says, "I think we both know I'm yours." Since the Earp heir has become ordinary again, she doesn't have that supernatural prowess anymore. And although her opponent is just as killable, Bulshar has begun his transformation into a snake. The big bad has some disturbing new moves, like disappearing into thin air and swiveling his head around. Is anyone else getting Voldemort vibes?

Fortunately, Waverly thinks fast, and removes a sword from where Bulshar has inserted it into the staircase, which leads to the garden. "Only a hero can wield the flaming sword against a demon," he tells the youngest Earp. Waverly, however, is not impressed. "Or heroine," she says, nonchalantly. "And only an angel can name one. My dad taught me that right before you killed him." She then turns to her sister and says, "Wynonna Earp, you are chosen." The gunslinger catches Peacemaker, which immediately starts flaming. So does that mean Wynonna is the heir again? Or perhaps a new kind of heir? After all, she's been tasked at protecting the garden, which is what Wyatt was supposed to do, too.

Whatever the case, Wynonna successfully stabs Bulshar. But before he dies, he reaches up with his gross snake head and bites her. Fortunately, Doc appears and sucks the venom out of her neck just in time. Although there's a lot of weird stuff going on between them (Doc just killed Charlie/Julian two episodes ago, after all), there isn't enough time to talk through their concerns, as some bloodied roots reach out of the garden door and start dragging Waverly into paradise. And while Wynonna can't get through the force shield protecting the garden, Doc is. "It's no fair that I can't come with you," she tells the vampire as he begins climbing the stairs. "Not this time, love," Doc responds. "You're the guardian, and you are the only one who can wield the flaming sword."

Audiences will recall that in Episode 10, Kevin explained that Waverly would need to take her place on her father's throne in order to save the world. Unfortunately, this would also mean that the garden would be sealed, and Waverly would consequently turn to stone. And while it's not clear whether that happened, it's pretty unfathomable that there would be a Season 4 without the angelic Waverly. And since Doc follows her into the garden, Julian's daughter stands a fighting chance.

Back at Shorty's, Wynonna sees a retired Nedley (Greg Lawson), who is straight-up rocking a Hawaiian button-up. He tells her that everyone has vanished from Purgatory. Fortunately, she and Nedley are about to find out what exactly is in the Garden of Eden. And perhaps they'll discover what in the world Valdez is, since it's been scratched into the staircase at the homestead. Does this have to do with the garden, or it a completely new mystery?

"Something in the garden was trying to come through," Wynonna tells Nedley. "I thought it was supposed to be paradise." So whatever ends up being in the Garden of Eden, it's anything but the carefree utopia they were expecting. And Wynonna isn't just going to sit back and let her sister turn to stone without one hell of a fight. Especially since Waverly and Nicole have a wedding to plan.