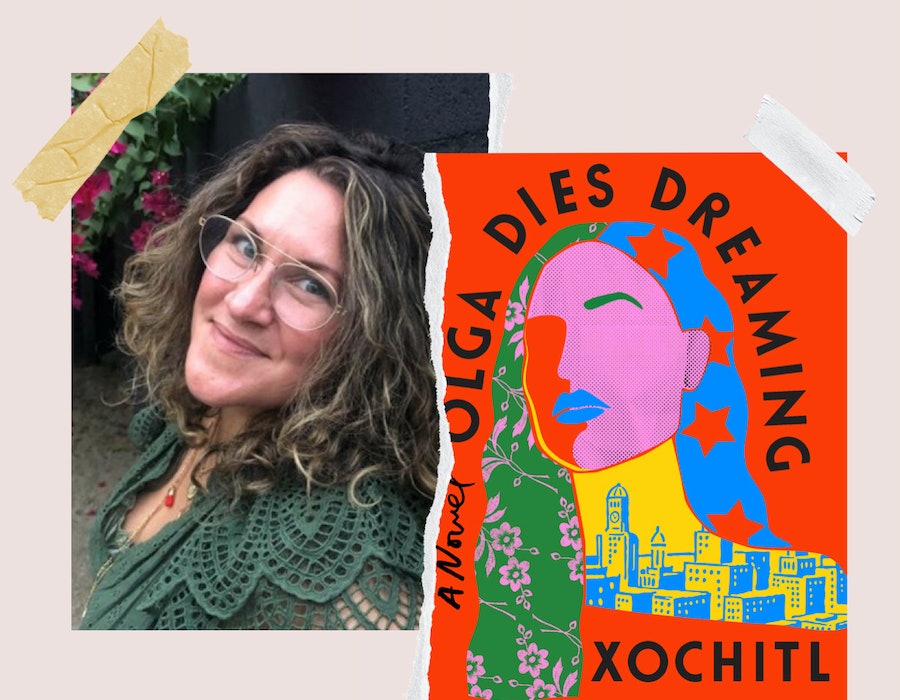 Xochitl Gonzalez doesn’t yet hold an M.F.A. from the Iowa Writers’ Workshop. But her decision to attend — and sell her successful wedding planning business to do so — has already paid off in spades: Gonzalez landed her first book deal in a ten-way auction last year, cementing her status as a rising literary star.

The author’s debut novel, Olga Dies Dreaming, is slated for release in early 2022 from Flatiron Books. Bustle is excited to reveal a first look at its eye-catching cover — and an exclusive excerpt from the opening of the novel — below.

Olga Dies Dreaming follows Olga and Prieto, a pair of successful New York siblings with Puerto Rican roots, as they navigate a tense reunion with their estranged mother, Blanca, in the days leading up to the devastation of Hurricane Maria. Nearly 30 years ago, Blanca — a member of the Young Lords — left her two children behind to become a militant activist. By the time 2017 rolls around, her children have carved out their own paths: Prieto’s become a Congressman representing their Latinx Brooklyn neighborhood, and Olga has established herself as a wedding planner to the New York elite. But as the storm approaches Puerto Rico, so does Blanca come back into her children’s lives, forcing them all to reckon with their family legacy.

Xochitl Gonzalez’s Olga Dies Dreaming is out on Jan. 11, 2022 and is available for pre-order now. You can read the book’s first pages below, exclusively on Bustle.

The telltale sign that you are at the wedding of a rich person is the napkins. At the not-rich person’s wedding, should a waiter spill water or wine or a mixed drink of well liquor onto the napkin-covered lap of a guest, the beverage would bead up and roll off the cheap square of commercially laundered polyblend fabric, down the guest’s legs, eventually pooling on the hideous, overly busy patterned carpet designed and chosen specifically to mask these such stains. At the rich person’s wedding, however, the napkins are made of a European linen fine enough for a Tom Wolfe suit, hand-pressed into smooth order and trimmed with a gracious hemstitch border. Should the waiter spill any of the luxury bottled water, vintage wine, or custom-crafted cocktails designed by a mixologist for the occasion, the napkin would, dutifully, absorb any moisture before the incident can irritate a couture-clad guest. Of course, at the rich person’s wedding the waitstaff don’t spill things; they have been separated and elevated from their more slovenly, less coordinated brethren in a natural selection process of the service industry that judges on appearance, gait, and inherent knowledge of which side to serve from and which to clear. The rich person’s wedding also never features hideous carpet. Not because the venue or locale might not have had one, but because they had the money to cover it over. And not necessarily just with another nicer, more tasteful carpet, but with hardwood flooring, black and white Havana-inspired tiles, or even actual, natural grass. These, though, were the more obvious markers of wealth at a milestone life celebration for the rich person, and while Olga Isabel Acevedo’s job required her to worry about all of these elements and more, the present moment found her primarily concerned with the napkins. Mainly, how she could steal them when the party was over.

“Carlos!” she called out to the authoritative-looking waiter who was leading the caterer’s setup team. “Carlos, let’s talk about the napkins.” He eagerly made his way over, followed by three of his other black-clad compatriots.

The rich person’s wedding not only had better napkins, it had elaborate plans for them as well. They were manipulated into intricately folded shapes and wrapped around lavishly printed menus or adorned with anything ranging from single-stemmed flowers to braided ribbon to — on one occasion, of which Olga was particularly proud — a leather band burnished by a miniature branding iron. (The groom: a fourth-generation cattle rancher.) Olga demonstrated a complex pleating pattern, which was then placed on a diagonal across the display plate, with a place card then set atop that.

“Now Carlos, it’s critical — critical — that the napkins be placed at exactly thirty-degree angles from what would be twelve o’clock on the plate, and even more critical that the place card be set parallel and not perpendicular to that angle. The mother of the bride said she might do some spot checking with her protractor, and after a year of working with this woman, I’d say odds are high that she actually does it.”

Carlos nodded with understanding, almost as if he knew that the mother of the bride had an advanced degree in geometry that had been gathering dust for the past thirty years while she reared her brood and supported the career of her automobile CEO husband, and that she had chosen to channel her intellectual frustrations into the anal-retentive micromanagement of her eldest daughter’s wedding. Of course, Carlos knew none of this, but, having been in the business for decades, he didn’t need the specifics to understand the importance of executing the task at hand with precision. (The wedding of a rich person also had, at least for the workers involved, the looming possibility of litigation hovering in the near future. Not-rich people’s events had forgettable glitches. Gaffes to the ultra-wealthy were unforgivable grievances that only the courts could remedy. A recent tale of a florist in fiscal ruin because she substituted an Ecuadorian rose for an English one after her shipment was stuck in customs had struck a nerve. Everyone, from the delivery guy to the wedding officiant, was on their toes.)

“Now listen,” Olga continued, “these were custom made just for the wedding, and the bride wants to have them for her house —”

“What’s she gonna do with three hundred napkins?” one of the waiters interjected. He was clearly new.

“Six hundred, actually,” Olga offered. “Always good to have extras, right?” The staff laughed. “She claims they’ll be heirlooms. Point is, we need to be sure that we keep these separate from the rented linens at the end of the night; got it?”

The waiters collectively nodded and, like a colony of ants given orders from their queen, ran off to execute the said napkin plan. Olga did some mental math. It would take six pairs of hands another four hours to create an optic that the guests would undo in seconds with the flick of a wrist — 290 guests, to be exact. Barring a crazy incident — some overgrown frat boy spraying the bridesmaids with champagne, say, or a drunken guest knocking over the croquembouche display — they should end the night with between 150 and 175 brand-new beautiful linen hemstitch napkins that she could take for her cousin Mabel to use at her wedding that fall.

Of course, it hadn’t always been this way. Yes, Mabel had been a loudmouth girl who developed into a loudmouth, know-it-all woman, but despite this they had been, in their youth, quite close. Slowly, though, a rift had formed and expanded. Then, last year, at age thirty-nine, Mabel was concurrently promoted to mid-level management at Con Edison and proposed to by her long-term boyfriend. The combination rendered her insufferable. Olga was only a year or so older, and for the entirety of their lives Mabel had been in a one-sided competition with her where action of any sort in Olga’s life was interpreted by Mabel as a sign of aggression and met with a “So, you think you’re better than me, huh?” Truth be told, for most of their lives, using a traditional American metric for measuring success, Olga was better than Mabel. Olga had left Sunset Park, gone to a fancy college, started her business, was featured in magazines and on TV, had traveled the world, and gone to dinners costlier than one of Mabel’s paychecks. But now, with this engagement, Mabel was going to achieve something Olga never had: being a bride. Never mind that Olga bristled at the idea of third dates, let alone marriage. To Mabel, in this one arena, she had finally won, and she was not about to let her victory go unnoticed. On Christmas Eve, drunk on coquito, she waved her engagement ring in Olga’s face repeatedly, saying “Julio got it from Jared’s, bitch, what did you get? That’s right, nothing.” At the bridal shower that her family pressured her to host because “she’s the one with all the party hookups,” Mabel gave a special toast to her “cousin Olga, who can help the brides, she just can’t get a groom.”

Olga had taken this in stride. Primarily because if finding someone like Julio to be tied to for all eternity was the one contest she would lose to Mabel, then she had chosen well. She was equally placated knowing that, when the time was right, she would think of the perfect fuck-you gesture to take just a bit of wind out of Mabel’s sails on her wedding day. Just the right little something to be the pebble in her shoe when she reflected on the day. It was during her sixth meeting with Mrs. Henderson, the mother of today’s bride, specifically about the topic of napkins, when the idea came to her and she was immediately filled with delight, knowing that she could strike two birds with one tiny stone.

From the beginning, Olga knew the napkins were going to be the “thing” with this event. At every first meeting with a client there was one comment casually uttered that Olga filed in her mental Rolodex, knowing that, in several months’ time, she would spend hours or even collective days dealing with what had been a seemingly innocuous statement or question. So it was when Mrs. Henderson and her daughter came in the first time and, just as they were about to sign Olga’s pricey contract, Mrs. Henderson exclaimed, “We didn’t speak about one of the most important things! The napkins! I do hate when they leave lint on your gown.” Olga agreed immediately and waxed on about that and a number of other nuanced considerations regarding table linens. Within moments, the paperwork was signed, and Mrs. Henderson was phoning their “money person” to deal with the matter of getting Olga her not-insignificant deposit payment. With her one comment about lint, Mrs. Henderson had revealed herself to be, at best, neurotic and at worst, crazy. Olga had only quoted them her fee for normal rich people. Anxiety consumed her when she realized she had not charged them nearly enough.