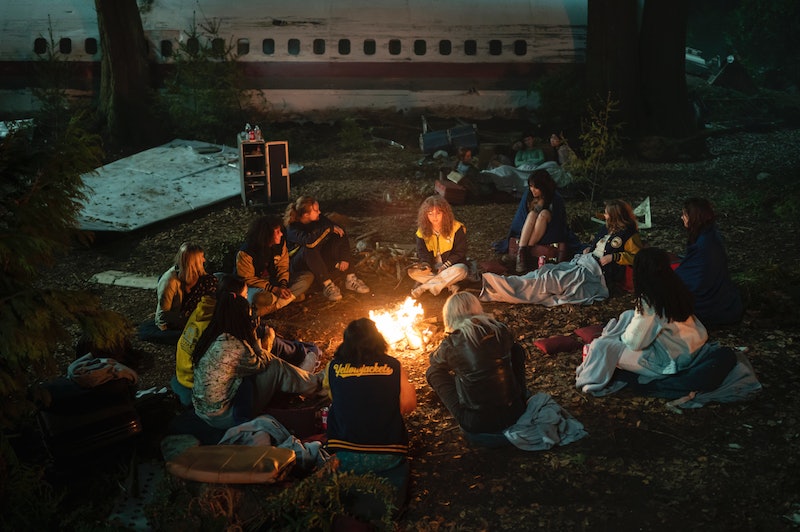 If you’ve ever wondered what Lord of the Flies might be like with even more barbarism, you might like Showtime’s new drama series, Yellowjackets. Premiering on Nov. 14, the show similarly explores what happens when a group of young teens becomes stranded in the wilderness — in this case the Wiskayok High School Yellowjackets, a talented girls soccer team who wind up deep in the deserted woods of Ontario after surviving a plane crash. Over the next 19 months, they devolve into their most primal selves, eventually resorting to full-on cannibalism. The series toggles between their experiences in the ‘90s and the present day, as the surviving women attempt to move past the horror and trauma they endured — and inflicted.

Though not based on a true story, Yellowjackets brings to mind the infamous case of Uruguayan Air Force Flight 57. In 1972, the flight — which was carrying members of a Uruguayan rugby team along with other passengers — lost both of its wings and crashed in a remote region of Argentina, near the Chilean border. Rescue teams later shifted their attention to the Andes, however, the brutal snowy terrain made it hard to detect anything, and the search was called off. Of the 45 people on board, 11 died immediately, while those who survived the crash were stranded in the Argentinian mountain range for 72 days. Their already dire straits were made worse when the fuselage they were using for shelter was damaged in an avalanche. In the end, only 16 people survived the entire ordeal, with some resorting to cannibalism (though they only ate the bodies of those who had already died). A movie, Alive, was made about the incident in 1992, retelling the tragedy in a very stylized and dramatized fashion.

Despite the similarities, Yellowjackets was not inspired by Flight 57. Instead, the idea for the show came to co-creator Ashley Lyle after she read that a film about a gender-swapped version of Lord of the Flies was in production. Responses to the project were skeptical, with many commenters expressing doubt that young girls were capable of reaching the same level of violence and anarchy the boys did in William Golding’s original 1954 novel. Lyle scoffed. “There was a girl in my high school who poisoned another girl’s food for fun,” she told the New York Times. “Only showing girls getting along is not painting a full picture.”

A cross between a horror story and a tale of survival, Yellowjackets employs cannibalism, ritual murder, hints at the supernatural, and yes, poisoned food while pushing the audience to wonder if the girls are driven to brutality by some malevolent force or just starvation, delirium, and pure human instinct. But what Lyle and the cast wanted to capture most is how vicious female adolescence can be even outside of an ordeal as devastating as the one the Yellowjackets experience. “There’s a very specific feminine way of brutalizing each other,” Tawny Cypress, who plays the older version of the team’s enforcer Taissa in the show. “We can cut without weapons.”

It’s in that sort of mundane and interpersonal brutality that Yellowjackets is able to form its deepest tether to real life. “The way we’re looking back at girls’ and women’s lives of that period, it’s interesting that we’re finally reckoning with the ways that our culture specifically chews women up and spits them out then blames them for landing in a million little pieces,” Yellowjackets executive producer Karyn Kusama told The Ringer. “I think it’s really interesting to have Yellowjackets come out now and be speaking to that moment in the culture that’s hopefully interrogating itself a little bit more.”

Kusama added that the show bears some resemblance to Jennifer’s Body, the cult horror film she directed in 2009 starring Megan Fox as a high schooler possessed by a demon who kills her male classmates. “I think what appeals to me ... is the expression of hunger, and the ways that women are starved and [have] starved themselves. I mean that in a literal way and a metaphorical way,” Kusama said. “Something about that just kept bubbling up for me, in both Jennifer’s Body and in Yellowjackets — the drama of having to make things right with your own physical self.”

Unfortunately for the women of Yellowjackets, the process of making things “right” may be more arduous than surviving the Canadian wilderness.

More like this
The Plane Crash In 'Dear Edward' Is Based On A 2010 Tragedy
By Grace Wehniainen
'The Last Of Us' Episode Schedule Competes With The Super Bowl & Oscars
By Brad Witter
Grammys Host Trevor Noah Made Adele's Dream Of Meeting The Rock Come True
By Brad Witter
Pedro Pascal Barely Got Through The "Lisa From Temecula" 'SNL' Sketch
By Stephanie Topacio Long
Get Even More From Bustle — Sign Up For The Newsletter
From hair trends to relationship advice, our daily newsletter has everything you need to sound like a person who’s on TikTok, even if you aren’t.