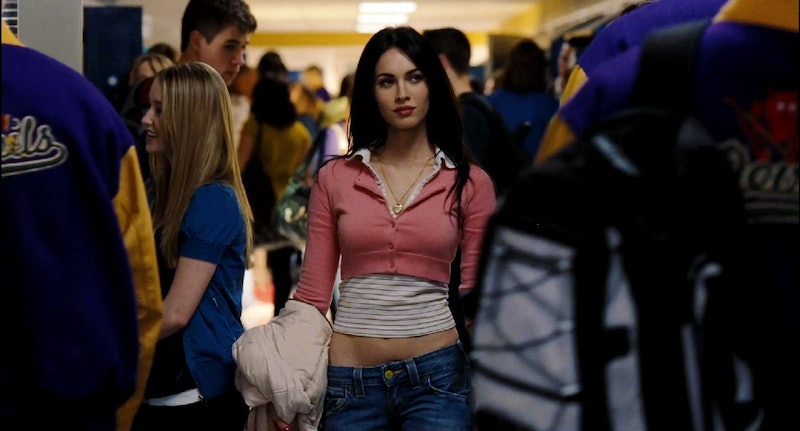 Back in September 2009, Vic Holtreman at Screenrant decided to do a test. The Megan Fox-starring horror comedy Jennifer's Body had just come out, and despite not making much at the box office, the movie had already begun to cause serious controversy. For all the positive reviews and fan reactions that praised the film's feminism and Diablo Cody-penned script, there were just as many scorching ones, responses that railed on the film's supposedly bad writing, weak acting, and ludicrous plot. Yet Jennifer's Body 's critical divide stood out from that of most other movies — because, as Holtreman noted, the reactions the film garnered seemed to be totally split by gender.

Of the 103 reviews culled by the site, only 39 percent of male critics claimed to like the movie; female reviewers, meanwhile, stood at 54 percent. Yet despite this clear divide, it felt at the time like Jennifer's Body was a critically panned film, and nothing more; any good reviews it got (mostly from women) were swept under the rug by the many loud, long reviews (mostly from men) condemning its every frame. Despite resonating strongly with women, the movie was engulfed by negativity, much of which was aimed at its women-led plotlines and largely female creators, a sad truth that its director, Karyn Kusama, is all too aware of.

"Oh, yeah," she says immediately, when I ask if she feels Jennifer's Body got more negative attention than it deserved, due to it having women predominantly drive its plot, cast and crew. "Some films by women get a level of scrutiny that is sort of disproportionate to what’s in front of them, or what the reality is."

As Holtreman pointed out, only 26 of the reviews for the movie at the time were written by women, and thus more likely to be positive, while a whopping 77 were written by men. Many of the things the male critics dismissed as "silly" or "nonsensical" — such as the teenage girls' complicated friendships and Juno writer Cody's script — were the same ones women critics praised the most for being painfully true. Wrote EruditeChick AT AllThingsFanGirl about one scene, "Most of the men I’ve heard talk about the film mention that moment in particular as being cringe-worthy and corny, and most of all bizarre. I have not yet spoken to a girl for whom that scene did not resonate, didn’t hit something deep in them." Echoed Mary Pols of Time , "Their depiction of the ways in which women like Needy are willing to compromise themselves to indulge an ultimately less secure friend is spot-on."

Yet despite this praise, Jennifer's Body seemed to face an uphill battle from the moment it arrived in theaters. It certainly wasn't alone in this regard; remember when Bridesmaids came out, and it was treated not just as a box office success, but as a symbol of feminism and all of womankind? Or perhaps you recall the uproar surrounding last summer's Trainwreck , in which practically every critic in America weighed in on whether the movie's R-rated, women-led escapades were "groundbreaking" or anti-feminist and "conventional"? And it's a double standard not just found in film; as many have noted, Hillary Clinton's presidential run has been analyzed from angles — does she smile enough? Is her outfit OK? Do women need to vote for her, simply because she's a woman? But these discussions simply aren't present in the candidacies of male politicians. No matter the field or status of a woman or a woman-led project, no one, it seems, is immune from excessive, gendered criticism.

At the time of her movie's debut, Kusama says she was "definitely aware" that Jennifer's Body seemed to be receiving so much more vitriol than your typical film, although she tried not to think about it too much; she says, and it's easy to understand why, that she doesn't "really look back all that much to ask myself would I have done stuff differently." In addition to Jennifer's Body, Kusama has directed the boxing drama Girlfight, the sci-fi film Aeon Flux, and this month's horror flick, The Invitation — and while some of her films have received major acclaim (Girlfight won Sundance's top prize in 2000, and The Invitation is already getting strong reviews) the others, like Aeon Flux and Jennifer's Body, have earned plenty of disdain. Kusama has learned enough over the years not to look back in regret or dwell on what could've been, but that doesn't mean the criticism, especially for Jennifer, doesn't frustrate her.

"I loved the cast. I really liked my collaborators," Kusama says. "It was just unfortunate timing, I guess."

By "timing," she's referring to the fact that during the year of Jennifer's Body release, its screenwriter, Cody, and its star, Fox, were everywhere, thanks to Juno and Transformers, respectively; with that oversaturation, plus the early rise of Twitter, Jennifer's Body couldn't have come at a tricker time. People are still all too happy to share their negative thoughts on social media, of course ("we live in a world where verbal assault is kind of like a free-for-all zone," Kusama notes), but with Twitter just taking hold in 2009, I'd imagine that the blows to Jennifer's Body felt especially rough.

Still, Kusama says that despite what happened, there's nothing she would change about the movie, and the reactions people had to it were obviously out of her control. But that's not say that her experience on Jennifer's Body didn't affect her at all, especially when it came to the promotion of women-led work.

"We still have a really long way to go, not just in terms of women getting their first films made, but women getting their second and third and fourth films made, and getting them made in an environment that treats them like artists," Kusama says. "That's the challenge — finding those opportunities and essentially growing those opportunities so that more women can get to be really vital voices in the filmmaking landscape."

For her, that means continuing to help bring complex women — like Charlize Theron's warrior in Aeon Flux or Amanda Seyfried's Needy in Jennifer's Body — to the screen. And so with her latest movie, The Invitation, the director partnered with Gamechanger Films, a production company that helps finance independent films made by women. Founded in 2013, the company has played a part in getting films like Addicted to Fresno and Lovesong to the screen, and The Invitation, which features an ensemble, co-ed cast and, of course, a female director, is a perfect next fit. Kusama says she's grateful for the company for being "quite literally willing to put their money where their mouth is" when it comes to getting her film, and others like it, made.

"We need to be seeing women who challenge us and disturb us and make us uncomfortable and make us think."

"A lot of people can pay lip service to the idea of wanting to see more women behind the camera, but Gamechanger actually finances that desire," she says.

Next for Kusama is a movie she calls a "hybrid of genres," and she's hoping to start production on it soon. She won't share many details, but says that it'll feature "a fascinating woman at the center of it," just like all her previous works. Says the director, "What we need to be seeing isn't just women in movies... we need to be seeing women who challenge us and disturb us and make us uncomfortable and make us think."

And while she's aware that doing those things doesn't always land well critically (she readily admits that her movies have had "varying levels of success"), she knows showing complicated on-screen women is too important to simply not try. The haters can hate, but Kusama is responsible for some of film's most interesting female characters, and that's something no critic can take away.

More like this
24 History-Making Black Women You Probably Didn't Learn About In School
By Ayana Lage and JR Thorpe
25 Inspiring Quotes From Black Women To Celebrate Black History Month
By Kyli Rodriguez-Cayro and JR Thorpe
'Knock At The Cabin' May Start Streaming Sooner Than You’d Think
By Jake Viswanath
Reese Witherspoon Confirms This Fan Favorite Will Return For 'Legally Blonde 3'
By Jake Viswanath
Get Even More From Bustle — Sign Up For The Newsletter
From hair trends to relationship advice, our daily newsletter has everything you need to sound like a person who’s on TikTok, even if you aren’t.