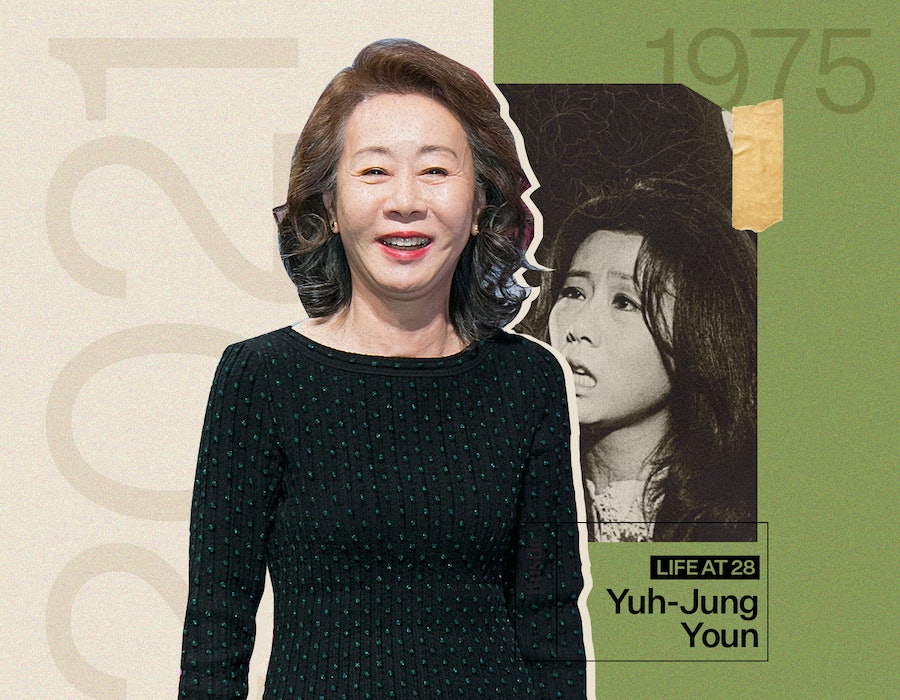 In her early 20s, Youn Yuh-jung made a name for herself playing femme fatales. After her first movie Woman of Fire — a 1971 psychosexual drama centered on a love triangle — was a smash hit in Korea, a spate of similarly provocative roles followed. But by the time she was 28, Youn left it all behind to move to the United States so her husband could attend school in Florida.

“People would ask me, ‘Don't you miss what you were doing in Korea? You're very talented, you should go back and be an actress again,'" she tells Bustle. Youn gave birth to a son soon after arriving Stateside and between assimilating to a new country and adjusting to motherhood, it was a difficult time in her life. Still, Youn was steadfast in her decision. "I didn't really know if I was talented, so [their comments] didn't really get to me. I didn't feel any [regret], I was just concentrating on raising my boy.”

In Florida, Youn worked hard to start over. She found solace in church, and it was there that she made the friends who became her lifeline. “They didn’t understand that before this, I was an actress, so I didn’t know how to cook,” says Youn. “They taught me [things like how] to bake cookies.” After a decade in the States and a divorce, Youn moved back to Korea, where she ultimately found her way back to acting — once again finding success in her home country.

Now, at 73 years old, the screen legend is finally making her Hollywood debut with the critically beloved Minari (which you can now watch in theaters or On Demand). The film follows a Korean family that immigrates to rural Arkansas in the 1980s in hopes of starting a farm. And Soonja (Youn), the unruly and often naughty grandma of the brood, comes from Korea to live with the family on the land. While the film has been celebrated as a whole, Youn's performance is also garnering buzz. She's already become the first Korean actor to be nominated for a SAG award in the Best Supporting Actress category, and there are whispers of an Oscar nomination this season. “Whatever. Being an Asian woman, we only watch the Oscars on the television, I never dreamed of a nomination," she says, defiantly dismissing the rumors. Below, Youn muses on immigrating to America, working with famed Korean director Kim Ki-young, and becoming a mother.

My first boy was born in 1975, so I remember exactly what happened to me. At the time, I had just moved to the States. It was my first time being in America and I was living in St. Petersburg, Florida. My husband was a student, so we were here on a student visa. My hope was just to raise my son and I was trying to read all the [parenting] instructions because international phone calls were very expensive, so talking to my mother over the phone [for advice] was hard.

Your first ever film, Woman of Fire, was a massive hit. Could you have ever predicted that you would have been a breakout star in your early 20s?

Next you made Insect Woman in 1972 and Love and Hatred in 1973. What was it like to leave such recent success behind?

I am a very realistic person, so I knew that when I came to the States that no one would know me. I usually don't look back or think about what a good time I had [previously]. I completely forgot about it and tried to learn how to cook and adjust with my new American friends. They were good friends, they were like my limbs, with their help I started to live in the States.

What was the most memorable moment of your 28th year?

When my first boy was born. The first baby is a very hard labor. The doctor had not delivered an Asian [baby], and Asian boys' skin is different, so they thought he had jaundice because his skin was yellow. But no, he was OK!

Did motherhood come easily to you?

No. It was a really hard time. The doctor told me, "Don't answer the phone while you are giving the baby a bath. You might drop the baby and grab the phone and the baby will drown in the water." So after he mentioned that, every time I gave him a bath I was scared. It was a lot of pressure!

What made you move back to Korea and start acting again?

After my second boy was born, I [had been] living in Florida for 8 or 9 years. My ex-husband was a very famous singer in Korea so he was back and forth for concerts, and then we moved back to Korea and ended up getting a divorce. So I became a single mother and had to look for a job again.

It has been decades [since I acted] and not many people remembered me. There was no place for me to get a role, so I thought I’d go back to Florida. I was thinking of what kind of jobs I could get as a single mother, and all I could really do was get a job as a cashier at a grocery store. Then one of my friends said, "Don’t be stupid, you are really talented, you are going to have a name [in acting] again." And she was right.

More like this
At 28, Prue Leith Was In A Secret Affair & Sharing Apple Pie With Stoned Neighbors
By Grace Wehniainen
Steve Banerjee's Wife Irene Sold The Chippendales Brand Prior To Her Death
By Brad Witter
Khloé Kardashian’s Son Was Born A Week Before Anyone Realized
By Jake Viswanath
Kim K Reveals The Advice Demi Moore & Kendall Jenner Gave Her For A Runway Show
By Jake Viswanath
Get Even More From Bustle — Sign Up For The Newsletter