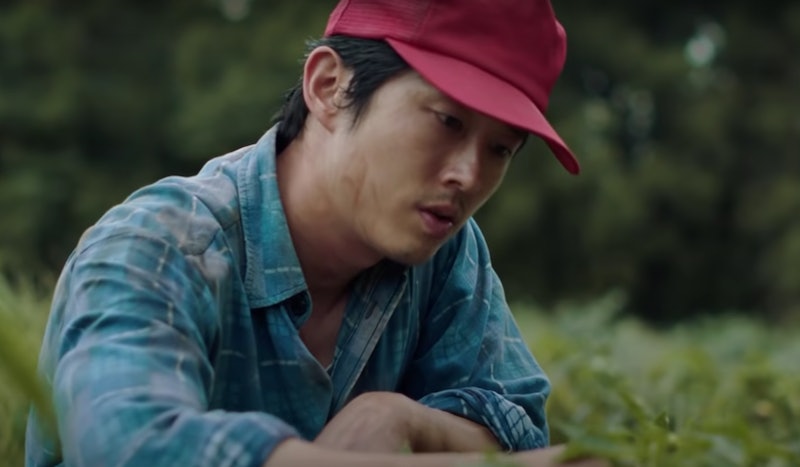 Among the many snubs concerning the upcoming 2021 Golden Globes (I May Destroy You, Euphoria, Jurnee Smollett and Jonathan Majors for Lovecraft Country), one particular film stands out. Lee Isaac Chung’s drama film Minari, has been deemed ineligible for Best Picture, and is instead nominated in the Foreign Language Film category despite the film’s American production company (A24 and Brad Pitt’s Plan B Entertainment), American director (Chung), and American lead (Steven Yeun, also notably shut out from any solo nominations). The reason? One of the Hollywood Foreign Press Association’s most controversial rules.

A winner at the 2020 Sundance Film Festival, Minari follows a Korean family that moves to a farm in rural Arkansas in the 1980s in search of the American dream. The film also stars Alan S. Kim, Han Ye-ri, Youn Yuh-jung, and Will Patton. In terms of why Minari didn’t qualify for Best Picture, the reason can be attributed to an old, controversial HFPA rule: if 50% of a film’s spoken dialogue isn’t in English, it can’t be nominated for Best Picture, and is instead relegated to Foreign. Since Minari mostly unfolds in Korean, it doesn’t meet the English threshold.

The particular rule has long been a source of controversy; the HFPA has been criticized in the past for excluding Alfonso Cuarón (Roma), Bong Joon-ho (Parasite), and Lulu Wang (The Farewell) from the Best Picture category in previous ceremonies.

Last December, Wang tweeted her disappointment about the news that Minari would be excluded from the Best Picture category. “I have not seen a more American film than #Minari this year,” Wang wrote. “It's a story about an immigrant family, IN America, pursuing the American dream. We really need to change these antiquated rules that characterize American as only English-speaking.”

In light of the 2021 Golden Globes nominations announced this morning, the discourse is back in the spotlight once again. “The whole point of minari was that it was supposed to be an AMERICAN film about the struggles of a korean-american family in integrating with american society,” one Twitter user wrote. “the fact that it’s put under the foreign language category is just disrespectful to everyone involved and its message.”

Others on Twitter reiterated the message that it is a wholly American film, while some pointed out some possible double standards.

Elsewhere, others expressed their disappointment that Yeun and the rest of the cast were shut out from individual nominations.

The 78th Golden Globe Awards will air on Sunday, Feb. 28 on NBC with co-hosts Amy Poehler and Tina Fey.

More like this
How Andrea Riseborough Got Nominated — & Almost Disqualified For An Oscar
By Jake Viswanath
Alicia Silverstone Revives Her 'Clueless' Character In This Super Bowl Commercial
By Jake Viswanath
Austin Butler Recalls Lisa Marie Presley Showing Him Elvis’ Bedroom
By Jake Viswanath
Pamela Anderson’s Dating & Marriage History Could Be Its Own TV Series
By Jake Viswanath
Get Even More From Bustle — Sign Up For The Newsletter
From hair trends to relationship advice, our daily newsletter has everything you need to sound like a person who’s on TikTok, even if you aren’t.