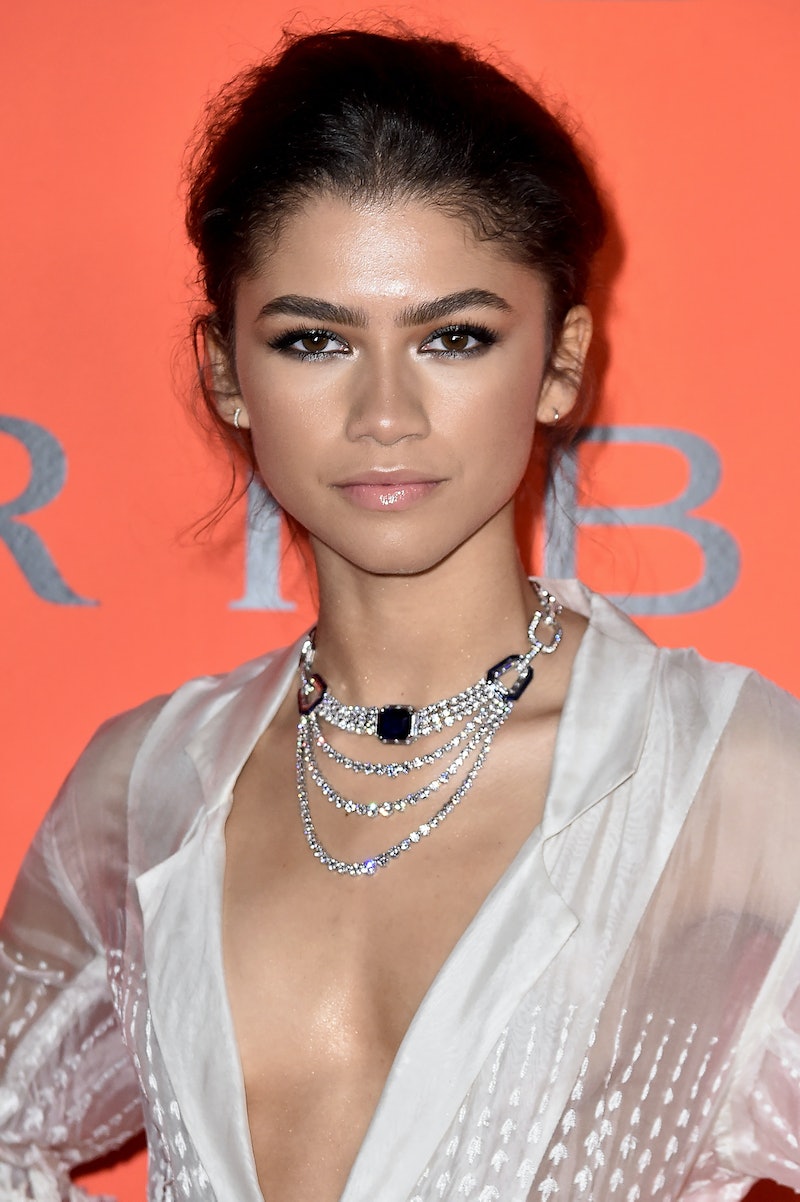 Hunkering down at home amid the ongoing coronavirus pandemic has been challenging, and on Monday, Jan. 11, Zendaya opened up to GQ about having an identity crisis in quarantine. The actor, who has been working steadily since she was 13, said that this was the first year she didn't have any work lined up and that "there was no structure." The abrupt change forced her to confront who she is outside of her career as a singer, dancer, actor, and fashion icon.

"It was my first time just being like, 'Okay, who am I without this?'" Zendaya told the magazine. "I don't really know Zendaya outside of the Zendaya who works." The 24-year-old star also said that all of this time at home taught her a lot about herself, revealing that before COVID-19, she "didn't realize how much my job and my art were a part of my identity as a human."

Pre-pandemic, Zendaya's career was at its peak. She filmed Dune alongside Timothée Chalamet, delivered an Emmy-winning performance as Rue in Euphoria, and was booked to appear in the Spider-Man sequel. Unfortunately, the virus delayed many of the star's upcoming projects, including the second season of the hit HBO series as well as Dune's premiere date.

Zendaya didn't have a definitive answer on how the pandemic shifted her identity, but she did find new ways to keep busy while not working. The actor teamed up with Euphoria director and writer Sam Levinson to create a movie that could be filmed without violating COVID-19 safety guidelines. Together, they conceptualized a romantic drama called Malcolm & Marie, which was filmed in a single location in Los Angeles.

The black-and-white film stars John David Washington as a director whose relationship with his girlfriend Marie (Zendaya) is tested after they return from his movie premiere and wait to hear reviews from critics. The movie will be released on Feb. 5, 2021, and will be available to stream on Netflix. The trailer alone, however, already has fans pushing for Zendaya to earn a Best Actress nomination at the Oscars. "Zendaya's oscar is coming," one fan tweeted after the preview dropped. "It's the right time to start Zendaya's Oscar campaign," someone else wrote.

Furthermore, Variety recently reported that Netflix is already planning an Academy Awards campaign for Malcolm & Marie, so fans' dreams might actually come true. Even without an Oscars recognition, though, Zendaya's proud of the movie they created. "I was like, 'Listen, I'll do whatever,'" she said in an interview on the OTHERtone with Pharrell, Scott, and Fam-Lay podcast last month. "[They] had some weird ideas, like, 'We can literally shoot something in your house. We could shoot in my house and see if we come up with something,' but it kind of turned into something a little bit more special than that."

More like this
Everything To Know About 'And Just Like That...' Season 2
By Jack Irvin and Grace Wehniainen
Everything To Know About Rihanna’s Staggering Net Worth
By Hugh McIntyre
Danielle Cabral From 'RHONJ' Is No Stranger To Reality TV
By Brad Witter
Rihanna’s Collaborators, Ranked By How Likely They Are To Perform At The Super Bowl
By Jake Viswanath
Get Even More From Bustle — Sign Up For The Newsletter
From hair trends to relationship advice, our daily newsletter has everything you need to sound like a person who’s on TikTok, even if you aren’t.