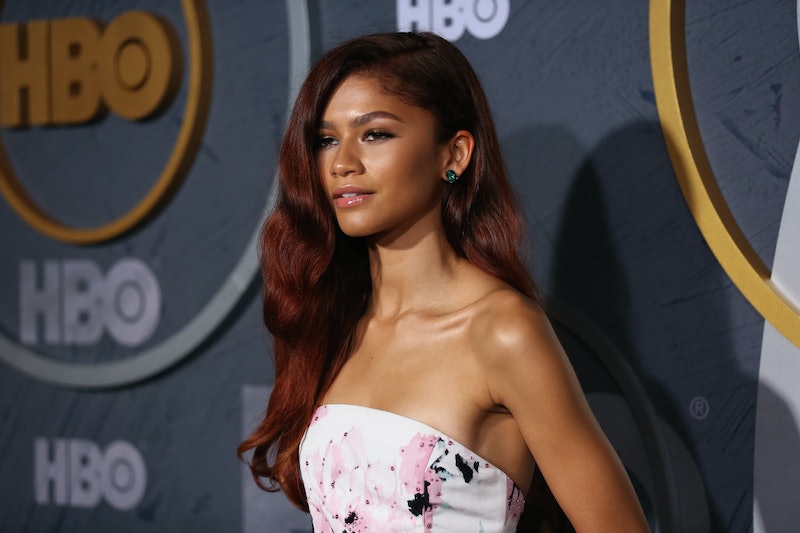 Euphoria fans are no longer being ignored by major award shows. Zendaya was just nominated for her first Emmy, for her role on Euphoria. And fans are already freaking out about it — including Emmy nomination presenters Leslie Jones and Laverne Cox, who announced the 2020 Emmy nominations in a livestream on Tuesday, July 28.

Zendaya has yet to comment on the exciting news, but Euphoria's official Twitter account celebrated her nomination, saying they were "beyond proud" of the star. In addition, her co-star Eric Dane congratulated her on the nod online. "Ker Plow," he wrote on Twitter. "Well done @Zendaya." The Emmy nod follows her wins at the People's Choice Awards for Favorite Drama TV Star and the Satellite Awards for Best Actress in a Drama Series, as well as a nod at the Critics Choice Awards, all of which she received for Euphoria.

Since Euphoria's premiere in June 2019, Zendaya has received wide acclaim for her portrayal of Rue from both fans and critics alike, with fans campaigning for her to be recognized during awards season since the beginning. Needless to say, fans starting losing their minds once they heard news of her Emmy nomination, and saying that they're proud of her would be an understatement.

In a January interview with Entertainment Tonight, Zendaya said she knew that Euphoria was special as soon as she started filming the first season. “I just feel very lucky,” she said. “I just feel like to be able to tell those stories... it felt like something special as I was doing it, and I am grateful that people have been able to connect to it the way they have.”

Luckily for fans who want to see Rue onscreen again (or for Zendaya to get more Emmy nods), Euphoria was renewed by HBO for another season. However, the coronavirus pandemic forced production of Season 2 to be halted right before it was set to begin. “We were supposed to go back to work, I believe, on March 16, and literally, three or four days before that, they were shut down,” Zendaya told Variety in June 2020. "We did camera tests and hair and makeup tests, and we got to see everybody and... the sets were built. The scripts were written and I was just so excited — just to go back home is really what it feels like." Fingers crossed that filming picks up soon and Euphoria Season 2 can air before next year's awards season.

More like this
'The Queen’s Gambit' Season 2 Tweet Wasn’t From Anya Taylor-Joy
By Mary Kate McGrath, Jack Irvin and Grace Wehniainen
Grammys Host Trevor Noah Made Adele's Dream Of Meeting The Rock Come True
By Brad Witter
Netflix Shut Down 'Bridgerton' S3 Rumours About A “Very Dark” Storyline
By Bustle
Twitter Has Renamed Ekin-Su After *That* 'Dancing On Ice' Performance
By Sophie McEvoy
Get Even More From Bustle — Sign Up For The Newsletter
From hair trends to relationship advice, our daily newsletter has everything you need to sound like a person who’s on TikTok, even if you aren’t.