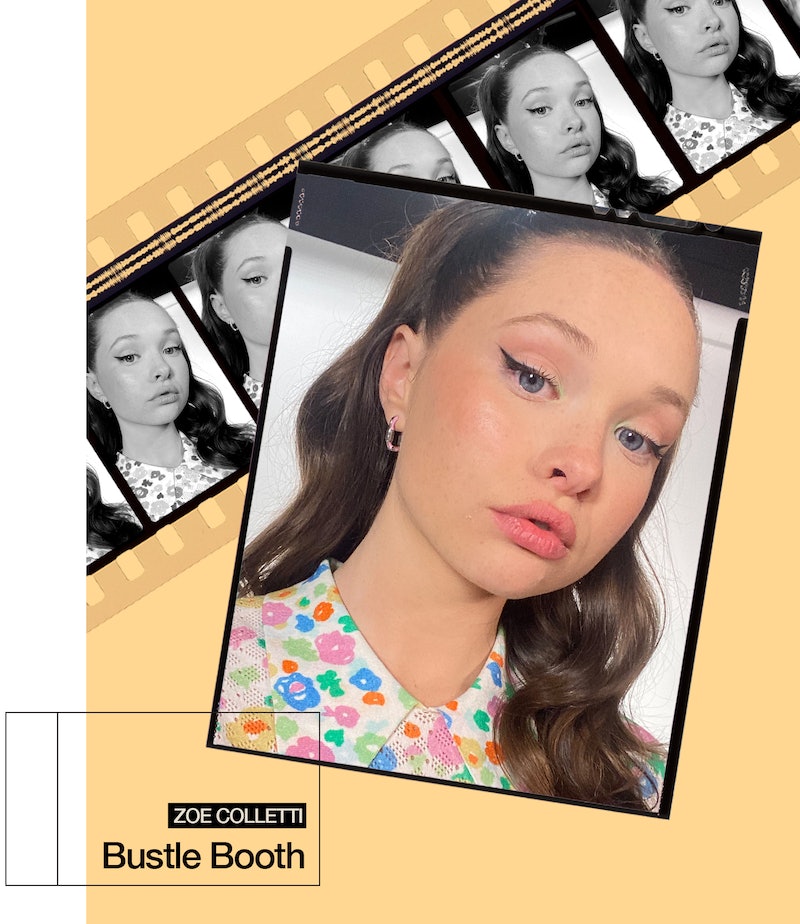 Zoe Colletti’s first foray into acting happened accidentally. Her brother, Ian, was auditioning for a commercial when the casting director spotted 5-year-old Zoe in the waiting room and asked her to read for the sister part. “It was a sausage commercial, which is really glamorous,” Colletti tells Bustle. “I was brutally shy when I was young; I would barely utter a word. My brother got an agent, and the agent didn’t want me because [I] didn’t speak.” Both she and her brother got the part.

Fifteen years later, shy is the last word that comes to mind when you meet Colletti. The 20-year-old actor’s energy is palpable: She talks unbelievably fast, with her New Jersey accent coming out as she speaks passionately about acting and fashion. She showcases her experiments with the latter all over her TikTok, wearing everything from Cabbage Patch Doll-inspired prints to retro statement pieces — and everything loud and colorful in between. “I’ve always marched to the beat of my own drum,” Colletti says. It’s helped her navigate the world of acting without feeling like auditions are a life-or-death endeavor. “I’m doing this for fun, and that has really helped with the mass amounts of gruesome rejection.”

Now, Colletti brings her infectious energy to her character Gia, loyal best friend to recently deceased Erika (Lana Condor) in Boo, Bitch. The Netflix dark comedy, out July 8, follows the tight-knit duo after Erika’s bizarre and untimely death. As Erika grapples with settling any unfinished business on Earth as a ghost, it’s Gia who encourages her to live “life” to the fullest.

Colletti is no stranger to portraying the ups and downs of being a teenager, going from the bratty and murderous Dakota in Fear the Walking Dead to the inquisitive Stella Nicholls in Guillermo Del Toro’s Scary Stories We Tell in the Dark. “When you’re younger, you do get basic ‘teenage roles.’ You’re somebody's daughter; there’s not a ton of meat to the role you’re getting to play,” Colletti says. “But I’ve gotten the opportunity to play young characters who have really cool stories around them.” Her latest daughter role as Steve Martin’s character Charles’ stepdaughter in the new season of Only Murders in the Building is similarly dynamic — her character constantly surprises the detective trio, pushing their investigation in an unexpected direction.

Colletti’s own time as a teenager was also about finding new paths. As a high schooler, she wasn’t worried about fitting in, and she certainly doesn’t care about it now. “I went to a small school, and that didn’t go over super well for me all the time,” she says. Like Gia, she’s boldly herself. “I tend to be a bit awkward or goofy sometimes. If someone says that is weird… then being weird is cool now.”

Get to know more about Colletti in her Bustle Booth questionnaire below.

“Nobody puts Baby in the corner.” - Dirty Dancing

“Don’t Rain on My Parade” from Funny Girl

I would like people to say that I’m a sweet person and that my outfit is cool because I put a lot of effort into my outfits.

Really prioritizing taking care of my mental health and doing self-care, especially with all this Covid craziness and quarantine. Making sure you are taking care of your little sweet brain is so important.

More like this
Everything To Know About Netflix’s 'Never Have I Ever' Season 4
By Jack Irvin and Gabrielle Bondi
Here’s Everything Coming To & Leaving Netflix In August
By Jake Viswanath
Does 'Locke & Key’s Ending Mean There Could Be A Season 4?
By Sophia Moore
Watch The Trailer For Netflix’s Edgy New Comedy 'FAKES'
By Brad Witter
Get Even More From Bustle — Sign Up For The Newsletter