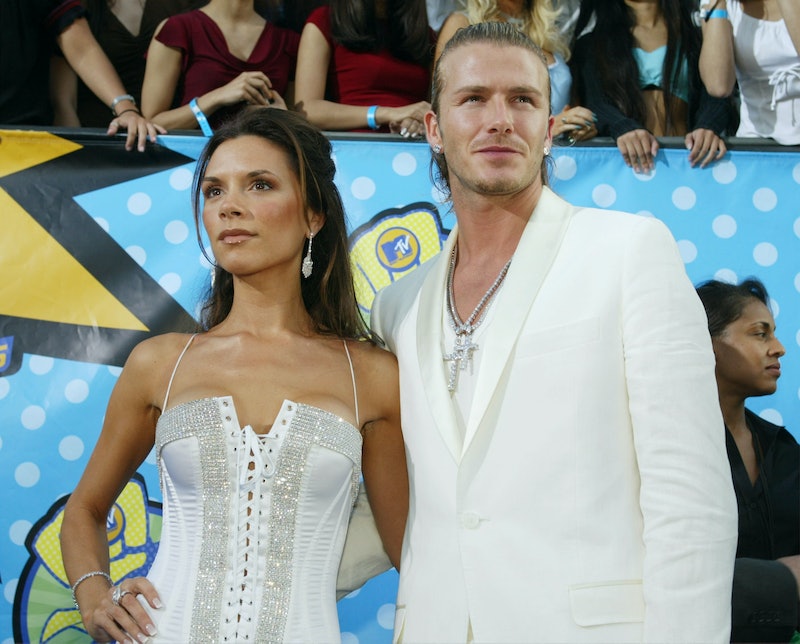 Some celebrities don't have a distinctive look, making dressing up as them for Halloween pretty pointless. But some are totally identifiable. The Beckhams are one A-list couple with an easily recognisable wardrobe. Well, not so much in recent years but in the '90s and early '00s they were known for their outlandish matching ensembles, love of baggy denim (David), massive sunglasses (Victoria) and bling (both). If you're looking for a few David and Victoria Beckham couples costume ideas this Halloween, step right this way.

When the British couple married in 1999, Posh was into anything skintight and Becks alternated between matchy-matchy looks with his wife, questionable tracksuits, even more questionable haircuts, and oversized denim. Even their wedding day outfits will forever be seared into my brain.

Now, the former footballer is firmly suave and sophisticated while the ex-Spice Girl has swapped her ankle-breaking stilettos for trainers and chic trouser-and-shirt combos.

This Halloween, it's the retro looks you'll really want to emulate. Luckily, you don't have to spend a fortune as you can either pick up a readymade costume from a fancy dress store or throw a few high street items together. Whichever route you go down, remember Victoria Beckham never smiles but she has a great sense of humour. That's not too hard to mimic, is it?

If you want people to know who you're dressed up as on Halloween, opt for this look. The football shirt may not be an exact football match, but it’s pretty similar, and much more affordable. Before VB was VB, she was in the Spice Girls which meant a little black dress or a little black dress. Simple.

You may remember this photo from the moment the Beckham’s announced their wedding. I can’t get enough of VB’s combo of a super short dress with a super snuggly coat. Nailed it. For David’s look, simply throw together some baggy jeans and a simple black coat. This LBD from Reformation will become a wardrobe staple, so it’s worth investing in.

Obviously, David and Victoria's wedding ceremony outfits were great but have you seen their evening reception looks? When party time came, the couple whipped off their white ensembles and swapped them for these striking purple outfits by designer Antonio Berardi. Technically, the purple suit is a Joker fancy dress costume but unfortunately David's particular shade of choice went out of fashion almost as soon as 2000 hit, so there aren't many high street alternatives. And yes, the gown is a bridesmaid dress. But it's still a pretty good match.

It's pretty hard to replicate this stand-out Versace leather look without the help of fancy dress retailers. Luckily, Victoria's look is quite similar to a Halloween-appropriate catsuit (yes it’s from Lovehoney, zero shame). As for David? Well, Amazon have provided the ultimate biker duo without having to spend too much ££ on the real stuff.

This is what I think of when I think vintage Beckham. Over the top, glamorous, and not afraid to wear pure white. This particular look was worn to the 2003 MTV Movie Awards (15 years ago, would you believe?) and cemented their status as a power couple. It's easy to find Beckham's white tux but versions of Victoria's corseted dress don't seem to be around anymore. This ASOS version is the closest I could find.

Another classic Beckham red carpet look from the early noughties, this one went down in the history books. This buy from Etsy is a great dupe for Victoria’s corset dress. For David’s look, throw on a loose-fitting white shirt, velvet blazer, and plenty of necklaces.

I hate the word WAG as much as the next woman but it's certainly a phrase that conjures visions of ridiculously big sunglasses, the highest of all high heels, and super skinny jeans. Recreating David's look is simple. Just find some baggy denim from somewhere like Levi's or Topman, chuck on an equally baggy T-shirt, and you're good to go.

Wear one of these looks and you'll be all set for the ultimate throwback Halloween.