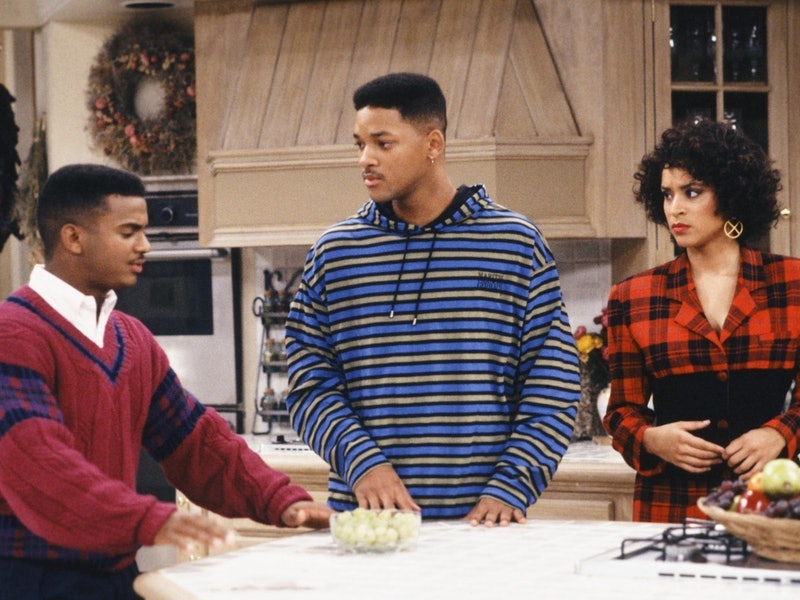 The sitcom went off the air nearly 20 years ago, but with Halloween approaching, there's no better time than to take a crack at a Fresh Prince of Bel-Air Halloween costume and brush up on the lyrics to the theme song.

The show's characters each have such rich and individual styles. You have Will's signature bold printed apparel paired with Zubaz pants and neon snapbacks. Hilary is known for her polished suits and fitted body con dresses. Ashley's style — once she got older — is reminiscent of Janet Jackson during the same era. And Carlton... well, his style stayed pretty true to form with sweater vests and pleated khaki pants all six seasons.

The Fresh Prince cast is so recognizable that searching for '90s Halloween costumes will present you with amazing recreations of Will and Carlton ensembles. And of course, plus size blogger GabiFresh's spot-on Hilary and Will costume from 2012 is still the source of many a Fresh Prince costume inspiration as well.

With the right eye for '90s vintage and the ability to not take yourself too seriously, there are plenty of signature looks from the series that will make you ready to sit on that throne as the prince of Bel Air.

When you search "Fresh Prince Halloween costume" on Google, this seems to be the most common interpretation. Jimmy Fallon even recreated the opening in Feb. 2015 to promote The Tonight Show in Los Angeles. It makes sense when you consider that the opening credits never changed in six years. The look features all of Will's staples, straight down to the Jordan's on his feet.

Hilary Banks is one of the most stylish '90s TV characters. While her endearingly ditzy personality charmed some, it was always her over-the-top outfits that made style lovers come back for more. Think Clueless with more refinement. A '90s-style bowler hat is a must if you are going to recreate this look. When in doubt, add some pearls (or 20).

Nearly 20 years later and Alfonso Ribeiro is still being asked to do the "Carlton Dance." For those who grew up watching Fresh Prince, there was always something lovable about Will's nerdy and pretentious cousin. This is a look that's pretty easy to recreate with the help of regular brick and mortar stores, which is good because you'll need all the time you can get to nail Carlton's signature moves.

While the other characters seemed to never age, Ashley was the one that viewers grew up with. By season five, it was clear that Hilary wasn't the only female Banks with style, and Will wasn't the only one with musical talent (as evidenced by her singing "Make Up Your Mind"). Recreating this pink swimwear look is one last excuse to wear a bikini before winter.

I still don't really understand how Will got away with not wearing the actual uniform at his Bel Air prep school, but nonetheless, he found a way to bring his own unique style to the dress code. It's nearly impossible to find a blazer just like this one, so if you aren't one for DIY, you will probably have to settle for a pattern that's slightly different but still floral.

If there's one thing Hilary knew well, it was shopping. When she wasn't rocking plaid power suits during the day, she was sporting chic body-con dresses. The key to nailing this look is picking a bold color like red and looking for details like cut-outs that add '90s flair.

If there's one beloved Aunt Viv moment for me, it would have to be when she slays this dance and shuts up all the haters. While recreating this look isn't too difficult to do with dance apparel, you'll definitely have to practice the dance in front of the mirror if you want to get it to Aunt Viv levels of flawlessness.

This article was originally published on Oct. 15, 2015