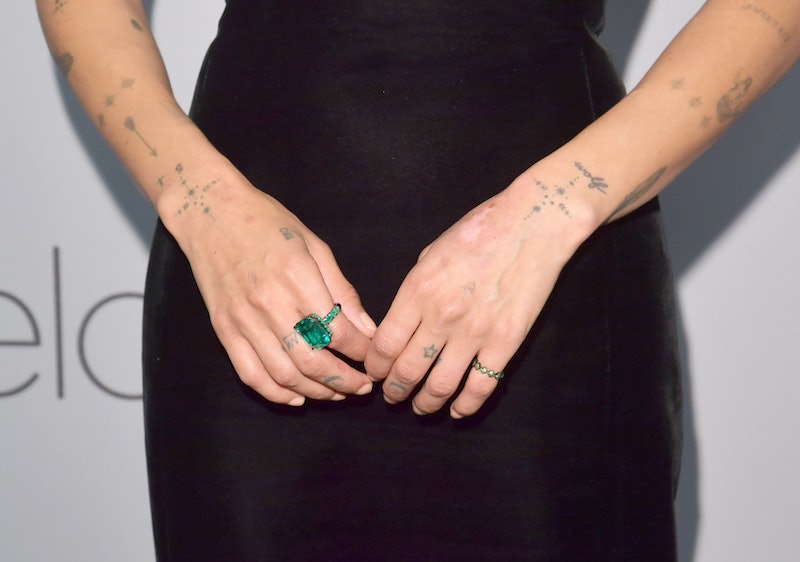 I got my first stick and poke tattoo from a friend on a warm and balmy night in my apartment. My decision to get stick and poke was pretty impulsive, and I invited my friend over to give me one as I was still scrolling through Pinterest and Tumblr for design ideas. I quickly decided on a banner design for my arm, with the word "grrrl" (as in Riot Grrrl) on it. My housemate drew the design, and two hours later I had it tattooed on my arm.

Stick and poke tattoos have been popular in recent years, but became an even bigger trend around the pandemic where TikTok videos went viral and Facebook groups saw a rise in new members. It’s an irresistible combination of DIY arts and instant gratification. It can also make for incredibly personal tattoos, which is why you often see people adorned with tiny tats given to them by friends, or even done on themselves.

In contrast to a tool gun, there’s no electricity used in stick and pokes. It is actually way more straight forward — a needle is dipped into ink and then poked into the skin repeatedly. Because it’s a procedure that can seem daunting these are the seven things you should know about stick and poke tattoos.

1. Stick & Pokes Can Be Safe When Done Right

There are important cautionary tales and horror stories about stick and pokes gone wrong. So if you’re going to get one, it’s important that it’s done right and not in a dimly lit back alley with a dirty pen.

As with needle-gun tattoos, you want to make sure that the area where the ink is going is shaved to avoid infections or ingrown hairs. And because stick and pokes are often done DIY style or by friends, ensuring the sterilization of everything being used is imperative to avoid disease or bacterial infections.

The tools should be clean, the ink should be right, and when in doubt consider a professional stick and poke tattoo artist over your sort-of experienced friend.

2. There Is No Consensus On Stick & Poke Pain

There is no general consensus on whether or not stick and pokes are more painful than needle gun tattoos. It seems to be differ anecdotally and probably has a lot to do with your tattoo placement and your own personal pain threshold. With stick and pokes, your artist is essentially driving into your skin over and over again with a needle. The process can cause stinging, burning, and even swelling.

3. Stick & Pokes Tattoos Take Longer Than A Tattoo With A Needle Gun

Stick and pokes can take longer than tattoos given with a professional's needle gun. With the gun, artists are able to lay down lines quickly and easily. With stick and pokes, the artist literally needs to take the time to create the line with the little dots they're making. Usually the first layer of dots doesn't make for a dark enough line, so the artist has to go over the outline multiple times to fill in the lines. Depending on the speed and skill of the artist, stick and pokes can take as long as a couple of hours, which can get tedious for both the artist and the skin.

4. Stick & Pokes Are As Versatile As “Regular” Tattoos

There is a certain punk aesthetic associated with stick and pokes because of their DIY origins but they are incredibly versatile tattoos. You can opt for classic grungy looking ink or you can have something beautiful and effervescent tattooed onto your body. If you have a good design stenciled on your skin, and a steady-handed artist who knows what they're doing, big and beautiful masterpieces may follow.

Every stick and poke is different. Generally, they tend to heal faster than professional tattoos, and also don't peel as much. Aftercare for tattoos is about the same for stick and poke tattoos: Wash in warm water and antibacterial soap immediately after, ointment for a few days, and unscented lotion for the days to follow until it stops peeling or feeling dry.

Chances are your stick and poke won't grow old with you. They fade faster than professional tattoos, especially on areas that you clean often like your fingers. Even when they’re still totally coherent and visible, you can often notice the fading when comparing them to traditional professional tattoos.

The fact that these tattoos don't last forever could also be seen as a plus, especially if you rethink your decision later. You can test it out before you commit to a long-term purchase. If you’re totally in love with them, you can let them keep fading away. If you grow attached to them, you can either have my friends stick and poke over the lines again, or you could have a professional artist go over it to give it a more permanent home on your body.

Unless you know an artist personally or have your tattoos done by an apprentice, professional tattoos can cost a fortune, with artists charging as much as a few hundred dollars per hour for one design.

Stick and pokes can be ridiculously affordable. The supplies needed for the job are so minimal and cheap, usually just consisting of tattoo ink and a sewing needle (which artists sterilize with a flame). A complete stick and poke kit usually costs less than $100.

For more diligent and conscientious artists, they invest in sterile needles that come in individual packing, which are also super cheap (think $11 for 50 needles). And if you're lucky and have a friend who does them, you may even be able to get them for free.

This article was originally published on May 17, 2015