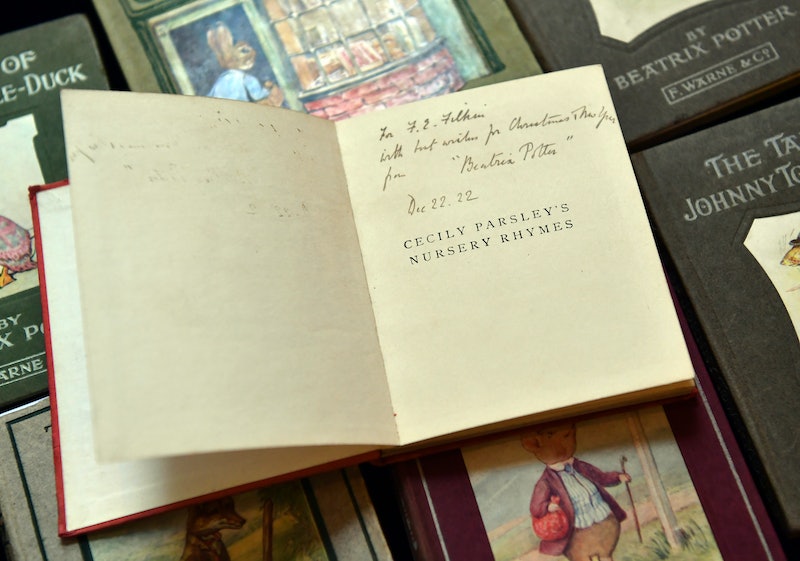 There comes a moment in every kids life where they realize that "Rock-a-bye Baby," which you've probably had sung to you on numerous occasions, is actually a song about a baby plummeting to their death. But that's not the only surprisingly creepy children's song or nursery rhyme. If you look into the origin of the songs we were encouraged to sing as children, it turns out a lot of them are way more disturbing than you ever realized.

Most nursery rhymes have been around for a long time — in fact, in some cases their origins go back hundreds and hundreds of years. They tend to change slightly over time, but the songs typically remain pretty recognizable through the ages. Of course, figuring out where exactly they came from, on the other hand, is sometimes less clear. However, over the years people have come up with lots of possible explanations for different nursery songs. And while some are pretty simple — or just simple nonsense — some possible origins are downright creepy.

It kind of makes you wonder how we wound up letting kids sing all of this stuff. Here are 11 nursery rhymes and children's songs that are way more disturbing than you ever realized.

Three men in a tub,

And who do you think they were?

The butcher, the baker,

They all sailed out to sea,

I remember this song being illustrated in children's books with three men all bathing in one tub, so you might assume that this song is meant to be homoerotic, which would actually be kind of cool. But actually, the original song began "Rub-a-dub-dub/Three maids in a tub" [Emphasis added]. And it was probably meant to imply that either "the butcher, the baker," and the "candlestick maker" were all spying on women bathing or were going to a peep show in town. Which makes you think very differently about the "rub-a-dub-dub" line.

Have you any wool?

One for the master,

One for the dame,

And one for the little boy

Who lives down the lane

There are a few stories about where this song might have come from, including the idea that comes from the Medieval wool trade, but one of them is that it has to do with the Atlantic slave trade. Which is so messed up I can't even handle it.

How does your garden grow?

With silver bells, and cockle shells,

And pretty maids all in a row.

This song might seem like an innocent song about gardening, but there's a good chance it originated as a political metaphor for Mary I of England, the oldest daughter of Henry VIII who ascended to the throne after his death. Mary famously was unable to have a child, so the "How does your garden grow" line is probably a dig at that, and the "quite contrary" name is probably a reference to the way she tried to roll back her father's efforts to make the country Protestant.

The "silver bells and cockle shells" on the other hand are possibly a reference to different torture devices used on people who refused to convert back to Catholicism.

"Ring Around The Rosie"

Ring around the rosie

A pocketful of posies

We all fall down.

This one you may have already heard of: "Ring Around the Rosie" may well have started as song about the Black Death (though there are other theories, too). One of the signs of the disease was supposedly a red rash — or "rosie" — an people would keep herbs — or "posies" — in their pockets to try to ward off sickness. And I think "We all fall down" speaks for itself.

All around the Mulberry Bush,

The monkey chased the weasel.

The monkey stopped to pull up his sock,

The American version of this song seems like some humorous nonsense about monkeys and weasels, but the older, British versions of the song are a little different. In the British versions, there are lines like "A penny for a spool of thread, a penny for a needle" and "Half a pound of tuppenny rice, half a pound of treacle." Which make more sense when you know that "Pop goes the weasel" used to be a slang term for pawning your coat. In that context, the song is actually not about animals chasing each other, but about people living on the edge of poverty having to pawn their winter coat in order to afford basic necessities.

Not nearly as cheerful for the kids.

Not a penny was there in it,

Only ribbon round it.

There are multiple theories about this nursery rhyme, but one of them involves a decidedly not kid-friendly sex scandal. Kitty Fisher was actually the name of one of the most famous courtesans in 18th century London. the story goes that Lucy Locket, on the other hand, was supposedly a barmaid and the two fought over a man — possibly even King Charles II. Not the sort of thing you want your kids singing about.

Gently down the stream.

Life is but a dream.

The lyrics to this song don't have any deep, unknown, disturbing meaning — at least not that anyone's confirmed — but the origins of this song are still pretty creepy. It probably began as part of American minstrel shows. And if those sound familiar, it's probably for their horrific, racist portrayals of Black people — they are also the origins of blackface, and the reason the practice is forever and unavoidably racist.

When I am king, dilly, dilly, You shall be queen

The current lyrics of this rhyme are pretty innocuous, but the older versions are way less wholesome. Not only do they imply that the singer is trying to sleep with their beloved — already kind of weird for unsuspecting kids to be singing — but it's also clear they are trying to pressure this person into sex. Lines like "You must love me, diddle, diddle/cause I love you," and "I heard one say, diddle, diddle/Since I came hither/That you and I, diddle, diddle/Must lie together" are not great.

So while the current lyrics are fine, the origins are still highly disturbing.

"It's Raining, It's Pouring"

He bumped his head on the top of the bed,

And couldn’t get up in the morning.

Much like "Rock-a-bye Baby," this song is actually really dark when you think about it. It's basically about someone getting severe head trauma and possibly dying — and wouldn't you know it, there doesn't seem to be a hidden, deeper meaning to this one. It really is just about head trauma.

"Here We Go Round The Mulberry Bush"

Here we go round the mulberry bush,

On a cold and frosty morning.

The subsequent verses include things like "This is the way we brush our teeth" and "This is the way we put on our clothes," which caused one historian to theorize that the song was about a women's prison at HMP Wakefield. The prison had a mulberry bush in the courtyard, and historian RS Duncan thus suggested that the verses are about the routine the women go through each morning.

Not quite as silly and lighthearted as it seems, I guess.

Your house is on fire and your children are gone,

And her name is Ann,

And she hid under the baking pan.

According to Bustle’s JR Thorpe, “This one dates from at least 1744, according to the British Library, and we still don't know what exactly it's about. Some theories hold that it might be about Catholics being burned at the stake if they were caught saying Mass in anti-Protestant England.” Or, it could also be interpreted as killing a ladybug is bad luck due to children’s superstitions back in the day. Whichever it is, there is a sort of hidden eeriness behind the words.

Jack and Jill went up the hill

To fetch a pail of water.

Jack fell down and broke his crown,

And Jill came tumbling after.

The classic “Jack & Jill” rhyme dates back to 1765 and originated from France. Jack is actually King Louis XVI, and Jill, his Queen, Marie Antoinette. The King, Jack, was beheaded due to his failure to recognize France’s financial problems, hence “Jack fell down, and broke his crown,” and his Queen, Jill, was killed shortly after.

Who knew that nursery rhymes have so much hidden darkness?

This article was originally published on Sep. 17, 2016