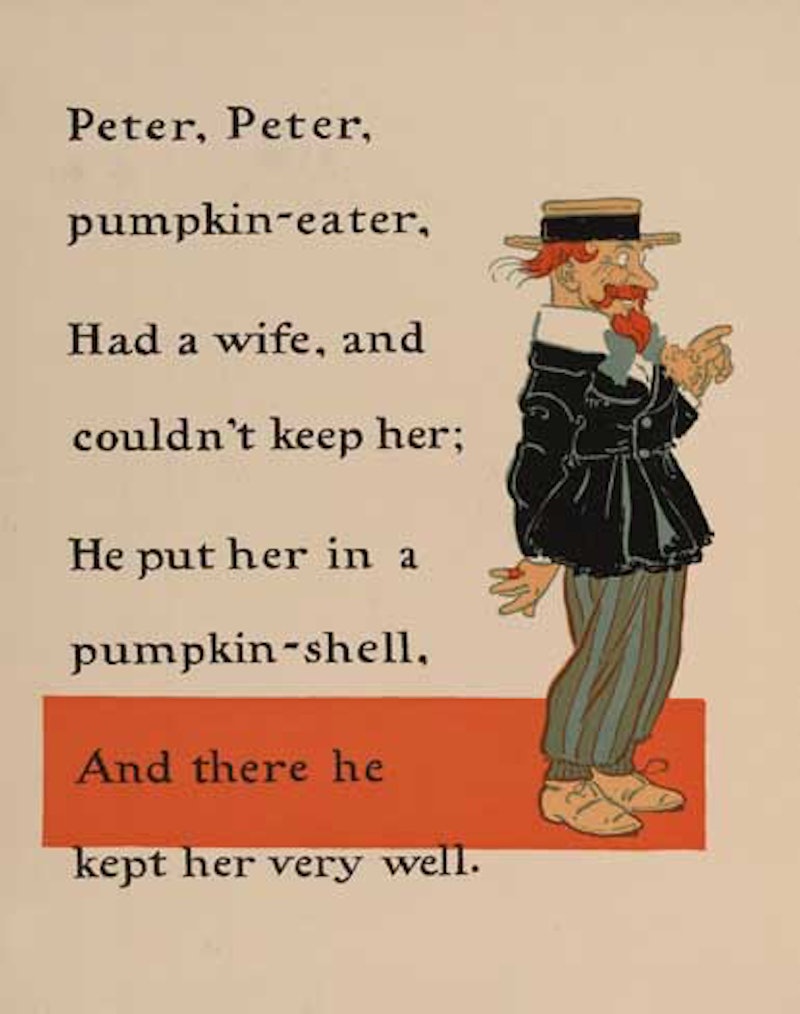 Nursery rhymes help us learn the basics of language during our early childhood years — but now that you've outgrown your diapers, you may have noticed that a lot of nursery rhymes don't make sense to our modern ears. Pop goes the weasel? Since when do weasels pop?! This disconnect can be partially explained by history: many nursery rhymes are hundreds of years old, and so involve outdated turns of phrase. Popping the weasel, for example, was actually 18th century slang for pawning your coat, making that whole weaselly rhyme an irreverent song about selling your jacket in order to afford a night out on the town. Which still isn't exactly a traditional story to tell children.

And the weirdness of traditional nursery rhymes doesn't end there: a few seemingly innocent rhymes actually contain sly references to political events of the day. "Georgie Porgie" (who kissed the girls and made them cry), for instance, isn't about an over-affectionate toddler, but rather George Villiers, a favorite of England's King James I who seduced a lot of women and ran away from their irate husbands. And "Mary, Mary, quite contrary" may be either Mary Queen of Scots or Mary I, known as Bloody Mary — and the silver bells, cockle shells and "pretty maids" were not implements of gardening, but rather torture devices the Catholic queens used for persecuting Protestants. Whoops.

For stories that are a key part of most of our childhoods, nursery rhymes are often blatantly weird once you start thinking about them. Here are 12 of the strangest ones, with their bizarre meanings revealed. Some are just silly, some are violent and inappropriate for kids; but you might want to think twice before reciting any of them the next time you babysit.

1. If You Sneeze On A Monday

What It's Really About: Luck.

Sneezing is an act with a superstitious undercurrent in many cultures. Traditional Flemish belief dictates that a person who sneezes in a conversation will prove that he's telling the truth, according to historians in 1919 — and you may say ‘Bless you’ even if you don’t believe in the devil. Nursery rhymes that aim to "teach" us about superstition aren't all that uncommon, but this one is so out-there that it takes the cake (or the handkerchief.)

Little Jack Jelf Was put on a shelf Because he could not spell "pie"; When his aunt, Mrs. Grace, Saw his sorrowful face, She could not help saying, "Oh, fie!"

What It's Really About: Corporal punishment at school.

Jack Jelf actually got off pretty lightly — in the 17th and 18th centuries, British schoolchildren were often subjected to intense corporal punishment when they couldn't master their lessons. Aside from the famous dunce's cap (named after the Scottish intellectual John Duns Scotus, according to the Stanford Encyclopedia of Philosophy, whose teachings were seen as such nonsense that his name became synonymous with stupidity), boys at schools could be "birched" (hit with birch twigs), hit with a hickory stick, or made to stand outside with placards around their necks. The "shelf", in this case, was the shelf or corner behind the teacher's desk, where poor students could be exiled so that everybody would stare at them for the rest of the day.

3. A Carrion Crow Sat On An Oak

What It's Really About: Omens of bad luck.

Carrion crows are just another name for ordinary crows, and seeing a single crow or magpie was long believed to cause bad luck, per the Oxford Dictionary of Superstitions. This belief that crows portend bad luck is also the foundation of that other odd nursery rhyme, "One for sorrow/Two for mirth/Three for a wedding/And four for death", which teaches the listener what will happen if they encounter various amounts of birds. So the tailor in this rhyme wasn't being bloodthirsty — he was just trying to protect himself from the powerful bad luck that crows were thought to bring with them.

Ladybird, ladybird, fly away home. Your house is on fire and your children are gone, all except one called Anne. For she has crept under the frying pan.

What It's Really About: People being burned at the stake (maybe).

This one dates from at least 1744, according to the British Library, and we still don't know what exactly it's about. Some theories hold that it might be about Catholics being burned at the stake if they were caught saying Mass in anti-Protestant England. It also might just be about how killing a ladybug (a.k.a. a ladybird) was considered to be bad luck. But either way, it's a singularly strange thing to recite when a hapless insect just happens to land on your cardigan.

Tell Tale Tit, Your tongue shall be slit; And all the dogs in the town Shall have a little bit.

What It's Really About: What happens to snitches.

This rhyme is basically a threat. The word "tell-tale", which originated in around the 1540s, is a tattle-tale, — and as this rhyme proves, people who went to the teacher to report on other people's mischief have never been particularly popular on the playground. This was a rhyme sung by children to terrify other children out of tattling. And I reckon that it was effective.

6. Oranges And Lemons Say The Bells Of St. Clement's

"Oranges and lemons," say the Bells of St. Clement's

"You owe me five farthings," say the Bells of St. Martin's

"When will you pay me?" say the Bells of Old Bailey

"When I grow rich," say the Bells of Shoreditch

"When will that be?" say the Bells of Stepney

"I do not know," say the Great Bells of Bow

Here comes a candle to light you to bed,

Here comes a chopper to chop off your head,

What It's Really About: Condemned criminals.

This London-based rhyme (that's where all of those churches are located) is thought by many to be derived from the traditional poem recited to condemned men locked in the Old Bailey jail on the night before their deaths, per the BBC. According to legend, a churchman holding a candle in one hand and tolling a bell with the other would recite a different version of the poem that ended with: "And when St. Sepulchre’s bell in the morning tolls/The lord above have mercy on your souls."

Eeper Weeper, chimney sweeper, Had a wife but couldn't keep her. Had another, didn't love her, Up the chimney he did shove her.

Peter, Peter, pumpkin-eater, Had a wife and couldn't keep her; He put her in a pumpkin shell, And there he kept her very well.

What It's Really About: Murder.

The wife that "couldn't be kept" in this rhyme, which the Oxford Dictionary of Nursery Rhymes notes first appeared in the 1790s, didn't keep running away or anything — rather, she was supposedly a prostitute. Some historians believe that Peter the pumpkin-eater tired of his wife's extra-curricular activities, then murdered her and hid her body in a pumpkin. An even more outrageous interpretation of Peter, Peter, pumpkin-eater’s meaning is that it’s about the 13th century English King John, who famously bricked a rebellious noble's wife into a wall to starve to death.

Have you any wool?

What it’s actually about: Wool taxes.

The BBC reports that this cuddly rhyme is actually about a controversial wool tax that was imposed in the 13th century in England by King Edward I; it divided all the profits of wool sales in three, and gave only a third to the farmer. It was, understandably, wildly unpopular. Black sheep were considered unlucky in general because their wool can’t be dyed, and in Scotland, the birth of a black-faced sheep could portend doom for the entire year.

A pocket full of posies,

We all fall down!

What it’s actually about: The plague — or not.

Since the 19th century, people have said that this nursery rhyme is about the Black Plague, or Black Death — the roses and posies are the ringed rashes and buboes of the bubonic or pneumatic plague, and the falling down represents death. The Library of Congress, though, reports that there’s very little evidence for this, and that it could just be a sweet game where children curtseyed and pretended to hand each other flowers.

Whither shall I wander?

And in my lady’s chamber.

There I met an old man

Who wouldn’t say his prayers,

So I took him by his left leg

And threw him down the stairs.

What it’s actually about: Hidden priests.

The BBC notes that this may actually date from a period in England where Catholicism was outlawed. Catholic priests had to say their Latin masses in secret in private homes, and be concealed in secret chambers or “priest holes” when Protestants came knocking. And they’d risk a lot more than being thrown downstairs if they were caught.

11. Here We Go Round The Mulberry Bush

On a cold and frosty morning!

What it’s actually about: Jogging prisoners.

According to the historian RS Duncan, this rhyme comes from Wakefield Prison in England, where female inmates exercised by jogging around a mulberry bush outside, chanting this as they went. The tree itself lasted until 2019, but the rhyme may have originated in the 19th century.

What It's Really About: Pagan gods or Robin Hood.

This one is so strange that nobody knows quite what to make of it. Some believe it was created in reference to an old pagan god of England, the Holly King, who was symbolically "killed" every winter. Or could it be about the death of the Norse god Balder, god of light and purity, who was shot with an arrow made of mistletoe? Could it be written in honor of the British Prime Minister Robert Walpole, who was also known as Robin? Or Robin Hood? Historians aren't certain — but the image of every bird around (plus, for no apparent reason, a bull) having an elaborate funeral for a murdered bird is a perfect combination of the weird, grotesque and violent imagery that is commonplace in nursery rhymes. Sleep tight, little ones!

This article was originally published on April 3, 2015