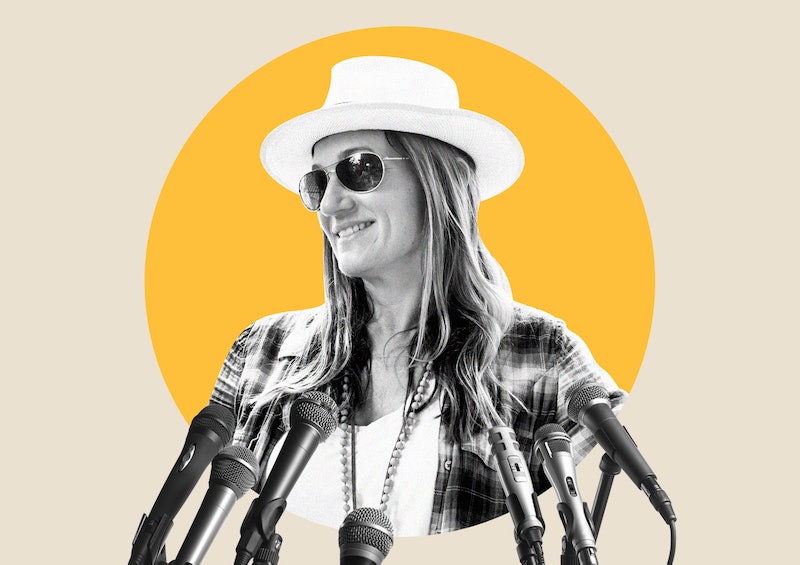 In Bustle's Quick Question, we ask women leaders all about advice — from the best guidance they've ever gotten to what they're still figuring out. Here, Kat Hantas, founder of tequila company 21 Seeds, tells Bustle how she launched a company with her sister and their friend, her favorite way to unwind at the end of the day, and the word she cuts out of her emails.

Tequila wasn’t always Kat Hantas’ go-to drink. “I was a wine drinker,” she tells Bustle. But after finding herself feeling poorly out of the blue, her doctor recommended she switch from wine to blanco tequila, thinking fermented drinks were what was ailing her. Eventually, the doctor-prescribed drink went from her happy hour order to a full-on career.

After eight years of infusing tequila at home, Hantas, along with her sister Nicole Hantas-Emanuel and their friend Sarika Singh, started 21 Seeds, a company specializing in tequila infused with fruits and botanicals. Like Hantas initially, many of her friends had a post-college aversion to tequila. “I just was like, I need to make this smooth, smell amazing, and just taste good,” Hantas says.

Hantas started her career in entertainment, working as a producer in film and TV for 15 years. “My background is truly in storytelling,” Hantas says. “And that’s what I bring to 21 Seeds.” She knew convenience would be key, creating something that would be simple for her and her friends to make into a delicious drink, so she focused on a female demographic and thought through the possible pain points.

“I always say we're a brand that's for her, by her, that can be enjoyed by all,” Hantas says. The company, which launched in 2019, works with a distillery in Mexico that's owned and operated by women, producing tequila infusions from Valencia Orange to Grapefruit Hibiscus to Cucumber Jalapeño.

Below, Hantas shares the career advice that's stuck with her, how she navigates a male-dominated field, and the story behind the company’s name.

I'm curious if there's a story behind the name 21 Seeds.

KH: Everything that goes into 21 Seeds tequila is all-natural and grows from a seed. The “21” is actually “two, one.” We're two sisters and one girlfriend that started the company. It also happens to be the recipe for our signature serve, which is the Seed and Soda — two parts club soda, one part Seeds.

How do you turn your brain off at the end of the day?

How do you pump yourself up when you have a big presentation or a big meeting?

KH: Music. I always think about, "What's the soundtrack that would be playing in this part of the movie?" with everything in my life, whether I'm trying to get pumped up for a presentation or if I need to change my mood. I'll always put on a song to do that. My current go-to pump-up jam is "New Light" by John Mayer.

Women tend to apologize a ton. We almost start off sentences with, "Sorry I wasn't able to do this but," or, "Sorry I couldn't be there," even with emails. That immediately puts us in this position of whatever we're saying, it has to have this excuse or is "less than" from the onset.

Who is your go-to person for advice?

KH: My sister Nicole. She uses a completely different part of her brain than I do. She's so analytical, and I'm really the big dreamer. I'm always thinking about the story we're telling, and I don't like to be drilled down into details and the minutiae, and she's all about that. So, she brings a balance. She gives me a different perspective, which I love.

What would be your career advice to young women, specifically those who are looking to break into a more male-dominated industry?

KH: We as women have a certain way of presenting information potentially. One example of that — and actually this was Nicole's advice to me — is that women tend to apologize a ton. We almost start off sentences with, "Sorry I wasn't able to do this but," or, "Sorry I couldn't be there," even with emails. That immediately puts us in this position of whatever we're saying, it has to have this excuse or is "less than" from the onset. Sometimes I'll look at my email and say, "Did I just start that sentence with 'sorry'? Just cut the 'sorry' out and then start the sentence." It changes the dynamic of the conversation between you and the receiver, as well as the dynamic of how you perceive yourself. I think it's important to understand who you're talking to and the best way to deliver that message so that they actually hear what you're saying.

KH: It's not a typical tequila drink. When Stanley Tucci made that Negroni on Instagram, I felt like it broke the internet. I challenged myself to make a 21 Seeds tequila version of the Negroni. We use two ounces of our Valencia orange-infused tequila. And then we use a half-ounce of sweet vermouth, which is one tablespoon of sweet vermouth and one tablespoon of Campari, and then one tablespoon of orange juice. Mix that all up and pour that over ice. It's literally my favorite drink right now.