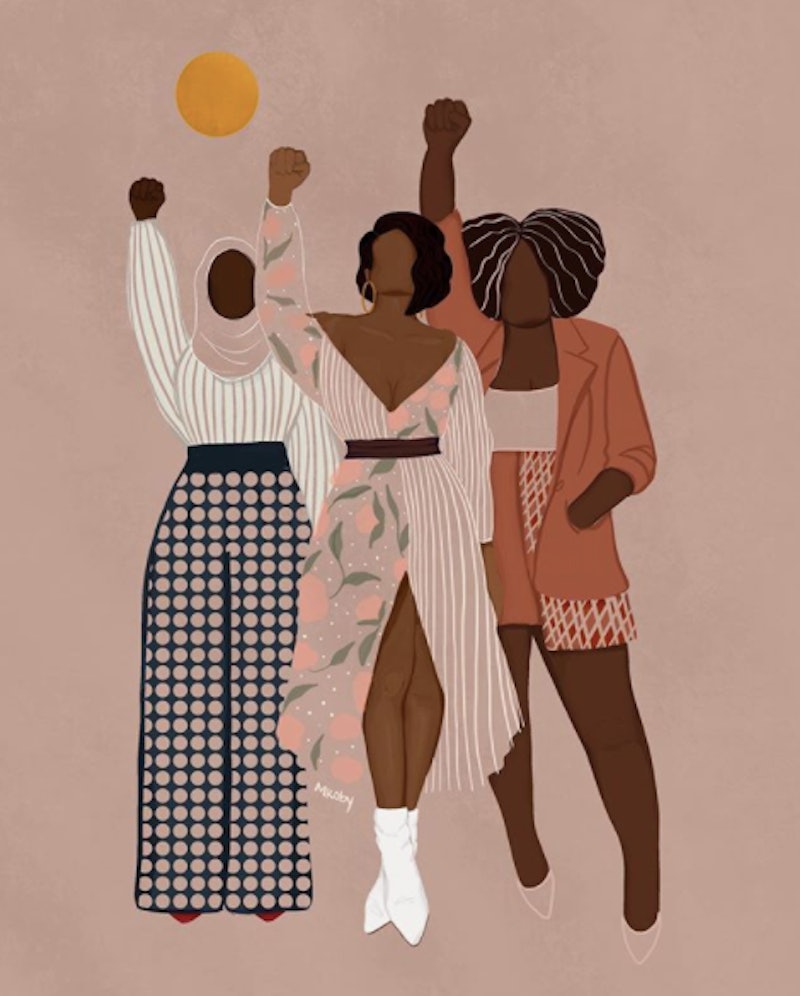 Even in the age of mega influencers and overnight TikTok fame, no one prepares you for waking up to 25,000 new followers, strangers flooding your inbox, or Reese Witherspoon sharing your post with 23.1 million people. But for artists Dom Roberts, Danielle Coke, and Melissa Koby, who's social-justice art went viral on Instagram amid protests against police brutality and systemic racism, this is their new reality.

They didn't create expect their work to resonate with so many people. But now, they each have a following who's been touched by their work — and the pressure to create more.

Below, the artists share what it's like to have their art make an impact amid a social-justice movement.

A few weeks ago I had a normal Instagram, a couple of graphics — just personal stuff I messed around with. I barely had 1,000 followers. When Ahmaud Arbery was killed, I made an infographic about the 2.3 miles for his birthday. Ever since then, I've wanted to provide resources.

When George Floyd was killed, I was going to make a graphic saying, "His name was George Floyd and he couldn't breathe" with a swipe-through to call the mayor and D.A. When I started it, I realized it wouldn't be enough. I already knew so many people in my circle that looked away when Black deaths happened. So my next big post came from a place of frustration and anger: "Don't ignore something because it makes you uncomfortable."

I think that was a gut check. A lot of my white followers said, "Wow, that called me out. I have to pay attention to what's happening in our world right now."

That's the switch that's taking place. When the Ferguson protests and the deaths of Eric Garner, Tamir Rice, and Trayvon Martin happened, this wasn't the conversation on social media. But people are listening now.

Reese Witherspoon shared it — tagging me — and it spread like wildfire. Her repost resonated with me because she mentioned talking to her children about racism. I made a post recently on having the conversation about racism with the people around us — our kids and families. Because if you're not having the conversation with them, someone else is, and you need to make sure that they understand the truth. Racism isn't what it was in the 1960s. And it's definitely not what it was when slavery was happening. We need to have an updated conversation about what racism is in America today.

When I first made that graphic, I thought it'd get a couple of shares. But now that it's gone viral, I've been posting around the clock, every day. I gained pretty much 25,000 followers overnight of people who are listening to me. I feel like I can't stop. There have been points where it's overwhelming because I'm speaking for so many Black people who don't have words right now but feel the exact same way I do.

There's a lot of Black people that don't want to have the conversation, and it's not their job to teach white people. But I want to be that Black person that can speak on these topics. It's rooted in love for me, never to belittle or argue, but just to share and educate.

Stay tuned for merchandise based on Dom's graphics, with all proceeds going to anti-racism organizations. Follow @domrobxrts.

I've always known there was a problem with Black art and Black words being taken without credit by white influencers. It wasn't until my art went viral that I started to experience it for myself. I speak for a lot of different artists when I say, "This is how we make a living. While we want people to share our work, we also need credit simply because we were the ones that created it." A lot of what I do involves taking complex concepts and making them easier to understand. That takes a lot of mental labor. The reason I pinpointed it in the white community is because, given the issue at hand, how we're fighting for Black lives right now, it's imperative that we are amplifying the voices of Black people who might not otherwise be heard.

My illustration, "Exercising while black should not be a death sentence," was about Ahmaud Arbery and it was the first one to go more viral than I've ever seen since I started sharing my art in January. I think it reached about 2 million people. I did it quickly. I felt the story deserved attention and there needed to be change. I was absolutely shocked by the amount of people who resonated with it. People who had never spoken out finally felt like they had the ability to do so because of the illustration.

The majority of comments were positive, which was really refreshing and unexpected. I ended up limiting my comments after a while though, because whenever something goes viral, people who want to attack you come out of the woodwork. Due to the subject matter, and the fact that I'm still figuring out my own grieving process I had to chose between putting my whole heart into educating people or using my energy into fighting trolls. I chose the former and decided to focus on people who wanted to learn more with an open heart.

Even though I have more messages than I can keep track of, it's so cool that whenever I open one, it'll be the most thoughtful message or people who said my work changed their mind. For all of the feelings of overwhelm and anxiety that come with this, at the same time, there's a lot of thankfulness. I definitely have to take time away. I'm trying to figure out the balance. I'm still completely new to it all, but I have a lot of gratitude.

I'm introverted to the point where I didn't even really want to be on Instagram. But since COVID happened, I needed an outlet to express myself. So, I started relying on my iPad for my artwork. I started a quarantine series in March where I just draw how I feel and put myself in my ideal scenarios. All the women are beautifully dressed and they're having a good time, even though they're stuck inside. It was the only way I was dealing with being in quarantine.

We're just now tuned into racism. My emotions are just super heightened and the only way I can get them out is to draw. I'll always represent women, and from my viewpoint, it's women taking a stance and being positive against racism.

Last week, I protested and saw a bunch of people in solidarity, standing up for what they genuinely believe is horrible and wrong. And I felt empowered by that. I drew three women and put them in beautiful dresses because this is a new revolution, and it doesn't look like it did before the civil rights movement. People look and feel differently, so I wanted to make sure that they were represented differently. I want to make sure that the women I'm drawing look as strong as women want to feel.

I haven't even read all of the comments yet. I'm just digesting the impact that this one image had — it reached over 421,000 people and I gained 13,350 new followers from it. A friend of mine texted me, "I looked at your post and I cried. I've been feeling so many things and I've been feeling so helpless, but something about this image makes me feel strong." I can't wrap my mind around somebody feeling that strongly about my work.

Sometimes I don't know how to express myself. And I'm blown away by the fact that the things that I'm drawing are actually translating to people the way I want it to. It gives people another outlet because not everyone has the words. So if this is a way for them to represent themselves and I'm able to give that to them, that's powerful. That's impactful.

More like this
Kris Jenner’s Advice For Kim Kardashian Is Going Viral On TikTok
By Courtney Young
The Viral TikTok “30,000” Sound Fits Nearly Every Scenario
By Courtney Young
TikToker Kate Glavan Has The Antidote To The “Hot Girl Walk”
By Alexis Morillo
What Is “Night Luxe?” Breaking Down TikTok’s New Aesthetic
By Courtney Young
Get Even More From Bustle — Sign Up For The Newsletter