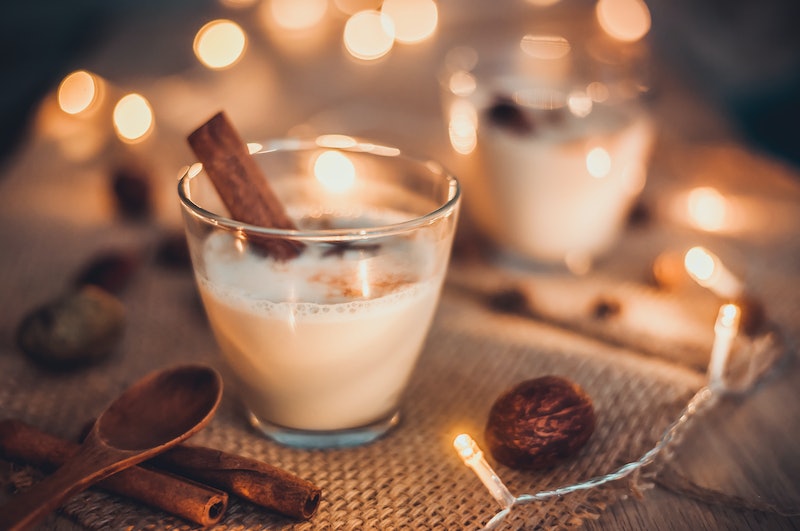 The holidays may be a ways away, but that doesn’t mean you can’t prepare for them now — considering they can be quite stressful. To ease a bit of that holiday-induced stress, you’re going to want to have a festive drink with you at all times. And it doesn’t get more festive than delicious spiked eggnog. As end-of-year chaos combines with holiday madness, a rich and creamy cup of eggnog has just the support we all need. It's also the perfect conversation distraction. What will you say when your aunt asks you about your love life over dinner? Deflect and ask if she needs a good eggnog recipe, obviously. How will you respond when your parents question your career? Tell them eggnog is your job now.

It's no secret or surprise that eggnog and alcohol go together like milk and cookies, but which pairing is the best? Eggnog is already a fairly contentious holiday drink — you either love it or you hate it, and if you do love it, you don’t want one bad alcohol experience ruining it for you forever. So to prevent you from that fate, I graciously volunteered myself a la Katniss Everdeen to take the plunge and sample them all.

To make sure that these alcohol pairings were actual crowd-pleasers and not just my personal preference, I enlisted the help of two professional mixologists, Camille Wilson and Julianna McIntosh, to help with my taste test. Fine, I’ll admit it, I’m not as versed in the cocktail-mixing world as I’d like to think, so I’ll leave it up to the experts to give the final word.

And after drinking glass after glass of dairy, here are the results.

For my first pairing, I decided to add a splash of peppermint schnapps to my 'nog. If you think this would be the ultimate holiday drink, you would be correct. Oh my god, I loved it. I wanted to drink 15 more, but I had the rest of this taste test to get through.

Holiday spirit-ness: 9/10. Peppermint and eggnog — it’s Christmas in a cup!

Crowd-pleaser: Yes, my two guests were totally on board with this drink.

Wilson: I’m not big on peppermint flavors, especially in a creamier drink. So this doesn't sound great to me. Schnapps tend to be pretty sweet. I might try a cream liqueur instead, like Bailey's Irish Cream.

McIntosh: Eggnog and peppermint is like that peppermint-Christmas-cookie, nutmeg-spice fantastic combination. I love it.

This rum altered the consistency of the eggnog, so I was hesitant to try it, but the flavor was actually great. Whatever spices are in the rum paired well with this eggnog.

Holiday spirit-ness: 5/10. Besides the eggnog, nothing about this drink is especially holiday-esque.

Crowd-pleaser: We only had enough for my drink, so my crowd was definitely not pleased.

Wilson: This sounds incredible! I'm a huge fan of spiced rum and Kraken is a great brand. I've tried eggnog with white rum, and I think that this combination sounds great. Bacardi white rum could also work.

McIntosh: Rum is one of my favorite spirits right now, and I think spiced rum is huge when it comes to the holidays. Spiced rum has those holiday-esque notes and those nutmeg flavors. So, all those spices coming together helps to enhance the eggnog.

This smells exactly like a margarita, but it is most definitely not a margarita. I immediately gagged after sipping this.

Crowd-pleaser: No one was on board with this one, which I guess is understandable. It's basically a summer margarita but with dairy — yuck.

Overall: 2/10. I gave this two points in case there are people who actually like to drink margaritas on Christmas, you weirdos.

Wilson: I'm not sure I would be excited to try this... I might try an aged tequila instead, like a reposado.

McIntosh: The tequila is a hard train for me to get on. I love tequila, don't get me wrong. In other combinations, you're using the peppermint schnapps that has a great spiced flavor with the peppermint or you're using spiced rum that has those holiday spices, but I'm not sure how I would feel about tequila with dairy. With the right combinations, it could taste really good. If you're using a sherry or an addition of something to go with the tequila, it would bind it better flavor-wise.

I thought this one might be good, since I was drinking Southern Comfort (non-alcoholic) eggnog. I was wrong. Whiskey is for elderly writers, not for me.

Crowd-pleaser: We were split on this drink. I hated it, and my guests thought it was just OK.

Wilson: This sounds like a great combo. Evan Williams is a great bourbon and it's super affordable. I’ve tried this combo before and it’s great — eggnog is my favorite way to spike bourbon!

McIntosh: When I drink bourbon, I prefer it to be warmed. Evan Williams is not personally my favorite, just because there's so many different bourbons out there. However, it’s great for people who aren't so much of a bourbon drinker and want a well-known, common, middle ground.

This is almost the same as above but in a prettier bottle. It was slightly better than Evan Williams but not by much.

Crowd-pleaser: We all thought this one was just meh.

Wilson: This sounds delicious! Similar to bourbon, whiskey is my go-to for eggnog.

McIntosh: Whiskey is not my favorite, and I don't think that the flavors are sweet enough for me; therefore, I wouldn't use a rye in my eggnog. However, I think it depends on who you are, and how much you love whiskey.

I like apples, and I like people named Jack, so it's no surprise that I like Applejack. That's how it works, right? It paired pretty nicely with eggnog. It probably would be better as a fall drink, though. A nice mulled cider, perhaps?

Crowd-pleaser: We all agreed it would have been nice to have this around back in October.

Wilson: I'm intrigued — but I'm not sure how well the apple flavor works with eggnog.

This one kind of tasted like a hangover waiting to happen.

Crowd-pleaser: My crowd thought this one was just not good. I think I spiked it a little too much.

McIntosh: I think if you're a bourbon drinker, and you put a little on the bottom of your cup and you add in warm eggnog to really get it moving and fresh, nutmeg on the top, it could be really good. But if you don't love bourbon, this probably wouldn't be your favorite choice.

I was really hoping this one would be the greatest, if only because I have all of this apple pie moonshine and no use for it. But the results were similar to that of the Applejack. It would make a better fall drink. I guess I'll just have to keep it around until next year.

Holiday spirit-ness: 6/10. This was definitely seasonal... we're just in the wrong season.

Crowd-pleaser: We were split on this drink. I didn't like it, and my guests thought it was just OK.

Wilson: This combo reminds me of the one with Applejack. I love apple pie and apple pie-flavored treats. But I'm not sure how the flavor would work with the creamy texture of the eggnog. I might add some cinnamon to give it more spice and complement the apple flavor a bit.

McIntosh: So, again with the apple flavor. It’s an interesting addition. I don't know if this would necessarily be my drink of choice, but with moonshine, I've actually had a great experience with some brands out there.

It's the hap-happiest season of all (when you have this drink in tow)!

If you are going to spike your eggnog, go all the way with peppermint schnapps. It's the ultimate holiday drink.

This article was originally published on Dec. 22, 2014