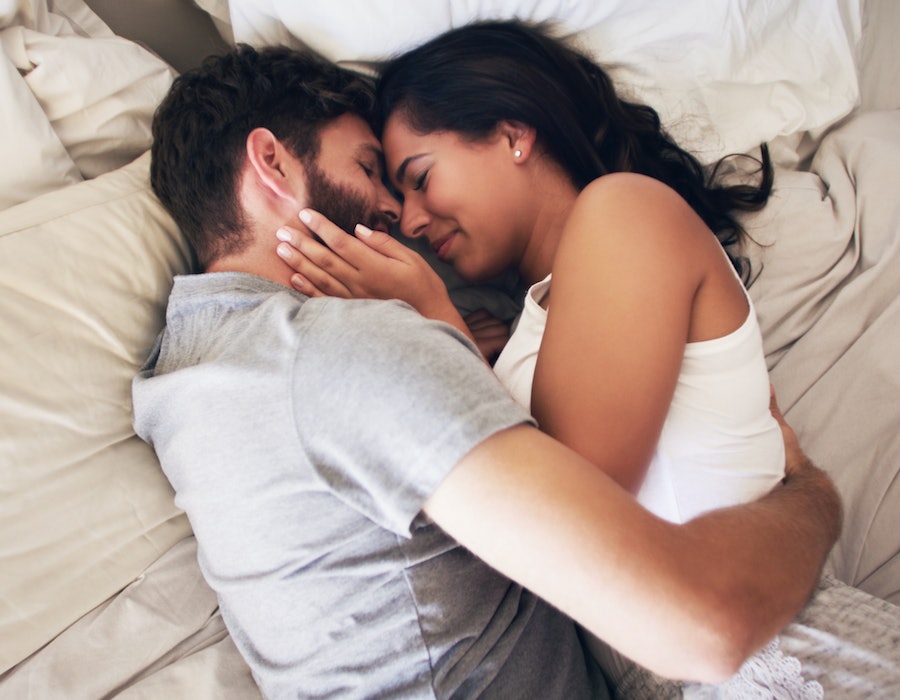 Turns out, all that stuff you learned in middle school about how all guys are hump-crazed sex lunatics might have been slightly off. Unsurprisingly, that perspective is pretty unfair to men and the people who want to have sex with them. That narrow view of masculinity — a classic of pretty much every teen movie you watched growing up — hurts anyone with a penis who might be having trouble getting or maintaining an erection. And unlearning it might just be the first step to getting your potential sack-pal back on the right track.

"Men tend to think that their bodies are almost mechanical," sex therapist and educator Lisa Hochberger, LMSW, MEd, tells Bustle. "But sex is so much more complicated than that."

As it turns out, there are actually tons of things that can keep people from getting an erection that have nothing to do with you. Harvard Health reports that up to 30 million American men experience recurring erection difficulties, and almost all men have, at one time or another, had their top ramen refuse to boil. And while erectile issues are often seen as an older man's problem, one 2017 study cited previous research that around 8% of men aged 20-29 had experienced erectile dysfunction; for men 30-39, that number went up to 11%.

So not only are erectile problems common, they're nothing for you or your special friend to be freaked out about. Check out nine common reasons that dudes sometimes can't get it up, and get ready to become the soothing voice of reason the next time the guy you're with has a hard time pitching his tent in your happy valley. Everything (and every penis) is gonna be fine!

Ah, booze: you give us the self-confidence to talk to potential sexual partners with one hand, and take away boners with the other. While chronic heavy drinking can lead to chronic erectile dysfunction, according to one 2007 study, even one night of hitting the sauce too hard can make it difficult to maintain or achieve an erection.

Solution: Luckily, alcohol-induced softness is a totally temporary condition, one that should clear up as soon as your pal can once again walk a straight line and recite the alphabet backwards. If this potential partner has consistent erectile problems from drinking too much on an ongoing basis, however, you might want to talk to them about their alcohol use, or suggest they reach out to a doctor or counselor.

You may already know that lots of hard drugs can cause sexual problems, but even pot can inhibit erections. (And you thought weed was just a harmless way to enjoy the musical stylings of Pink Floyd). While VICE reports that the devil's lettuce can be a way to lower inhibitions or anxiety around sex, too much of it can cause the imbiber to potentially lose interest in getting down.

Solution: There's only one fix here, alas — sober up (and if this partner now has to admit that The Wall is unbearable to listen to while sober, well, that's just the price they'll have to pay).

Being chronically overtired or burnt out impacts everything, including your sex drive and your ability to become aroused. People grappling with insomnia, or dealing with punishing work or school schedules that leave them barely any time to sleep, may not have the energy to get down and dirty.

Solution: Frustratingly enough, the only solution to exhaustion-based impotence is to get some rest, which is obviously difficult (or you wouldn't be having this problem in the first place). But if your partner has been resistant to getting help for insomnia or asking for different hours at work, the inability to get that nine iron out on the putting green might be the thing that finally motivates them to make a life change. So, at least there's that.

Just as certain meds can make it difficult to have an orgasm, some can keep the flagpole from even getting raised in the first place. Anti-depressants like Prozac and Zoloft, anti-anxiety pills like Valium, high blood pressure medicine like Diuril, and even over-the-counter cold medicines like Sudafed and anti-heartburn pills like Zantac can inhibit erections, according to the U.S. National Library of Medicine.

Solution: Obviously, no one should ever go off a prescribed med without consulting with a doctor. But there are erection-friendly alternatives to nearly every daisy-wilting medicine listed above. Embarrassment shouldn't keep penis-havers from talking to their GP about this: Doctors are well aware that erectile difficulties are a possible side effect for all of these medicines, they just don't know which patients will experience what side effects — so they're waiting for the patient to bring it up.

Not to give your already stressed-out bb one more thing to worry about, but stress is behind many erectile problems, from one-off boner blunders to a lingering inability to get and maintain an erection. Of course, sex difficulties are just the tip (ahem) of the stress-induced health problem iceberg — sustained stress can also lead to insomnia, stomach troubles, chest pains, anxiety, and more severe health issues in the long term.

Solution: Again, saying "stop being so stressed out" is easier said than done — but a lot of people find sexual dysfunction to be a stronger motivator to live a less-stressful lifestyle than the threat of, say, a heart attack down the road. There's a chance that this could actually be a good thing in the long run for your boo, if it helps them take their stress seriously. Relaxation techniques like yoga, exercise, meditation, tai chi, and getting adequate sleep can all lessen the impact of stress on your body.

Remember those cultural messages we discussed earlier, about how men are wild sex aliens? Well, people with penises are raised hearing those messages, too, and they can end up screwing with their sexual self-image — for instance, they can lead men to obsess over their own virility, and panic about impressing a new partner, until they've thought their boner into a corner and can't get an erection. Performance anxiety is one of the most common culprits behind lost erections.

Solution: The best thing you can do here is be understanding. By not freaking out yourself, or asking questions like "Is it something I did?" or "Do you not find me sexy any more?", you can help create a relaxed atmosphere where your partner can eventually see that there is nothing to worry about.

Smoking damages blood vessels, inhibiting blood flow throughout the body ... and I mean throughout the body. In one 2011 study of a group of 65 smokers with erectile problems, the people in the study who quit "had wider, firmer erections and reached maximum sexual arousal (but, importantly, not climax!) much more quickly," TIME reported. Quitting smoking has pretty consistent benefits to your health, and it stands to reason that better sex follows quitting smoking, too.

Solution: Show this article to your nicotine-loving lover. If all that cancer stuff hasn't made an impact, maybe the promise of better erections will. (I've always thought that warning labels that just said "THIS WILL KEEP YOU FROM GETTING A BONER" would probably end almost all cigarette sales within, like, a decade.)

Remember what I said before about how it's not you? It isn't that your not sexy, you perfect human you, but for some people, relationship problems (like fighting all the time, or having clashing expectations about where things are going) can severely mess up your sex drive and ability to become aroused. This happens regardless of the configuration of your relationship. Which makes sense — if you're spending 90% of your time together fighting about whether you're going to move in together, switching gears to make 10% of your time together into a sexy sex party is pretty dang difficult.

Of course, sometimes having a hard time getting hard can be indicative of a much more serious health problem. Some studies have found that erectile problems in young people are one of the first indicators of developing heart disease; erectile difficulties have also been tied to diabetes, thyroid problems, and other health concerns.

Solution: The good news is, almost all of these conditions can be successfully treated if you catch them early on. And since erectile problems may be the first side effect your boo has experienced, seeking medical treatment for erectile problems may be the thing to get them into a doctor's office. If your person is a well-rested, non-drinking, non-smoking, paragon of relaxation who suddenly can't get wood, urge them to talk to their doctor — a misbehaving penis may actually be communicating something way more important than "Not tonight, honey."

If your partner sees a doctor and determines they're in the clear, health-wise, the next step is going to be as gentle and kind as possible as they figure out what's happening with their down-under. "Supporting them and being really understanding about how their body responded" is the best way to react in the moment, says Hochberger, to "calm their nerves" and reduce any feelings of shame or anxiety that might follow. She also suggests mindfulness-based techniques to help "keep their mind straight" the next time you endeavor to do it. As with any relationship (or dating!) issue, empathy really is the best policy.

This article was originally published on Feb. 10, 2015