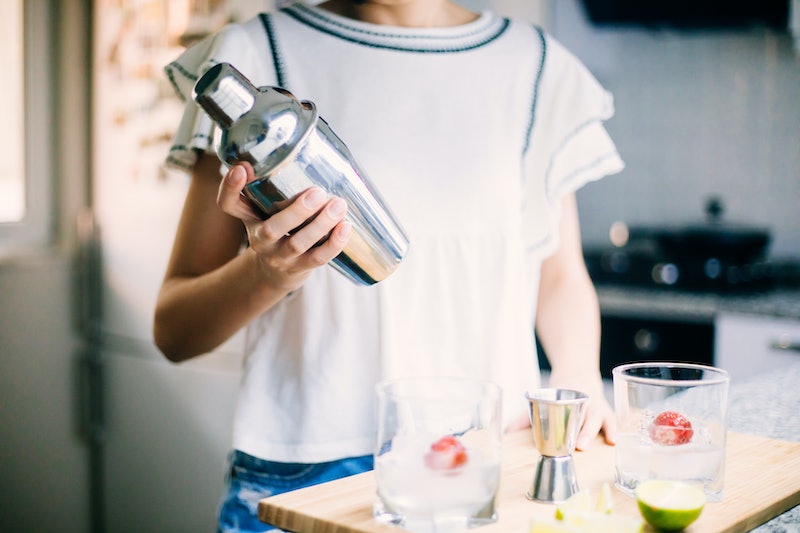 No matter how long you've been drinking as an adult, everyone has some lingering questions about alcohol. Is tequila actually an upper instead of a downer? No. Will I really never get sick as long as I stick to one color of liquor? Again, no. Does alcohol go bad? Actually, yes. Contrary to popular belief, booze does go bad, so you don't have forever to finish off that bottle of sherry you inexplicably have stashed away in the back of your bar cart.

It seems almost counterintuitive that alcohol should go bad, especially since the older an alcohol gets, the more expensive it tends to be. I mean, you even compare things to “fine wines” if they get better with age. When people say that alcohol doesn't go bad, what they mean to say is that it won't make you sick (I mean, at least not for bacterial reasons). Microbes can't survive in ethanol, which is why you put rubbing alcohol on cuts that you don't want to get infected. But alcohol can go bad, in that it can start to taste like the devil.

The shelf life of your alcohol depends on the type of alcohol it is. Your bottle of two-buck chuck, six-pack of craft beer, and handle of rum have all been produced differently. Thus, they’re going to react differently to things like light, temperature, and exposure to oxygen.

Not sure how long your favorite booze will last? Here’s a handy guide:

The shelf life of beer is going to be on the shorter side, as dietitian Lisa Wartenberg explained in Healthline. Most beer will have a “best by” date printed on the can. However, you don’t need to worry about finishing it by then. That date is more a recommendation of optimal use than a warning that you’ll get sick if you drink it a day too late. You’ll want to drink your beer within the three months of that date.

However, if your sealed beer is exposed to heat, it could skunk. (You’ll know if it’s skunked because, as the word suggests, it smells sour and earthy. Like a skunk.) Most beer is sensitive to light and temperature. So, if you buy your beer chilled, you’ll want to make sure you store it in your fridge when you get home. If you buy it at room temp, you’re fine to let it sit a bit before you put it in the fridge. It’s the variation in temperature that’ll make your beer go back quickly.

This one is more about taste than anything. If your bottle of wine is opened, you’ll definitely know when your wine goes bad because it will start to taste like vinegar. Some older wines last one to two days once they’re opened, while younger wines can last up to two weeks in the fridge. Regardless, recorking and refrigerating opened wine is key to keeping it good for longer. If you’re talked about a sealed bottle, most wine will last up to 10 years if it’s stored on its side (to help the cork from shrinking or developing holes) in a cool dark place.

Drinking something bubbly? You’re going to want to drink it once it’s opened. Champagne and other sparkling wine, like carbonated drinks, will lose their bubbly goodness within 24 hours. If the bottle is unopened, however, your champagne will last a solid decade provided it’s stored somewhere dark and cool.

You might think your favorite hard seltzer — your White Claw, your Truly, your Bon & Viv — is just like the soda you keep in the fridge for years at a time: you can safely crack it open whenever you please. But hard seltzer is just like other booze, in that it gets its alcohol from fermented cane sugar, and in that it can go bad. “As with any brewed beverage, there is a freshness window,” columnist Adam Teeter wrote for VinePair. “If you drink outside that window, the seltzer will not taste as good.” He suggests tossing any hard seltzer left over from last summer and buying a new case. White Claw’s FAQ page backs that up, saying the seltzer is good for up to a year.

The worst thing about vodka, arguably, is that it tastes like burning rather than anything discernible. However, that's also what makes it a highly stable alcohol that will keep almost indefinitely. An unopened bottle should actually stay the same, flavor-wise, for many years. Once you open it, however, it will start to evaporate. Many companies, like Absolut, will recommend consuming vodka within two years of purchasing it.

Like vodka, whiskey has an almost indefinite shelf life if you leave it unopened and store it in a cool, dark place, but once you open it, the rules of the game change. In order to best protect the flavor profile from oxidation, if you half a bottle or less left you should drink it within a year, and if you have less than a quarter of a bottle you have about three to four months before it gets questionable.

Tequila degrades quickly (as does your sorority sister when she drinks it) when it’s opened, so you’re going to want to drink it in the first two months after you crack it open to avoid oxidation and evaporation.

Think of rum like whiskey in terms of oxidation. In a cool, dark place, you can keep it almost forever, but once you open it, it'll start degrading in about three months.

Remember how much Bailey’s you drank the first time you tried it because someone said it tastes like “spicy chocolate milk”? It probably would have been good to know whether that bottle had been opened in the last year. Bailey’s and other cream-based liqueurs should be thrown out 18 months after they’ve been opened, for safety reasons (microbes like cream just like you do).

Bourbon is so high in alcohol that it's even more stable than whiskey or scotch (the alcohols to which it is most frequently compared). Even opened, bourbon can taste pretty much the same after 10 years if you keep it out of the sunlight.

As a rule of thumb, take a sniff of whatever bottle you accidentally aged. Does it smell off? Probably best not to drink it. While most alcohol doesn't stay good forever, you still have plenty of time to enjoy it.

More like this
TikTok's Butter Board Might Be The New Cheese Plate
By Emma Carey
10 Pumpkin Recipes That Are Way More Creative Than Pie & Lattes
By Rebecca Deczynski and Alexis Morillo
On TikTok, Tinned Fish Date Night Is The Latest Viral Food Obsession
By Emma Carey
Deliveroo Is Selling Lotus Biscoff Cinnabons Now
By Darshita Goyal
Get Even More From Bustle — Sign Up For The Newsletter

This article was originally published on July 24, 2015