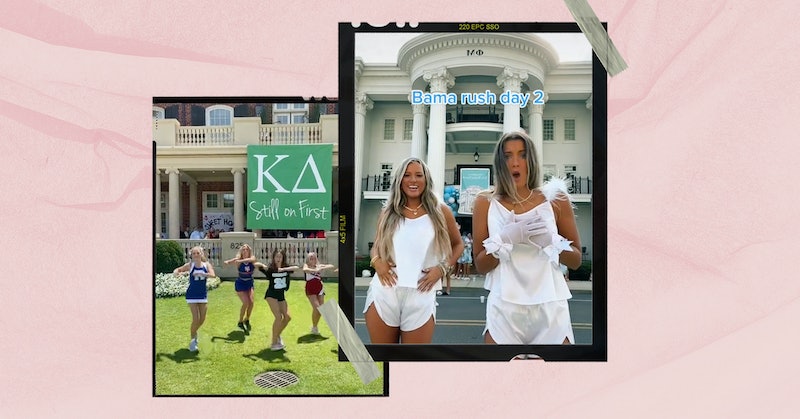 It’s that time of year again, folks: Alabama Rush Week is back. More specifically, the #BamaRush hashtag is back in use on TikTok, flooded with incoming freshmen sharing their daily outfits for sorority recruitment at the University of Alabama. Get ready for an influx of bright colors, Kendra Scott earrings, and girls talking about things like “philanthropy round” and “pref day.” If your Amazon cart is filled with gold jewelry and headbands by the end of the week, we all know the reason.

For the uninitiated, let me explain. #BamaRush was arguably the viral sensation of last summer, taking over TikTok for a brief but glorious week in August 2021. Simple videos of women sharing their OOTDs became an object of cultural fascination so ubiquitous, I had non-American friends texting me to ask how sororities work. “Could the girls really get dropped from all their houses? What happens if Ashley gets Phi Mu and her roommate Kaylin goes Zeta?”

As someone who spent years of my life entrenched in sorority culture — first as president of my college chapter and then as a full-time consultant for my national organization — I felt like telling everyone, “Hi, welcome to the club, it’s actually really fascinating here!” Suddenly this very niche community was being talked about by a huge portion of the internet.

#RushTok spawned countless parody videos, hot takes, and discussion about the very American phenomenon of Greek life. The #BamaRush hashtag has 1.1 billion views on TikTok, and iterations like #RushTok (which encompasses other schools) have view counts in the hundreds of millions. There’s no way around it: People are obsessed.

What Is #BamaRush On TikTok?

For those blissfully unaware of terms like “work week,” “PNM,” “preference round,” and “bid day,” there’s a lot to learn. Alabama Rush is the informal term for primary recruitment at the University of Alabama, aka the annual process of selecting new members for the 19 National Panhellenic Conference (NPC) sororities at the school. Over the course of nine days, potential new members (PNMs) go to “rounds” at each sorority house, meeting current members, talking about themselves, and ranking their favorite houses at the end of each day. The sorority members also select the women they want to invite back after each round. This mutual selection process culminates in bid day, when lucky PNMs receive a “bid,” or official invitation to join a chapter.

Even if sororities aren’t your thing IRL, there’s something compelling about watching people go through recruitment via TikTok. It’s like a reality show that plays out live over the course of a week — but it’s easy to forget the long days, heightened emotions, and stress these young women go through, especially with the newfound eyes of the world on them due to #BamaRush’s popularity on TikTok since 2021. Rush is notoriously grueling, especially at a school like Alabama with such a massive Greek system. A 2016 study in Oracle found that sorority recruitment contributed to significant short-term increases in anxiety for participants, regardless of whether they ultimately got a bid. Simply put, there’s a lot of pressure, whether you can see it through TikTok or not.

Is #RushTok Different This Year?

The short answer is yes, and that’s because it has the added expectation of TikTok popularity. Last year’s #RushTok blew up unexpectedly, catapulting PNMs into the spotlight who might never have expected their videos to garner hundreds of thousands of views. This year, even before the official August 6 recruitment start date, the #BamaRush hashtag was full of videos of active members dancing in front of their houses, an obvious play to hype up the chapter to curious PNMs. It’s clear at this point that having a TikTok presence matters, at least when it comes to showing off your sisterhood.

There have also been rumors of a ban on PNMs posting about their rush experience this year. The university’s Panhellenic Association confirmed to Mashable that there is no official ban on social media use, but the speculation may be enough to keep many women from sharing their experience online compared to last year’s recruitment. The selection process for Greek life is notoriously subjective and secretive, so there is incentive for PNMs to be extra cautious when it comes to anything that might hurt their chances of getting a bid. Remember Makayla Culpepper (@whatwouldjimmybuffettdo), one of the stars of last year’s #RushTok, who was dropped by every sorority after reaching TikTok stardom for her rush week OOTDs? It’s easy to wonder if she would have had the same scrutiny had she not been TikTok’s It Girl of the moment.

I didn’t have an Instagram account when I went through recruitment (I pledged a sorority at a small Southern school in 2012), and our biggest question was whether we could request to be Facebook friends with active members. It was a gray area — better to avoid it unless you knew them before college. Even when I worked for nationals, the social media rules for chapters centered on Instagram and Snapchat, platforms where there wasn’t really a risk of becoming massively internet famous overnight. You had to be careful what you posted, sure, but you were never going to have millions of people watching your every move.

It’s helpful to keep this in mind when tuning into “Season Two” of #RushTok. The videos shared by PNMs are garnering plenty of positive comments, and it’s obvious that these young women already have an online fan base (parasocial relationships at their finest, people). But there’s a lot buried beneath the surface of colorful Panhellenic T-shirts and brightly colored tennis skirts, and it’s worth considering whether this process could be on a crash course toward catastrophe, or at the very least, an unsuccessful bid day.

While I love seeing these OOTDs (and am already being influenced by the cute outfits), I'm crossing my fingers that these women all have the experience they’re hoping for. I remember how it feels to be in their position, and for their sake, I can’t wait for bid day to be here already — and judging by the enthusiasm on TikTok, I’m sure the millions of people watching this year’s #BamaRush feel the same.

More like this
Why Everyone Is "Soft Tagging" Friends On Instagram Right Now
By Alexis Morillo
This TikTok Song About An Unrequited Romance Has FYPs In Shambles
By Emma Carey
On TikTok, Tinned Fish Date Night Is The Latest Viral Food Obsession
By Emma Carey
TikTok's Butter Board Might Be The New Cheese Plate
By Emma Carey
Get Even More From Bustle — Sign Up For The Newsletter