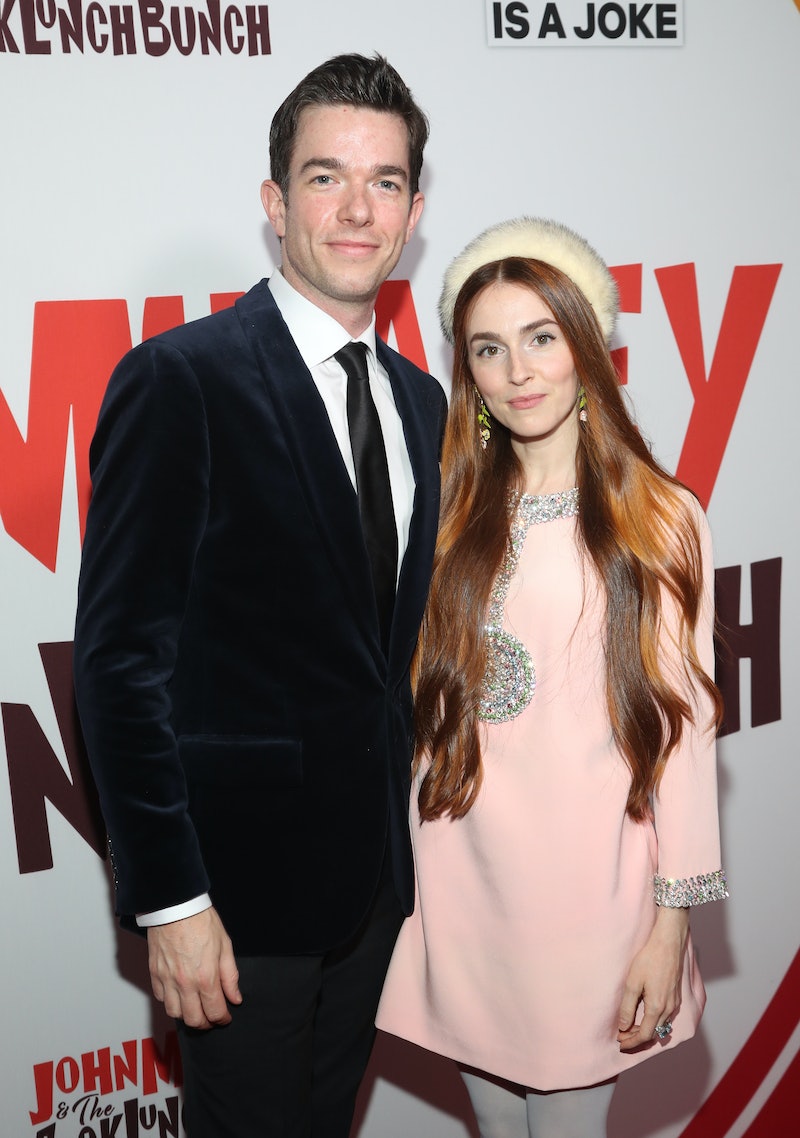 Just when you thought the John Mulaney saga was settled, the comedian confirmed last week on Late Night With Seth Meyers that he and his new girlfriend, actress Olivia Munn, are expecting, and further are “really, really happy" about it. The news stirred up all kinds of questions about Mulaney’s ex Anna Marie Tendler, his previous statement about not wanting kids, and the loveable “wife-guy” persona the comedian cultivated in his work.

From fans coming out on TikTok as “Team Anna” (the #annamarietendler hashtag currently has over 12 million views) to describing Mulaney on Twitter as a type of guy who “convinces you he is sensitive but is really just a narcissistic emotional vampire of a f*ck boi,” the breakup is garnering more attention than their relationship ever did. Fans are even tweeting about being “triggered” from the split, and otherwise experiencing a deeply emotional reaction to the lives of famous people they don’t know, and likely will never meet.

People break up. People start relationships with new (sometimes more famous) people. People change their minds about wanting kids. None of this is particularly far-fetched, so why is the John Mulaney news impacting everyone so intensely?

If you’ve been on the internet in the last week — especially if you watched the Steve from Blue’s Clues video — you’ve probably seen the phrase “parasocial relationship” floating around. Though it seems like snappy pop psychology, the term was originally coined by academics Donald Horton and R. Richard Wohl in their 1956 paper Mass Communication and Para-social Interaction: Observations on Intimacy at a Distance.

“People used to love their newscasters,” Dr. Gleason tells Bustle. “They would watch the evening news and be like, ‘He’s such a great guy!’ And feel a certain kinship or closeness.”

Dr. Gleason’s research mainly focuses on young children’s relationships with imaginary companions, but the psychology at play there is actually not so distinct from the way adults feel about celebrities, athletes, and comedians with large Twitter followings.

In other words, your little cousin may have an imaginary friend Lucy who’s part hippo, part elephant, and only eats ice cream. You, on the other hand, have watched New In Town more times than you can count and harbor an undying love for John Mulaney which runs so deep that you’re feeling upset, even betrayed, by his recent actions. The relationship doesn’t have to be real for it to generate real feelings.

What Is A “Parasocial Relationship”?

“It might not be with the actor themselves but the character the person portrays,” she says. “Really highly-developed characters can be attractive objects of parasocial focus.”

In the age of social media, however, Dr. Gleason explains that it can be challenging to separate celebrities from their online persona — especially comedians, podcasters, and influencers who are essentially famous for being themselves. On Instagram, pics of Mulaney’s dog Petunia are in your feed next to selfies from your bestie’s honeymoon or your little brother’s dinner. Because of this, Dr. Gleason says it’s even easier to feel like celebrities are your friends.

“But the information you have about this person is highly curated — especially on social media,” Dr. Gleason says. “The celebrity has total control over the information that you have, but as a consumer of that information, you can imagine that you’re getting the full picture.”

While you may feel a fondness for a character that’s overtly fictional — cue your daydreams about watching a game with Ted Lasso or going to the Queen’s Ball in Bridgerton, you may also picture yourself grabbing a margarita and nachos with Busy Philipps, or going white sneaker shopping with John Mulaney. And because Busy and John are real people, you may forget you don’t actually know them at all.

“Intellectually, if you really push someone, they know that it’s not a real depiction of this person, but that’s not the point,” Dr. Gleason says. “The point of a parasocial relationship is to put yourself into a different, almost idealized zoned.”

Feeling a sense of closeness to a celebrity may conjure images of stalking or sending human hair in the mail. However, Dr. Gleason says parasocial relationships aren’t inherently bad. In fact, they’re often a positive tool for self-discovery.

“The vast majority of cases are not harmful at all,” Dr. Gleason says. “Part of what they do is help us figure out things about ourselves.”

If you’ve dealt with someone close to you overdosing, you may feel solace in knowing Ariana Grande went through it too. Or if you’ve always been shy but want to be better at speaking your mind, seeing Cher’s all-caps political tweets may inspire you to stand up to your awful coworker.

“Parasocial relationships can give you the opportunity to try on a different identity,” Dr. Gleason says. “You can experience it vicariously or by incorporating things into your own life.”

Additionally, Dr. Gleason says that parasocial relationships can allow you to have some low-stakes fantasies. Because your celebrity fashion icon or role model is never going to reject you, feeling connected to them can create a safe space for you to daydream.

“Being able to experiment with different identities, thinking about how you want to be in the world, without having to worry about if someone is going to drop you — that’s fantastic,” Dr. Gleason says. “That’s so comforting. It gives you the freedom to really explore.”

However, Dr. Gleason says the one downside to having parasocial relationships with celebrities, as compared to fictional characters, is that beneath the perfectly-concocted persona, considered branding, and watchful PR team — there is an actual person. A person with agency, who will inevitably do things you don’t want them to. (Like relapsing, dumping their wife, and promptly getting with Olivia Munn.)

Why Did The Internet React So Strongly To The Mulaney Drama?

You’ve seen hypermasculine dude-bro celebrities treat women poorly and go on benders (a certain Captain Jack Sparrow comes to mind.) And while it’s always a bummer, it’s not necessarily surprising. However, the fact that it was John Mulaney — resident nice guy who tamed his wild ways to become a lovable dork who’s obsessed with his wife and his dog — doing the typical celebrity man thing, feels particularly tough to swallow. Fans bought into the comedian’s “good guy” persona, so seeing him exhibit behaviors that counter it is, well, shocking.

“They had a vision of who he was and how they related to him, it worked for them, and he turned out to be a real person,” Dr. Gleason says. “John Mulaney is just trying to live his life and be who he is, but the things that he’s done don’t fit with this appealing persona that he had prior.”

Because Mulaney was so outspoken about his own recovery, his ability to change, and his tender feelings for his artsy wife, fans felt like they really knew him. They related to him and aspired to be like him, and in doing so, painted him as the perfect partner.

“Obviously we know nothing about his life or his marriage or any of those things, but it now seems like he's making these decisions that go against who he is,’” Dr. Gleason says. “But ‘who he is’ is an image of who he is, as opposed to who he really is.”

Dr. Gleason continues that because John Mulaney was seen as “reformed,” fans grew comfort in thinking his unfavorable or unflattering behavior was in the past. “It’s like, ‘I want you to be flawed in the way you were before, when you had recovered and it was this admirable story, I don’t want you to be flawed for real,’” she says.

If you’re feeling upset about all the John Mulaney stuff, you’re definitely not alone. TikTok is overflowing with #teamanna content and Twitter is chalk full of John Mulaney hot takes. However, before going down your own internet-induced spiral, Dr. Gleason suggests taking a second to think about all the stuff you probably don’t know about Mulaney and his personal life. While it can be positive to feel connected to a celebrity that you like, assuming too much about them and their lives can hurt you both.

At the end of the day, John Mulaney is a real adult human who gets to make his own choices. And you, also a real adult human, can choose not to funnel so much of your finite emotional capacity into celebrity you don’t actually know. Alternatively, just stick with Busy Phillips — no way she’ll ever let you down.

More like this
Do I Have To Tell My Crush That I Slept With Her Ex?
By Sophia Benoit
Bumble's "Compliments" Feature Lets You Message Before You Match
By Lexi Inks
14 Underrated Date Ideas To Try With Your Partner
By Lexi Inks
It's Hot When People Can Do Mental Math
By Sarah Berman
Get Even More From Bustle — Sign Up For The Newsletter