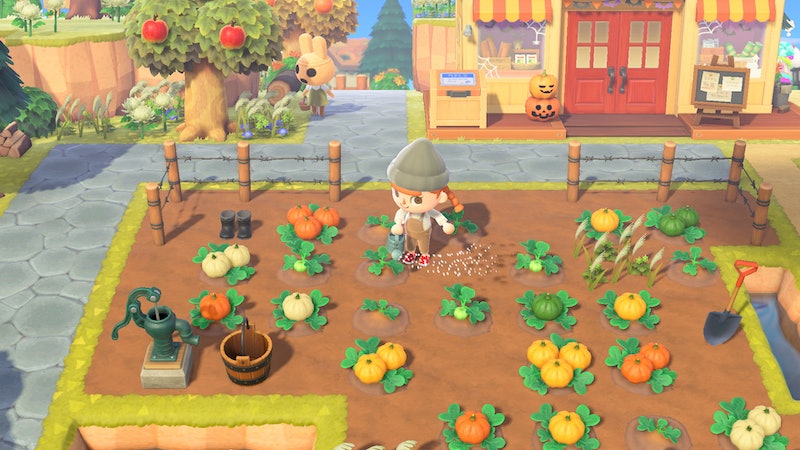 Spooky season has officially begun on Animal Crossing, and it's time to decorate your island accordingly. There's still plenty of time to prepare your home for Halloween, whether that's perfecting your pumpkin patch or collecting enough candy for a certain pumpkin-headed visitor. So here's how to make the most of Animal Crossing's Halloween event on New Horizons.

Meet the Czar of Halloween

It may be a little hard to distinguish Jack from your island decor, but you'll deffo want to treat this pumpkin-headed character. The self-proclaimed Czar of Halloween, Jack has been the source of spooky furniture previous games which are obtained by giving him candy. If you don't have a treat, he'll subject you to a trick which would result in mouldy items of clothing, turning an item in your inventory into a Jack-in-the-Box or taking an item altogether.

Jack seems to be up to his same tricks again this time around but has substantially reduced his items to four. Which is understandable, seeing as the player can craft dozens of new pumpkin-themed items thanks to the new ability to grow them. But if you want Jack's costume, a pumpkin carriage or wand, you'll have to hand over some candy and lollipops on October 31. You can buy candy once per day at Nook's Cranny, but you can only receive lollipops by your neighbours on Halloween once you've given them candy.

How to grow pumpkins

Pumpkins mark the first time that food can be cultivated from the ground as up until now, players could only grow a small variety of fruits on trees. Pumpkin starts are now available to buy at Nook's Cranny at 280 bells each, but you can also buy them from Leif for 140 bells.

Once you've got your seeds, find a space to plant them and you're good to go. You can grow a maximum of three per seed, which depends on how much you water them. If you tend to them for the full four days, you'll produce a batch of three pumpkins. If you don't water them at all, you'll only get one. The pumpkins come in four colours – orange, yellow, green, and white — and you won't know which you have until you've planted them. If you want to customise items from the Spooky furniture set, this is where these varieties come into play.

The Spooky Set features 17 new items which can be obtained through DIY recipes, seasonal items at Nooks Cranny, and exclusively from 6 p.m. to 1 a.m. on Halloween itself. Apart from the things to get from Jack, villagers will give you flooring, wallpaper, a garland (and recipe), a rug, and a table setting (and recipe) according to Animal Crossing World.

And who could forget costumes? Unlike Bunny Day, the new clothing can be purchased throughout October by visiting the Able Sisters. There's been a selection of Halloween-like costume to choose from since the game's launch, but the new update has added things like animal-themed hats and shoes, witch and wizard robes, as well as devil horns and bat wings.

New skin and eye colours have also been added, which are accessible through the terminal at Resident Services. Just go to 'Redeem Nook Miles' and scroll to find 'Body-Paint Costume Tips' and 'Exploring New Eye Colours', both of which cost 2,400 Nook Miles. To make your costume complete, there are also two new reactions to learn, one you'll get from Jack and the other from your villagers.

The crisp leaves and orange hue of autumn are signals for new bugs and fish to catch this October. These include:

More like this
Here's How To Get Your iPhone To Update Automatically Forever
By Emma Carey
Why Everyone Is "Soft Tagging" Friends On Instagram Right Now
By Alexis Morillo
Twitter Is Praising George & Charlotte's Attendance Of The Queen's Funeral
By El Hunt
The Prince William & Rose Hanbury Rumours, Explained
By Frances Stewart and Sam Ramsden
Get The Very Best Of Bustle/UK