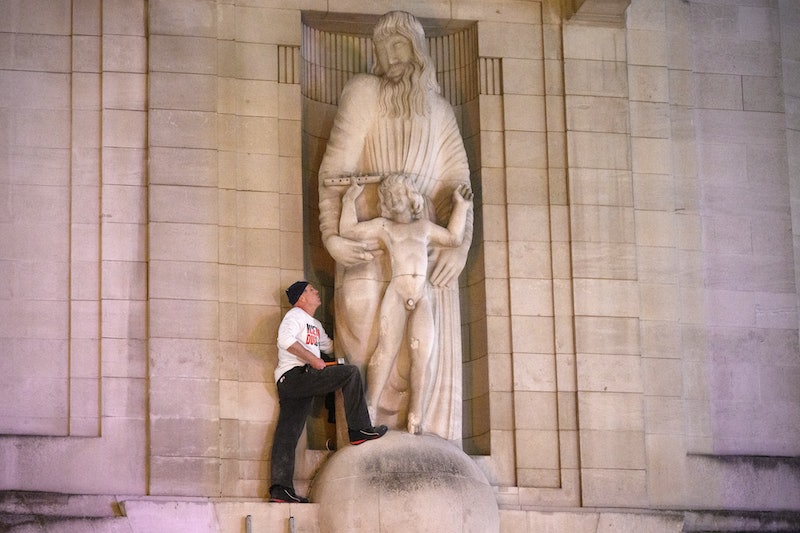 A statue above the entrance to BBC Broadcasting House has been damaged by a man with a hammer, reports the BBC. Carved by sculptor Eric Gill and erected in 1933, the 10ft figures depict Prospero and Ariel from Shakespeare’s The Tempest.

According to the Independent, police were called to the scene on Wednesday after they received reports of a man destroying parts of the bottom portion of the artwork. Another man was also arrested on suspicion of conspiracy to commit criminal damage.

Eric Gill is regarded as one of Britain’s greatest artists, but he was also accused of being a paedophile. A 1989 biography of the sculptor, written by Fiona MacCarthy, including information from his private diaries, to which he admitted sexually abusing his daughters, sisters, and dog.

This is not the first time the statue has caused controversy. Following calls from sexual abuse charities for it to be taken down in 2013, the BBC refused, citing Gill’s record as “one of the last century’s major British artists whose work has been widely displayed in leading UK museums and galleries,” per the Daily Mail.

Last year, a petition was launched demanding that the statue should be removed due to Gill’s history of sexual abuse and paedophilia, and it has since garnered nearly 2,500 signatures.

The protestor who targeted the statue on Wednesday was heard telling police, “If this happened decades ago, I wouldn’t be here would I?”, according to the Daily Mail. He also wrote “time to go was 1989” and “noose all paedos” on the statue. Katie Razzall, culture editor for the BBC, said the man was trying to detach the sculpture “from whatever anchors it to the BBC offices,” and said that another man was live-streaming what was happening from the pavement.

A spokesperson for the BBC said that while the organisation “doesn’t condone the views or actions of Eric Gill”, it thinks “the right thing to do is for people to have those discussions” about whether we can separate the work of an artist from the art itself.

The statement added: “We don’t think the right approach is to damage the artwork itself.”

More like this
Gen Z Are Twice As Likely To Identify As Queer, According To New Data
By Sam Ramsden
Pret & Costa’s Coffee Is The Strongest On The High Street, According To Which?
By Sam Ramsden
This Is When Netflix Is Going To Start Charging You For Sharing Passwords
By Darshita Goyal
Twitter Has *A Lot* To Say About The "Single Penalty”
By Sam Ramsden
Get The Very Best Of Bustle/UK
Sign up for Bustle UK's twice-weekly newsletter, featuring the latest must-watch TV, moving personal stories, and expert advice on the hottest viral buys.