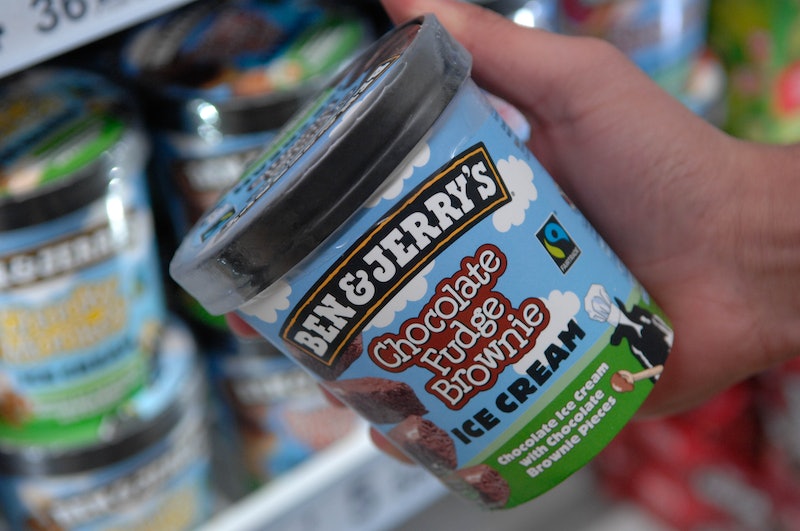 Some things in life are far more simple than others. Cutlery goes in the drawer, your tins go in the cupboard, and you chuck your ice cream in the freezer, right? Well actually things aren't so cut and dry with the latter because guys, you've probably been doing it wrong this whole time. No need to slap yourself on the wrist because Ben & Jerrys have revealed how to store ice cream in a helpful post on their website and your mind is about to be blown.

So seemingly what it all comes down to is dreaded freezer burn. I know you'll be thinking, WTF is freezer burn, but it's an unpleasant phenomenon you've definitely experienced. According to the frost experts over at Ben & Jerrys, it's when large frozen crystals form on the top of your ice cream, making it an "unappealing mess." So what causes it?

"Over time, ice evaporates," they explain on their website. "As the moisture leaves the ice cream and joins forces with moist ambient air, it refreezes on the ice cream’s surface, creating the tell-tale crystals that indicate freezer burn." Adding, "what you’re left with is a concoction that’s icy, crunchy and kinda yucky."

Speaking of looking out for the people's best interests, Ben & Jerry's, long known for being outspoken about social and climate injustice, recently spoke out against Priti Patel and the UK's handling of the refugee crisis. Their message is clear, that no human is illegal. I mean if ever there was a reason to stock up on Ben & Jerry's.

So here's how to keep the goods in tip top shape next time you buy your favourite Ben & Jerry's.

All this considered, your ice cream is sure to be delightful from first bite to last. Just watch out for brain freeze.