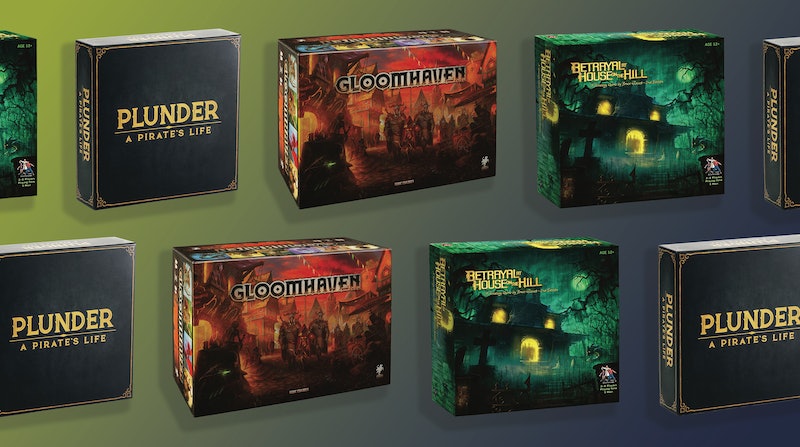 If you’re looking for the best adventure board games, the key is to find a game with a theme you find really appealing, whether you’re into pirates, fantasy, or horror. But themes aren't the only important factor when choosing your adventure; you'll also want to consider how many players it can accommodate (some games even allow for solo play), as well as your preferred length of gameplay. This information is typically provided by the manufacturer.

There are two main styles of adventure board game. Some games involve independent competitive play, with everyone fighting against each other to come out on top. Cooperative adventure games, on the other hand, require players to work together towards a common goal. Before you buy a game, you'll want to think about which style of gameplay sounds like the most fun to you.

Another factor to pay attention to is how involved the game’s setup tends to be. Some adventure board games are super intricate, with tons of tokens, cards, figures, or tiles, while others have fewer pieces so you can begin your game without much effort. Of course, setup isn't the only way in which a game can be complex — some games are genuinely more difficult or complicated than others. If you're hosting a game night with new players in attendance, or if there are younger players involved, you’ll probably want to pick a game that isn't incredibly complicated and involved. The manufacturer's suggested age range can also help you choose an age-appropriate game, or can simply be a helpful clue as to the game's overall difficulty (for example, if 10-year-olds can play, it's probably okay for any beginner adult, too).

These five adventure-filled board games all have knockout reviews on Amazon, with reviewers indicating they’re loads of fun and worth every single penny. So go ahead, play away!

1. A Highly Rated Adventure Board Game You Can Play Solo Or In A Group

With more than 4,200 reviews on Amazon and a near-perfect 4.9-star rating overall, it’s clear that Gloomhaven by Cephalofair Games is wildly popular among those that have played it — and it's super easy to see why. In the game, players take on the role of a wandering adventurer and they must work together — yes, it’s a cooperative game! — in order to clear out menacing dungeons and forgotten ruins, all while fighting off dangerous monsters. The Gloomhaven world evolves as the team makes decisions on what to do (think "choose your own adventure" style gameplay), and the characters will also get more powerful as the adventure progresses, too.

Gloomhaven takes a while to set up, involves loads of strategy, and is ideally played over many game sessions, so it’s not necessarily the best pick for one-off game nights due to its complexity. For repeat plays with a dedicated group of players (or even by yourself), though, it's unbeatably entertaining.

Enthusiastic Amazon review: "My husband and I are continuously shocked by how obsessed we are with this game. We want to play every week, for 6+ hours a week. It is just SO GOOD. It's so interesting, and so immensely satisfying to play. There are so many levels of success, and choices to make, and adventures to go on. [...] We felt like we got our money's worth after 4 scenarios - and there's like a hundred to go!"

2. A Horror-Filled Adventure Board Game

Avalon Hill Betrayal at House on the Hill
Amazon

With a creepy mansion ready to be explored, Betrayal At House On The Hill by Avalon Hill is truly a horror-lovers’ dream game. The cooperative game requires players to work together to escape the house, collecting items and experiencing some seriously spooky encounters along the way — spirits, monsters, and frightening omens… oh my! However here is where the game gets extra interesting: One player eventually becomes a traitor, working against the other players to prevent them from leaving the house alive. With more than 50 traitor scenarios and a new mansion layout each time, the adventure game has plenty of replay value, keeping both new and returning players wildly entertained. And if you ever get bored of the game, you can pick up a spooky expansion full of new cards, scenarios, and rooms to explore — or you can grab a copy of Betrayal at Baldur's Gate, which sets the game in the D&D universe rather than a haunted mansion.

The game takes about 60 minutes to play, but just know that there is a good amount of setup required since it has detailed game pieces like character cards, plastic figures, and tokens.

Enthusiastic Amazon review: "A unique and excellent board game. Players take on the role of Scooby-Doo-like explorers in a haunted mansion, although what waits inside is much worse than a grumpy old man in a monster suit. The exact nature of the threat lurking in the house is randomized each game, and the wide variety of scenarios really change the feel of the game from quirky action-adventure to utter horror or suspenseful thriller. The layout of the house changes each game too, as the rooms are randomized and revealed each time the players open a new door. One of the keys to the game is that all the players start the game cooperating with each other, but at some point one of the explorers will be revealed as a traitor and becomes the mastermind behind the haunting of the mansion. It's really a blast to play and seemingly never gets old."

3. A Fantasy Adventure Board Game For Fans Of D&D

The perfect introduction into the fantasy-filled world of D&D, Hasbro’s Dungeons & Dragons Adventure Begins is a cooperative game where the characters travel through the lands of Neverwinter, working together to overcome obstacles, battle enemies, and defeat the monster terrorizing the realm. The role of Dungeon Master passes from player to player, so everyone gets to take part in the storytelling. And since the game gives players a new and unique adventure each time it’s played (and since many Amazon reviewers report having an enjoyable time adding in some fun roleplaying), it truly never gets stale.

Low in complexity and involving only some minor setup, Dungeons & Dragons Adventure Begins is perfect for game nights — and many reviewers on Amazon indicate that even their kids like to join in on the fun, too. The game has a solid 4.7-star rating overall on the site, after more than 1,000 reviews.

Enthusiastic Amazon review: "Fun to play! It lets you be creative while you deal with each encounter, (weather its a monster or a choice to make). Good beginner D&D game. [...] High replay value, good graphics on cards and cardboard cutouts , and the price was great."

If you’re seeking a pick that involves a healthy dose of competition, Plunder A Pirate's Life is a highly captivating adventure board game that pits players against one another in a quest to conquer the high seas. The strategy-filled game requires players to command their fleet, wage war against rival captains, overtake islands to gain resources, and navigate the dangerous waters that surround them. Players can even build and upgrade their ships to gain additional power.

With a knockout 4.8-star rating overall on Amazon, reviewers indicate that this board game is easy to learn and set up, making it a good option for casual game nights. Best of all, it has plenty of replay value, since the double-sided board tiles allow for a unique map configuration each game and since it can be played cooperatively or competitively, so you'll want to keep this pick permanently in your board game rotation.

Enthusiastic Amazon review: "I absolutely love this game ! [...] Like the others have said it’s easy to learn and makes you really feel like you’re living the pirates life with tons of fun competition thrown in to keep you and your friends / family pitted against each other in a high seas adventure ! Love it."

5. A Complex Adventure Game Set In The Lord Of The Rings Universe

War Of The Ring by Ares Games allows players to totally immerse themselves into the world of J. R. R. Tolkien's The Lord of The Rings, experiencing action, conflict, and (yes) adventure. The competitive board game isn’t for the faint of heart — it’s complex, lengthy, and highly strategic, but these are all things that reviewers on Amazon indicate they truly love about the game, hence the game's impressive 4.8-star overall rating on the site. While reviewers suggest that setup can take a while when you’re first learning the ropes, many suggest that once you get the hang of the gameplay, this pick truly becomes an obsession.

To play War Of The Ring, one player takes control of the Free Peoples, while the others control the Shadow Armies of Sauron. With each roll of the dice, the story different possible outcomes occur, including moving armies and characters, recruiting troops, and generally helping the story unfold.

Enthusiastic Amazon review: "This game is a masterpiece. [...] Once you’ve played through it once you will start to think ohhh next time I will be sure to do this.. and then the next round you’ll learn more and more until eventually it’s all strategy. The level of depth is so satisfying and unbelievably amazing. The miniatures, board, and dice are of good quality and take up an impressive amount of space. The artwork is awesome and I appreciate it being different than the movies. This is a must own for anyone who likes board games or any lord of the rings fan out there. Each game is super thematic to retelling a new story. [...] Provided that you have a second player willing to dive into middle earth with you.. this guarantees hours of adventurous battle that always leave you wanting to rematch the next day."

More like this
Designers Say It's Surprisingly Cheap & Easy To Fix These Eyesores Around Your Home
By Laura G.
The 7 Best Microwavable Coffee Mugs
By Kirsten Bakstran
Contractors Say Your Home Could Be So Much Nicer For Less Than $45 With Any Of These Clever Things
By Jenny White
The 11 Best Warm Blankets
By Mackenzie Edwards and Carina Finn
Get Even More From Bustle — Sign Up For The Newsletter