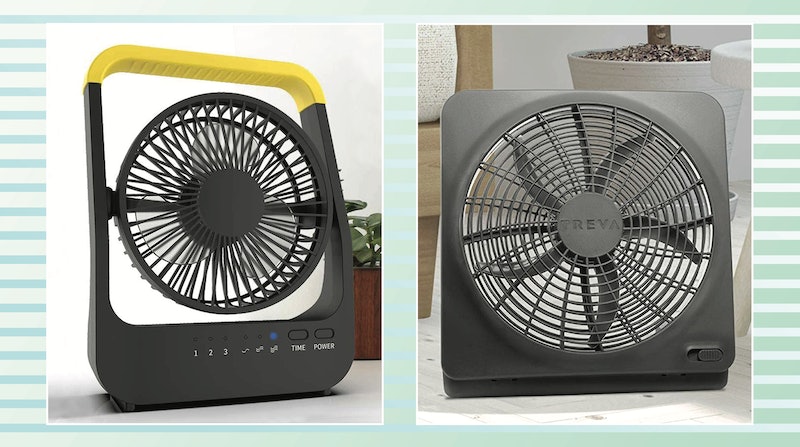 When the heat kicks in, the best battery-operated fans keep you cool with a long run time, strong airflow, and quiet operation. Run times vary from about two to 50 hours, and while batteries play a role in run time, higher quality fans run longer on the same battery than lower quality options. Judging quality can be tough just by looking at a fan, so it’s a good idea to read through reviews and see what people who have used the fan say about its power and run time. Run time can also be increased by having a larger battery bank to hold more batteries or an optional cord for plugging into a power source when one is available. If you’re going to be using your fan heavily, look for one that works with rechargeable batteries so you won’t have to constantly replace them.

What Criteria To Consider

When it comes to the amount of airflow you’ll get from a fan, the fan’s size and motor play significant roles. Larger fans can move more air than smaller ones, and more powerful motors can churn air better than weaker motors. However, both size and motor power can add weight to your fan, so if you need to carry it around, consider what you’re willing to compromise when it comes to airflow and portability.

If you’d prefer a legitimately quiet fan, look for a brushless motor and good range of speed settings, since lower speeds are usually quieter. And when in doubt, go bigger, since larger fans can create more airflow without kicking up as much noise as a small fan. Some fans actually list a noise level in decibels. If this is available to you, look for a range between 30 and 50 decibels — 50 decibels is about as loud as rainfall, while 30 decibels is whisper-quiet.

In a hurry? These are the best battery-operated fans:

This roundup of battery-operated fans includes a range of portable, long-lasting options that’ll work well, whether you’re gearing up for your next camping trip or you just want an extra fan or two to increase airflow in your home without using up all the outlets.

1. A Battery-Operated Table Fan That Can Last 214 Hours On A Single Set Of Batteries

This portable battery-operated fan may look simple, but it packs a lot of cool features into the small 7-by-9.8-inch frame, earning it a 4.4-star overall rating based on more than 1,600 Amazon ratings. Some of the best features include a 180-degree adjustable head so you can direct the airflow where you need it, an optional USB cable charger so you can save battery by plugging it in when you have an outlet nearby, and a timer feature than can automatically turn the fan off after one, three, or five hours. The fan’s sturdy frame allows it to function as a standing, table, or hanging fan for your home, workspace, or even your tent. While the four D batteries you’ll need aren’t included in the box, this fan can last as long as 214 hours on a single set, so you won’t be buying batteries very often. And with a maximum noise level of 50 decibels, it’s also a great pick for those who need a quieter fan. Choose between blue and yellow options.

According to one reviewer: “This is the 2nd fan that I have purchased and it is GREAT! It is a powerful fan, yet quiet! Good battery longevity. Multi speed fan selection button. Timer button. Lightweight and very portable. Works great with USB cord included. I can also plug it into a USB power bank. Tilts in numerous directions. A pleasure to review a product that I enjoy so much. Good value for the money.”

Weighing less than 2 pounds and sporting a convenient built-in handle, this battery-operated folding fan from Treva is a great pick for your outdoor adventures or travels. The foldable design helps it fit easily into a bag but also gives you the ability to adjust the fan head by tilting it to just the right angle.

The fan measures 11.9 by 10.2 by 12.5 inches when fully unfolded and doesn’t come with batteries, but it can last up to 53 hours on a single set of six D batteries and has an AC adapter so you can plug in when you’re near an outlet. This portability and convenience have helped it earn an overall 4.5-star Amazon rating, based on more than 6,900 ratings and counting. While reviewers report that this isn’t the quietest fan, the lower setting provides good white noise for sleepers who like keeping a fan on for that purpose.

According to one reviewer: “I live in a very hot and humid climate, so I have many fans in addition to AC. This is by far the best fan to own overall because it can run on electricity or batteries. There are better electric fans if that’s all you want, but this is the best fan if using batteries. Really puts out air and can cool a small room. I keep mine in the bathroom most of the time, but it is always with us during a power outage. I have purchased 2 for my house (always like to have a backup for important items) and given several as gifts to people who live in Florida and have to worry about hurricanes. Highly recommend it.”

3. A Battery-Operated Floor Fan With Lots Of Power

With metal blades and a brushless motor, this powerful floor fan packs a cooling punch. The heavy-duty fan has a built-in rechargeable battery that can last anywhere from four to 20 hours on a single charge — and you can even use it while it’s charging. The back of the fan also has a battery indicator that tells you exactly how much battery life is left so you can get it to a charger before that precious airflow stops.

Other features users love include this fan’s built-in handle, a 360-degree adjustable fan head, and its outdoor-friendly water-resistant design. It also has a stepless speed control, meaning that you can precisely adjust the speed of the blades by rotating a knob instead of choosing from a limited set of fixed speeds. With such a premium design, it’s easy to see how it got its 4.6-star overall Amazon rating after more than 4,300 ratings.

At 17.1 by 7.9 by 15.7 inches in size (width by depth by height) and weighing nearly 9 pounds, the 12-inch version of this fan is on the bulkier side, but it also comes in a slightly smaller 10-inch size if you’d prefer something more compact. Both versions have a quieter brushless motor, but you may find that the 12-inch version’s strong airflow is worth its extra bulk.

According to one reviewer: “This little fan packs a punch. On high it is pretty strong. Will make a hot night of camping much cooler. Glad we purchased this and will be getting a second one. Love that it is rechargeable. [...] On full speed and full charge the fan ran for 4 hours and 45 minutes.”

4. A Fan With A Flexible Tripod You Can Mount Almost Anywhere

This handy little battery-operated fan weighs in at less than 1 pound and, while AMACOOL doesn’t provide exact measurements, is small enough to toss in a bag on your way out the door. The built-in rechargeable battery lasts up to 10 hours on a single charge, and the USB charging cable means you can charge this in your car, on your laptop, or with any USB wall charger. However, the fan’s most unique design feature might be its flexible tripod base. You can bend the three 7-inch legs in any direction which is convenient for mounting it to different places. It’s advertised as a stroller fan but this cool design lets you easily mount it to your treadmill, stand it on your desk, hang it in a tent, or put it anywhere else you need.

For campers or people who like to read at night, this fan even has an LED light with three brightness levels. The fan head itself rotates 360 degrees in both vertical and horizontal directions. No matter where you mount this, you’ll be able to adjust the fan head to direct airflow. While the decibels aren’t listed, reviewers report that this fan is relatively quiet on any of the three speeds. With so many cool features, it’s no wonder it’s maintained a 4.6-star overall rating after more than 29,000 Amazon ratings. It’s also available in three colors.

According to one reviewer: “We live in Florida and realized how badly we needed a fan for our newborn. We use it pretty much on a daily basis. We put it on her car seat and on her stroller when we go on walks. I’ve even propped it up on our desk when I’m working and holding our daughter. The three speeds are great: low usually offers just enough of a cool down and high is very impressive because it’s fast and quiet. The lights we didn’t really need but has been a nice feature to have. Our daughter hates going in her car seat and this helps to distract her sometimes. Plus, since we live in Florida we have to wait to go on walks until later in the day and the light lets us be seen easier. Overall, it’s a great and I’d definitely recommend!”

5. A Lightweight Foldable Pick That Works As A Table Or Floor Fan

There’s a lot to love about this battery-operated fan, but the coolest thing about it is that it can function as either a table fan or a floor fan, since it has an extendable base that can be expanded from 5.8 inches up to 40.5 inches. You can also tilt the fan head and the extending pole to get just the right angle after you’ve set it to the perfect height. The fan’s adjustable height doesn’t interfere with its portability either, since it weighs just over 2 pounds and folds down to 3.7 inches thick. This means you can easily take this with you and have a full-length, oscillating floor fan.

The fan’s built-in rechargeable battery comes with a USB charging cable and lasts up to 24 hours on one charge on its lowest of its four settings. Those looking for a quiet fan will also love the fact that this one reaches just 40 decibels on its highest setting. It also comes with a remote control for easily turning it on and off and switching through its functions.

According to one reviewer: “This is the best fan of its type. Loads better than the one you see advertised on TV (both of those broke within a month). This fan is sturdy, lightweight, and portable and comes with a remote. Power went out, and this fan has been running non-stop on a single charge for over 12 hours so far (not kidding). Get this fan!”

More like this
The 10 Best Fans For Bedrooms
By Kim Quindlen and BDG Commerce
The 50 Cheapest, Most Impressive Home Upgrades On Amazon
By Veronika Kero
These Weird But Genius Things Are So Popular, Amazon Can Barely Keep Them In Stock
By Maria Cassano
40 Mistakes You Don't Realize Make Your Home Look Sh*tty But Are Actually Easy To Fix
By Julie Peck
Get Even More From Bustle — Sign Up For The Newsletter

This article was originally published on May 16, 2021