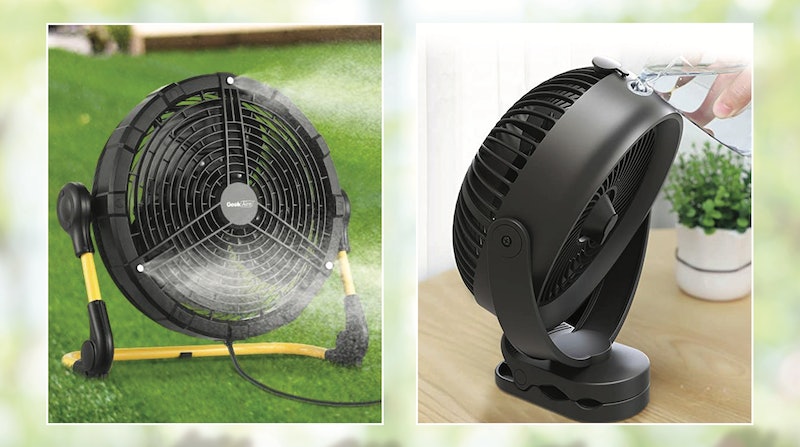 In extreme heat, standard fans provide only so much relief, but — with a little help from water — misting fans can actually lower the ambient temperature and provide a cool, comfortable effect against the skin. From powerful pedestal units to portable options you can hold in your hand, the best misting fans will offer the amount of airflow you want, whether you’re on your back patio or on your way to Disneyland. Here are some features to consider while you shop.

Full-size floor and pedestal fans are capable of cooling off large areas quickly, and they’re ideal for backyards and patios. Some of these fans attach to a garden hose as their water source, but others have built-in reservoirs that allow you to operate them even when you don’t have a hose nearby. The airflow on these more powerful units is measured in cubic feet per minute (CFM), and I’ve included options that range from 1,500 CFM to 2,800 CFM. For the most coverage, look for a misting fan with an oscillating head that’ll direct the air and mist to multiple areas.

Many fans are rechargeable, so you can move them at will, but if you plan to plug your fan into an electrical socket, keep an eye out for certain safety features that reduce the risk of electric shock, like an inline ground-fault circuit interruptor (GFCI) plug, an auto-shutoff feature in case of leakages, or 24-volt DC voltage, which will cut the power supply in case of a short.

Besides high-powered, full-size fans, I’ve included a compact model that clips onto flat surfaces, as well as a handheld fan that’s perfect for on-the-go use. The best misting fans below will allow you to enjoy life outdoors, no matter how high the temperature gets.

This 12-inch misting fan from Geek Aire dispenses mist from up to 11.5 feet away, so you can sit on the other side of the patio and still reap its cooling benefits. It attaches to a garden hose and has a sturdy frame with a tilting head that can be positioned in the direction of your choice, where it blows air at a rate of up to 1,500 CFM at the highest speed setting on the stepless dial. For safety, it uses secure 24-volt DC voltage, and you can plug it into a standard electrical outlet, but it also comes with a rechargeable power bank that offers between three and 24 hours of operation on a full charge — perfect if you want to place it a little farther out in the yard. Weighing just 7 pounds, it’s waterproof, rustproof, and UV-resistant for long-lasting use.

If you like this option and want even more cooling power, it’s available in a 16-inch version that offers 2,300 CFM of airflow.

Helpful review: “Living in Arizona and with recent temperatures exceeding 110F, we had to find a solution to beat the heat. This portable fan eliminated the need to install a fixed mist system. After receiving the fan it was very easy to put it into operation and worked as advertised.”

If you like a more traditional style, this pedestal fan from NewAir has an 18-inch tilting head, three speeds, and an oscillation function — the only one on the list with that feature. It’s the most powerful, too, boasting an airflow rate of 2,800 CFM. Made from durable bronze-colored metal, it covers up to 600 square feet when the misting function is engaged, making it a great option for large spaces, whether on a patio or backyard. A standard garden hose attaches to a valve at the back of the fan, which has a convenient on/off switch that eliminates the need to go to the source to turn off the misting function. The NewAir has a range of built-in safety features, like an automatic shutoff in the event of a leak and a built-in GFCI plug.

Helpful review: “Powerful and relatively quiet for a large fan. Sturdy heavy base keeps it in place while operating at any speed. The built in mister hose makes it so easy to move around and reconnect anywhere from front yard to back. Keeps the deck cool on hot Texas days.”

3. The Best Portable Misting Fan With A Reservoir

Also from the Geek Aire brand, this 12-inch portable misting fan is powered by a rechargeable battery and features a built-in 2.9-gallon water tank that allows you to operate the fan and mister anywhere, regardless of whether or not there’s a hose nearby. The 1,500 CFM fan has a stepless speed dial and a pivoting head, so you can control the amount and direction of the airflow, and it releases mist that reaches up to 11.5 feet away. Depending on the speed, the battery can operate the fan between three to 23 hours in fan-only mode and between 1.5 to two hours when using the mister. The fan’s sturdy frame has a top handle and a wheeled design that makes it highly portable and easy to store, and the clear window on the side of the tank helps you keep track of your water level, so you know when it’s running low. Plus, you also have the option of attaching a garden hose to the unit for use.

Helpful review: “It was about 90 degrees in the shade when I put this together. I did a quick test with an instant read thermometer....standing about 8-10 feet away and it dropped the temp about 14 degrees [...] The amazing thing about this is it is completely portable, backyard, park, beach...completely self contained.”

If you don’t need the power and coverage of a full-size misting fan, this compact model has an 8-inch diameter and a versatile design that can sit upright on a flat surface or clamp onto a table, golf cart, or umbrella pole. The USB-chargeable fan supplies non-misting power for six to 48 hours (depending on which of the three speeds you use), and one to two hours when using the misting function. Speaking of which, the integrated 200-milliliter tank supplies water, and the misting can be run continuously or on an intermittent basis. This fan is best for smaller spaces (there’s no CFM measurement or square-foot coverage listed), but reviewers were pleased with the amount of cooling relief it offers. Whether you’re working at a table outdoors, using exercise equipment, or taking a nap in the shade, this portable, compact fan will let you bring cooling relief along.

Helpful review: “This misting fan is a dynamo! Compared to the misting box fans I've seen, this is a far better alternative. Powerful enough to reach you across a small room and to bring the cool, moist air too! I'm thinking about getting a few more to cool the whole house with these fans!”

Misting fans for Disney World, amusement parks, the beach, and camping require a compact size and a portable design, and this model from O2COOL fits the bill. The handheld misting fan is about the size of a water bottle, with a reservoir that holds approximately 1,000 individual “mists,” which are activated via a pump trigger under the fan’s soft blades. The simple device has a single speed that’s powered by two AA batteries. The water reservoir has a removable base for easy refilling, and it’s large enough to hold ice cubes for an extra cooling effect. The O2COOL comes in multiple colors and is small enough to pack in a backpack or purse.

Helpful review: “This little fan was a life saver during our Disney World trip! For such a small fan, it holds a lot of water. I filled it up once and didn't have to refill for hours! I get overheated very quickly but this fan made the Florida heat more tolerable.”