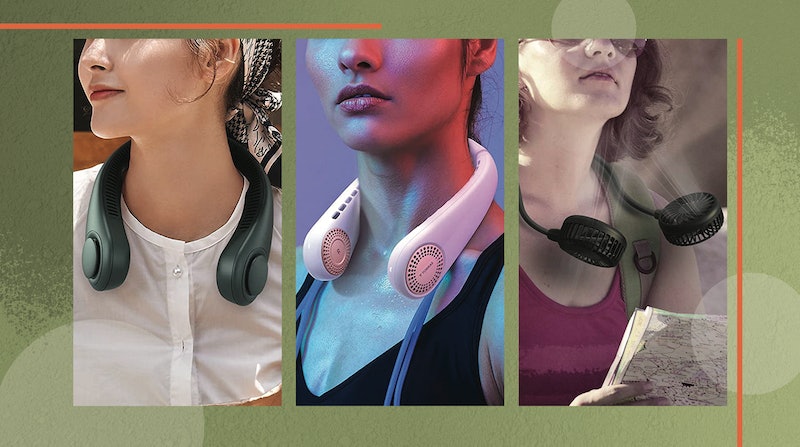 If you want to bring a breeze with you, the best neck fans make it possible to cool down wherever you go. Your ideal neck fan will depend on if you prefer a wrap-around or hanging style, as well as if you want your fan to have blades. You should also consider how the neck fan is powered, as some have built-in, rechargeable batteries and others require replaceable batteries.

Neck fans come in two main styles: ones that wrap around your neck like headphones, and ones strung on a lanyard.

In any case, comfort is essential for neck fans. Especially if you plan to carry your neck fan for long periods of time, you might also prefer one that’s lighter. For reference, a pair of lightweight headphones will weigh under 0.6 pound (or 8.8 ounces) — and you’ll find plenty of options in that range below. If you’re easily distracted by sounds, check if the manufacturer specifies how quiet a fan is, in decibels (dB). The quietest fan on this list produces as little as 25 decibels of sound (which is as quiet as a whisper). If a decibel rating for a fan isn’t listed, it can be helpful to check that reviewers have confirmed they’re fairly quiet.

Almost all of the neck fans on the list are powered by rechargeable batteries. The exception is one pick that uses replaceable batteries — which is the cheapest option up front, but you’ll also have to factor in the cost of replacing the batteries over time. With that in mind, it might not be the best option for frequent use.

From basic models to options decked out with features like multiple speed settings and water misters, the following personal fans keep things breezy from the neck up — and you can find them all on Amazon.

With a 4.4-star overall rating after more than 11,000 ratings, this bladeless neck fan has gotten tons of rave reviews. It is designed with a wrap-around neckband and features 76 air vents to keep air flowing towards your neck and face. It can run continuously for up to 16 hours on the lowest setting and five on the highest before you’ll need to recharge it with the included USB cable. It has three options for speed and can produce as little as 25 decibels of sound. One Amazon reviewer wrote that the “noise level is perfect on first two settings,” adding that it “does go up a tad on third level but [is] not extremely loud.” The neckband is made from sturdy ABS plastic and flexible silicone, and as a plus, the fan is sweat- and dust-proof.

One reviewer wrote: “Just the best personal fan when it’s a must to keep cool. Has air holes on the back of your neck as well as the sides. This one is hard plastic but quite light. Works for me. Keeps its charge. I’m happy with this purchase.”

This neck fan on a lanyard is fairly basic, but it has a budget-friendly price tag to match. It offers just a single speed setting, which one reviewer mentioned isn’t “too strong but enough to keep your neck cool.” Air is pushed through the vent at the top of the fan and towards your face and neck. Reviewers have reported that the bladed fan operates quietly — and one user even claimed that it’s so quiet you wouldn’t be able to tell that it is a fan. The fan requires two AA batteries (not included) and can run continuously for 12 hours before it needs a fresh pair.

One reviewer wrote: “Love this fan! Works great with just 2 AA batteries. How did I not buy this before? Surprisingly good air flow, really cools you off, and it’s at a great price. I won’t use anything else from now on. Just be careful if you have long hair, not to get it caught in the fan. All in all, very pleased.”

3. A Neck Cooling Fan With A Cooling Plate

It’s pricey and heavier than other options on the list, but this personal fan wraps around your neck and is designed with a cooling plate that can draw heat away from your skin in just seconds. Reviewers have attested it’s a great way to cool down quickly, with one describing that the “fan alone is great, but when you need some extra cooling then turn on the plate and you’re ready to go.” For your safety, the plate turns off after 30 minutes of use.

In addition to the cooling plate, this pick has a bladeless fan that moves air toward and around your face and neck. It also has three speed settings and can operate for up to 8 hours between charges. Plus, it’s quiet — it produces as little as 31 decibels of sound. You’ll also receive a USB charging cable to keep it powered up and a bag to carry the fan with this pick.

One reviewer wrote: “Bought this for traveling on airplanes as they can be quite warm. So far it seems to work well. Very quiet and light weight. Puts out a good amount of cool air and the small cooling system at the back of the neck works great too for a short amount of time.”

4. A Neck Fan With 6 Speed Settings

This wrap-around neck fan features two small bladed fans that you can point in any direction. Beyond that, the dual fans boast six speed options — the most of all the fans on this list — so that you can totally customize the airflow, whether you want a light breeze or a strong gust. When you’re not on the move, you can even set the fan upright and use it as a small desk fan. According to multiple reviews, it’s quiet on the lower speed settings, but becomes noticeably louder as you increase the speed. One reviewer mentioned that it is “a little loud” on the highest setting, but worth the tradeoff for the “extra wind movement.” The fan can run up to 16 hours, and when it comes time to charge, use the included USB charging cable.

One reviewer wrote: “I have tried many different neck fans. I have finally found one that is perfect for me. The charge lasts a long time; many different speeds, I especially like the intermittent speed. It's light and quiet. Fan is adjustable to many different positions. The fan stays where you put it. I have had fans that constantly move and need to be readjusted! This is a great fan for women who are in a constant state of ‘SUMMER’!!!!”

5. A Rechargeable Neck Fan With A 20-Hour Battery Life

If you’re looking for an option with a long-lasting battery, this rechargeable neck fan has the longest run time — up to 20 hours for nearly a whole day’s use. Additionally, the bladeless fan features three speed settings that move air toward your face and neck and is as loud as a whisper, operating at a noise level of just 31 decibels. It has a soft, flexible band that wraps around your neck and can be adjusted. When you finally come around to charging it, you can use a USB cable included with every purchase of this pick.

One reviewer wrote: “These are lifesavers at work. Air conditioning out and work garb is hot. This makes such a difference I highly recommend. Light weight with a long battery life and not loud.”

6. A Foldable Neck Fan On A Lanyard

This bladed fan is foldable with a 90-degree range of motion, so you can point it at your face even when it’s hanging from your neck. It also features three speed settings, and one reviewer wrote that while it is “very strong” for its size, it’s “relatively quiet” at work. It offers a continuous runtime of up to 12 hours and can be charged using the included USB cable. Use the adjustable lanyard to wear around your neck or fold it flat and hold in your hand.

One reviewer wrote: “Excellent way to stay cool. I used it daily in the Amazon River area for ten days. Can be worn around ones neck, put on table, etc to face ones body for cooling. Rechargeable. Recharging is easy and fast. I recharged it daily without it failing. Variable speeds, I generally used low speed. Lays flat for travel, very sturdy, color as shown on site. Would definitely recommend this for anyone.”

7. A Neck Fan With A Water Mister & Kickstand

This neck fan also functions as a water mister to help you stay cool. The device has a little bladed fan as well as a 20-milliliter water tank, and it comes with a small bottle that makes pouring water into the reservoir easy. You can use the mister on its own or with the fan. The fan has three speed settings and a runtime of up to five hours before it needs to be charged with the included USB cable. It comes with an adjustable lanyard, and the fan features a top vent so that air blows towards your neck and face when you hang it from your neck. Plus, this fan has a built-in kickstand, so you can also use it as a tiny desk fan, too. Multiple reviewers have mentioned that the fan runs quietly, but one reviewer noted that you’ll hear it running in “quiet places.”

One reviewer wrote: “Bought this for our Disney World trip. Definitely glad I did. This little fan made the Florida heat in July bearable while standing in line. The cooling mist was a great addition. I chose this fan because it was rechargable and I could use my phone bank to recharge while at the parks.”

8. A Neck Fan With LED Lights

Thanks to its built-in LED lights, this neck fan brings the breeze and adds a touch of fun to an otherwise utilitarian item. The lights can switch from six individual colors as well as a multicolored option. As a bonus, one mode automatically switches among the available colors. The two bladed fans swivel 360 degrees to face any direction and offer three speed settings (that function with and without the LED lights), plus a runtime of up to six hours on its lowest setting. At any speed, reviewers have confirmed that it operates quietly. One reviewer attested that the fan runs quietly enough to use in an office with others, and “no one is bothered” by the noise. The manufacturer doesn’t specify a clear weight, but many reviewers have commended how light it feels, with one shopper writing, “I love the portability and how lightweight it is.” The neckband is also stable enough to stand upright on any flat surface, and the fan comes with a mini USB cable for charging, too.

One reviewer wrote: “I love the light weight handless design. I have 2 small kids and my hands needs to remain free when out doing family fun stuff. With this far I can do that and remain comfortable on hot days. At night the light fuction brings a cool and fun element.”

More like this
The 3 Best Heated Steering Wheel Covers
By Margeaux Baulch Klein
The 7 Best Shampoos For Purple Hair
By Claire Epting
45 Things Under $35 On Amazon That Are Effing Amazing
By Anna Anderson
Home Owners Say They Wish They'd Gotten These Weird But Genius Things Sooner
By Maria Sabella
Get Even More From Bustle — Sign Up For The Newsletter
From hair trends to relationship advice, our daily newsletter has everything you need to sound like a person who’s on TikTok, even if you aren’t.