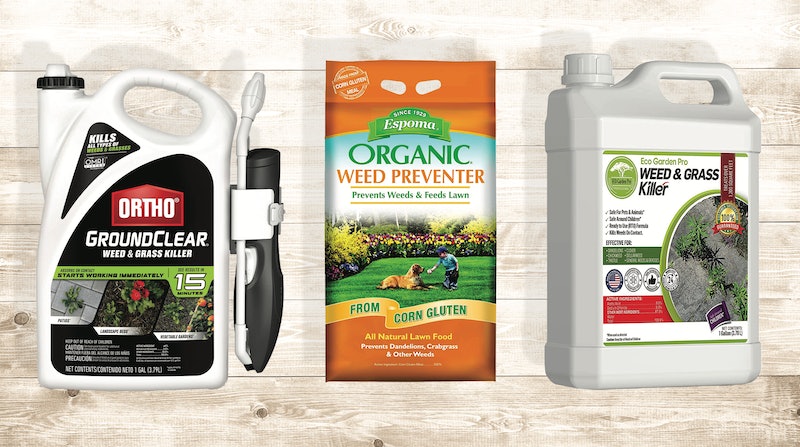 If you want to maintain your lawn and garden without using synthetic chemicals, the best organic weed killers are formulated with natural ingredients at the right concentrations to be safe and effective. Bustle reached out to Bryan McKenzie, a former landscape designer and co-founder of Bumper Crop Times, for his expert advice on the most effective ingredients to look for and how to apply them.

First, there are a couple of things to keep in mind with all organic weed killers. “Organic herbicides are all non-selective and have contact action, which means they kill both perennial and broadleaf weeds and whatever else they touch,” McKenzie tells Bustle, so careful application is a must. It’s also important to drench the whole weed in herbicide. “An organic herbicide must cover the entire plant to kill it. Perennial weeds can easily recover, so treat them harshly,” McKenzie says.

The most common organic weed killers are post-emergent, which means they can destroy weeds that are already grown but won’t be effective at destroying seeds. For maximum effectiveness, McKenzie advises, “Organic herbicides work best on younger weeds, so hurry up to apply them as soon as you notice intruders.” He also recommends applying the herbicide when you have “full sunlight and temperatures above 75 degrees Fahrenheit.”

McKenzie says a 20% concentration of vinegar, or acetic acid, is “deadly for weeds,” and effective against smaller annual weeds and a few types of stronger perennials. Because of the high acidic content, it’s important to follow safety precautions when using vinegar. Be sure to wear protective gear, store it properly, and keep it away from stone walkways and wooden decks to avoid corrosion.

Similarly, citric acid is an effective weed killer when used at a 5% concentration. “There's no need to combine it with vinegar as the component is a powerful weed killer by itself. Still, several remedies combine both to fight severe cases,” McKenzie says.

When it comes to pesky perennials like dandelion, ammonium nonanoate may be your best bet. “Compared to acetic acid, it has a more powerful action, so it's recommended for eliminating adult perennial weeds,” McKenzie explains. The naturally-occurring fatty acid (also known as soap-salt) is also more effective against vines, moss, underbrush saplings, and tree suckers than acetic acid, according to McKenzie.

Some organic weed killers contain salt (sodium chloride.) It’s a great option for killing weeds on your driveway or patio, but because it can seep into the soil, it’s best to avoid using salt on your lawn or garden bed.

Finally, according to McKenzie, a 5 to 10% essential oil component such as citrus oil (d-limonene) or clove oil is “proven to have notable herbicidal action.” Clove oil has the additional benefit of being a natural insecticide and pesticide.

While most organic herbicides only work on grown weeds, you can use corn gluten meal as a pre-emergent on lawns to prevent the germination of weed seeds. “Corn gluten meal is a classic base component, which controls weeds by inhibiting root formation,” McKenzie explains. Plus, corn gluten also contains nutritional properties that can help your lawn grow lush and green.

This vinegar-based organic weed killer gets a green thumbs up from McKenzie, who says “a pure and simple vinegar remedy with a 20% acetic acid component is just perfect for secure use in the garden.” Though this gallon version doesn’t come with a sprayer attachment, the weed killer also comes in a 32-ounce spray bottle version. Many reviewers saw results in a matter of hours.

One helpful review: “It is an amazing weed killer. I think I've tried just about everything over the last 40 years and there is nothing that compares to the effectiveness of this product. One of the toughest weeds to kill is Canadian thistle and this product destroys it.”

Combining the powers of citric acid and vinegar, this organic weed killer can help manage severe weed infestation in your yard. The formula also contains salt, clove oil, and lemon juice, which is high in citric acid. The jug comes with an optional spray nozzle for easy application, and reviewers report seeing results within 24 hours. Also cool: The pet-friendly brand donates a portion of each sale to animal shelters nationwide.

One helpful review: “We had some very heavily overgrown weeds in some flower beds and this stuff worked amazingly! Killed everything we sprayed overnight!”

Formulated with 5% ammonium nonanoate (a fatty acid soap salt), this Ortho weed killer is listed with the Organic Materials Review Institute (OMRI) for organic gardening and has a battery-operated wand with several spray options for better targeting. Batteries are included, and according to reviewers, should last as long as the bottle. The weed killer starts working in as little as 15 minutes, with best results appearing in just two and a half hours.

One helpful review: “I sprayed this on large dandelions, some vile sticky vine-like weed, and mallow (my arch nemesis) mainly. I used it on a sunny day in full sun and in the shade. The weeds in the sun predictably died first, but within a day the ones under cover also died.”

The formula of this organic weed killer combines the power of vinegar and sodium chloride to kill weeds within 24 hours. Because salt remains in the soil for a long time, this is a great weed killer to use in the cracks of your driveway, patio, and sidewalk — all the places where you don’t want plants to grow.

One helpful review: “The management company for the association where I live sent out a bunch of letters to the homeowners regarding weeds growing between the driveway pavers. There are a lot of cats and kittens that roam around so I tried to find something that wouldn't hurt them [...] It works for sure. Some weeds turned brown within 24 hours, and some took a little longer, but they all wilted and died.”

Made from oranges and a 17.5% concentration of citrus oil (or d-limonene), this organic weed killer starts destroying weeds in as little as two hours. It’s OMRI-listed for organic gardening and registered with the United States Environmental Protection Agency (EPA). Plus, it has a pleasant citrus smell.

One helpful review: “I admit, this item is a bit pricey compared to other weed sprays, but man it killed weeds much faster and much, much more efficiently than Roundup did. I am seriously considering buying this in a bigger container.”

The granules of this weed preventer are made entirely from corn gluten meal, and when dispersed, prevent the seedlings of dandelions, crabgrass, and other common weeds from developing by inhibiting their root growth. The nitrate-rich formula also feeds lawns to ensure a deep, green color. For the easiest application, you’ll need a broadcast or drop spreader that will disperse the weed preventer evenly over your lawn. Since it targets seedlings, you’ll want to use this weed preventer twice a year, in early spring and fall.

One helpful review: “We had a ton of dandelions come up in our saint Augustine grass. We don't use chemicals so we have been picking them, every time the seeds spread everywhere and more come up. We spread this and then picked all the dandelion plants out and it works great to keep dandelion seeds that landed everywhere from sprouting. We finally got it under control.”

This sprayer makes it easier to target weeds without damaging surrounding plants. To use, just fill up with your preferred weed killer, pump the top handle to pressurize, and squeeze the trigger. The sprayer has a comfort-grip handle, and the adjustable nozzle has stream and cone settings.

One helpful review: “The construction and quality of materials on this sprayer really impressed me. It "feels" much more expensive, and seals beautifully. The sprayer makes a very nice fan spray for pesticide, and a very sharp stream for knocking out weeds. I especially liked that the nozzle doesn't drip or dribble under pressure.”

More like this
The 12 Best Lemon Candles
By Lauren Moison
The 4 Best Humidifiers For Hard Water
By Scarlett James
The 8 Best Animal Repellents For Gardens
By Lauren Moison
Of The Most Popular Home Products On Amazon, These Are The Best Bargains
By Laura G.
Get Even More From Bustle — Sign Up For The Newsletter
From hair trends to relationship advice, our daily newsletter has everything you need to sound like a person who’s on TikTok, even if you aren’t.