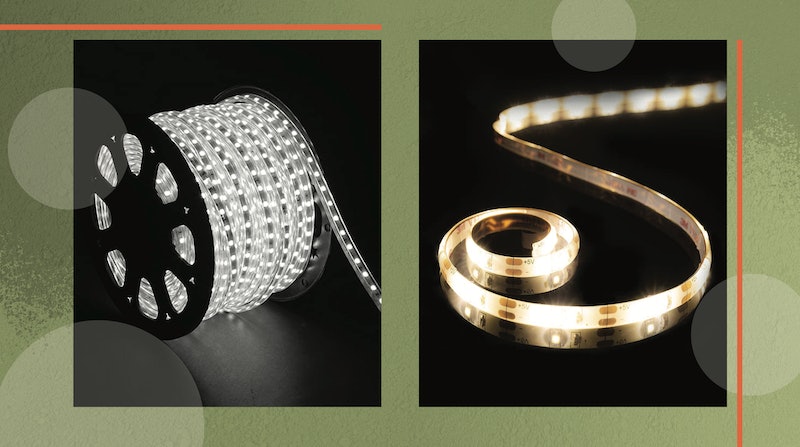 LED strip lights can be a great way to brighten up your deck, patio, or other outdoor space — but you can’t use just any set outdoors. The best outdoor LED strip lights should be water resistant (look for a minimum IP65 rating, which can handle exposure to dust and rain from any direction) and powered by a source that you have easy access to. Many strip lights have a power cord that needs to be plugged into an outlet, but if you don’t have this outside or just don’t want to bother with that, there are also quality picks that are battery-operated or solar-powered.

Once you know what kind of power source you want to use, choosing the best LED strip lights for your space boils down to aesthetics. Some strip lights display a single color — you can even find black light options — while other picks allow you to change the color of the lights based on the mood you’re trying to create. Also be sure to take note of the number of LEDs per strip; the more LEDs, the more light the strip will put out. You’ll also want to measure your space so you can choose light strips that are the correct length, though some can be cut down or connected together to form a longer strip if necessary.

Many strip lights come with extra features that may be of interest, including a timer to automatically turn the lights on and off, or a dimmer to customize the brightness. Some picks come with a remote control that allows you to adjust settings from a distance, and others can be controlled with an app or even your voice.

These six sets of LED strip lights are all suitable for outdoor lighting, and tons of Amazon reviewers have commented that they’ve totally transformed their spaces.

With more than 37,000 reviews on Amazon and a solid 4.4-star rating overall, these LED strip lights are an overwhelming favorite on the site. And because they boast an IP65 rating, they can be utilized outdoors since they’re water-resistant and can handle exposure to dust — just note that the plug and the remote aren’t waterproof, even though the strip lights are. The strip lights are easy to install using the strong adhesive backing, and should be placed near an outlet since this pick needs to be plugged in. The included remote control allows you to easily make adjustments to the settings, including dimming the lights and choosing from a wide range of color options.

The pick featured above is 32.8 feet long (though multiple strips can be connected to one another to extend the length, if needed), and it features 300 LEDs. But these are also sold in a shorter 16.4-foot option, or you can trim them according to the brand’s instructions.

Enthusiastic Amazon review: “I put these lights on my cabana bar outside. Attached them at the end of July. I leave them on 24 hours a day. The lights are clear and bright. Definitely buying more!”

If you’re seeking battery-powered LED strip lights for outdoors, this pick from Echosari is definitely your best bet — the popular lights boast a solid 4.1-star rating overall on Amazon, among 3,000 and growing reviews. They’re powered by three AA batteries, so you can place them anywhere you want without worrying about proximity to an outlet. The strip lights above feature a warm white color (the exact color temperature is 2,700 Kelvin), though they also come in cool white, blue, or multicolor versions, and can easily be installed with the adhesive backing. Use the included remote control to change up the settings, including utilizing the dimmer and timer, or turning on one of the eight different light modes. The strip lights have an IP65 rating, so they’re water resistant, and it’s okay if they get dusty.

The strip lights are 9.8 feet long, but can be trimmed if needed. Note that multiple strips can’t be connected together, though.

Enthusiastic Amazon review: “I bought two to use on my outside bar. The strip of lights sticks well and stays in place . Batteries last a very long [time.] I was skeptical about buying battery power led lights . But I’m very happy with them.”

These LED strip lights from Govee are one of the smartest options out there, since they can be controlled totally hands-free using Alexa or Google Assistant, or with the free Govee Home app. The LED lights can be set to glow in pretty much any color you’d like (Govee claims they have more than 16,000,000 color options), and can even be set to sync up with the music you’re playing. Amazon reviewers are wild for this pick, giving it a 4.5-star rating overall on the site after more than 5,000 reviews.

While Govee doesn’t provide a IP rating for these strip lights, the brand states that they’re water-resistant, and Amazon reviewers confirm that they hold up just fine outdoors. This pick is installed with adhesive, but need an outlet to operate.

These particular strip lights are 16.4 feet long with 150 LEDs, but Govee also sells a longer 32.8 foot option, too. Reviewers indicate that you can attach two strips together, if needed, or trim them.

Enthusiastic Amazon review: “Literally the best led lights I’ve ever bought, very high quality and sticks very good to any surface, unlike the ones I bought previously (stuck for one day the fell and broke, not from amazon) not to mention they’re water proof so that makes them even more durable”

With a whopping 150-foot length (and an incredible 2,700 LEDs in total!), these LED strip lights from Ainfox are perfect for outdoor spaces that require a lot of lighting — you can even connect multiple strands together for more length, according to reviewers, or trim where there are guiding marks. The strip lights need to be plugged into an outlet, and they’re installed using the included plastic clips.

The water-resistant IP65 rating means this pick is suitable for outdoor use. While these strip lights don’t have many bells and whistles (they’re simply turned on and off using the attached controller), reviewers adore them. That said, if this particular color or length isn’t your favorite, Ainfox also sells blue, warm white, green, and red options, too, as well as shorter lengths.

Enthusiastic Amazon review: “Would highly recommend this product if you need patio, lanai, boat docks or any outdoor lighting. Brightness is just beautiful. Bought 2 sets. Tried other brands. Anifox seemed to be the best. Strip lighting can be cut & added on. You’ll love them. Never had a problem with this product.”

Don’t feel like bothering with plugs or batteries? These LED strip lights from Homeleo are conveniently solar powered. They take about 6 to 8 hours of sunlight to reach a full charge, and can run for about 8 to 10 hours straight after that. With an IP65 rating, this pick is suitable for outdoor use since it’s dust and water resistant. To install, you can utilize either the adhesive on the back or the included hooks. The manufacturer does not recommend connecting multiple strips together, but you can cut them to your desired length if they’re too long.

The strip lights feature 19.6 feet of LED lights (with 180 LEDs in total) in a warm white hue. Choose from eight different light modes — including slow fade, twinkle, and steady on — as well as auto on/off that programs the lights to turn on only when it’s dark.

Enthusiastic Amazon review: “Just what I wanted! No issue with sticking to the wood deck. I was delightfully surprised it came with small hanging brackets for use if needed.”

Whether you’re throwing a party or decorating for Halloween, these LED strip lights from DeepDream feature a black light color that’ll certainly bring the fun. The LED strip lights feature 300 vivid LEDs and they boast an IP65 rating, so they’re safe to use outdoors. Easily install the lights using adhesive, and plug them into an outlet for power.

If the 16.4-foot length of this pick isn’t enough, you can connect multiple strip lights together. And if a shorter length is needed, the strip lights can easily be trimmed.

Enthusiastic Amazon review: “These give out a very decent amount of light. If they are being used in a small space (such as a shelving unit or picture frame), you will get an excellent result with a LOT of glow on whatever you are illuminating. Even in a larger space, such as outdoors, these put out a good amount of light and pick up any glow-in-the-dark or fluorescent surfaces in the immediate area.”

More like this
How To Hide Cords Under A Desk
By Jenny White
The 10 Best Brooklinen Alternatives
By Lauren Moison
The 6 Best Nontoxic Baking Sheets, According To Food Experts
By Megan Gray
The 12 Best Lemon Candles
By Lauren Moison
Get Even More From Bustle — Sign Up For The Newsletter
From hair trends to relationship advice, our daily newsletter has everything you need to sound like a person who’s on TikTok, even if you aren’t.