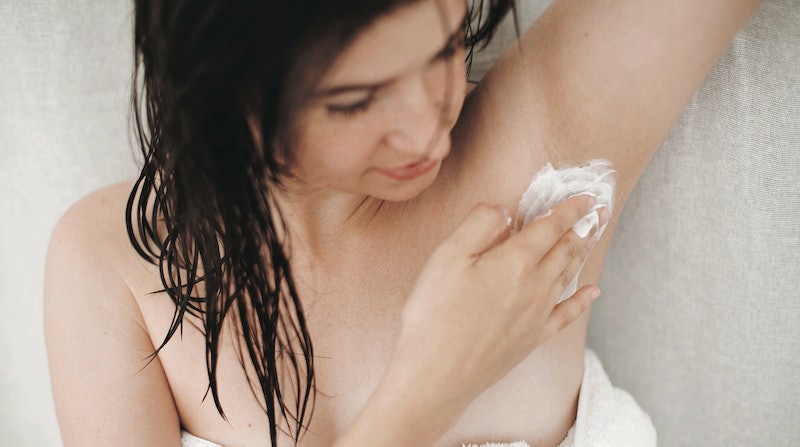 When it comes to fighting unwanted underarm odor, a good soap is key. In order to find the best soaps for underarm odors, I reached out to two dermatologists for insights. According to the experts, the best soaps for armpit odor incorporate antimicrobial ingredients to tackle odor-causing bacteria on the skin. In an interview with Bustle, New York-based dermatologist Shereene Idriss, M.D., wrote that underarm odor is typically caused by “the breakdown of sweat, sebum, keratin, and bacteria on your skin surface.” She explains further: “When the sweat is released, it is actually odorless, but the bacteria on your body starts to break it down and that's when it releases an odor.”

When it comes to “severe cases” of underarm odor, Dr. Idriss recommends using an antiseptic soap such as Hibiclens or one formulated with benzoyl peroxide. She adds that both “can be helpful to eliminate the bacteria causing malodor.” Another antiseptic ingredient you might try is benzalkonium chloride, according to New York-based dermatologist Michele Green, M.D. One thing to keep in mind: While chlorhexidine gluconate (the active ingredient in Hibiclens), benzoyl peroxide, and benzalkonium chloride can be very effective in eliminating unwanted odor, these potent ingredients can also irritate or dry out the skin so it might be worth doing a patch test on any new skin product before diving right into using it frequently.

If you would prefer to try a non-medicated soap, there are other odor-fighting ingredients which you might find more gentle but still effective. According to Dr. Green, it’s worth turning to antimicrobial ingredients like activated charcoal, peppermint, and tea tree oil. Antimicrobial substances are those that can eliminate and safeguard against microorganisms. Antimicrobials include antiseptics (which fight bacteria, viruses, and fungi) and antibacterials (which fight bacteria).

Most soaps on the market are scented, but both Dr. Idriss and Dr. Green recommend fragrance-free soaps when it comes to tackling underarm odor. Dr. Green notes that “fragrance can sometimes exacerbate odor.”

Dr. Idriss also adds that she prefers liquid wash over bar soap, as the latter “can accumulate bacteria over time” — but ultimately, whether you choose a liquid or bar soap is a matter of personal preference.

When in doubt, it’s always a good idea to consult a physician to make sure that your underarm odor isn’t indicative of a health issue and that you’re using a soap safely. But as a starting point, check out these soaps for tackling underarm odor, which are all available on Amazon.

Commonly used in medical settings, Hibiclens’s antiseptic soap has Dr. Idriss’s stamp of approval for fighting unwanted underarm odors — and this bottle of liquid soap has received thousands of positive ratings on Amazon to boot. Its primary ingredient, chlorhexidine gluconate, fights bacteria on the spot, and it continues well after you’ve rinsed it off. Dr. Idriss recommends using the Hibiclens soap “once or twice a day, morning and night” to reap its benefits in full. It’s important to note though, that fragrance is listed as one of the product’s inactive ingredients. Also, one reviewer recommended: “Don’t forget to moisturize, it can dry your skin.” While you can use it on the body, it’s best to avoid using it on your face, or near your eyes, nose, and ears. Get it in a pack of one or two bottles.

One reviewer wrote: “I have used Hibiclens for almost 20 years as a body wash, and have not used deodorant at all since then. I have no body odor and no side effects (dry skin or skin reaction), and highly recommend this product. No one believes how effective it is, but then again, they do not understand that body odor is caused by bacteria on the skin, and since Hibiclens is highly effective at killing those bacteria, the cause of body odor is gone!”

Boasting another ingredient Dr. Idriss recommends for underarm odor, this foaming wash with benzoyl peroxide doesn’t just do wonders for acne-prone skin, it can also help with underarm odor. The soap is safe for use on the face and body, and it doesn’t include fragrance in its ingredients. It’s made with 10% benzoyl peroxide to ward off bacteria — but some reviewers have mentioned the formula is too harsh on their facial skin but works well when used on the body, so it’s best to patch test first. You can snag it as a single bottle or in a pack of two. (Just note that benzoyl peroxide is known to bleach fabric, such as towels, so be sure to rinse off the soap very thoroughly.)

One reviewer wrote: “It’s worked great for me. I shower daily and wash with this last under my arms and have noticed a significant decrease in odor. You only need a little bit to go a long way with this.”

While Dr. Idriss prefers liquid soaps, this is a solid option for underarm odors if you prefer a bar soap. The bar soap can be used on both the face and body, and it’s formulated with 10% benzoyl peroxide. As a bonus, it’s inexpensive, too. The formula is free of fragrance, along with dyes and parabens. As with many medicated soaps, it can be drying — the manufacturer recommends starting with just one application per day.

One reviewer wrote: “I clean my face and underarms with this and I have no blemishes now and my underarms don’t smell. Deodorant only works for so long but it’s easy for me to smell once I start moving around or get hot. But when I use this soap I scrub my underarms really well and I don’t start to smell the bacteria until the end of the day. It really works. The only thing I would say to be careful with is the potency. This is very strong so you can’t let this sit on your skin for too long or will start to burn.”

Boasting more than 26,000 ratings on Amazon, this fan-favorite tea tree body wash packs a one-two punch thanks to tea tree and peppermint oils, both ingredients Dr. Green recommends for underarm odor. Even though it skips out on added fragrances, the liquid soap is formulated with fragrant oils, which one reviewer described as a “true peppermint scent” so keep that in mind if you’re sensitive to essential oils. The formula includes moisturizing ingredients like coconut oil, jojoba oil, and olive oil to ward off dry skin, too. According to the manufacturer, it’s safe to use on your face as well.

One reviewer wrote: “This body wash is amazing [...] I’ve suffered with underarm body odor since I was around 14 years old. My battle was constantly lost with all of the soaps, scrubs, and other remedies that were recommended. I’ve tried about every deodorant brand there is. Nothing worked for me. Usually even after I shower, there’s still a hint of odor. Today, NOTHING. This stuff smells AMAZING and leaves you feeling so freaking fresh. Not to mention it definitely moisturizes more than all of the other ones.”

5. A Bar Soap With Activated Charcoal

This bar soap is made with activated charcoal — another ingredient Dr. Green suggests trying — to help combat odor-causing bacteria. Peppermint oil is also on the list of ingredients, along with moisturizing shea butter and olive oil to leave skin on both your body and face feeling soft and smooth. The manufacturer doesn’t indicate whether the soap has added fragrances, but inclusion of peppermint, eucalyptus, and lemongrass oils punches up the bar soap with a light scent that reviewers have described as citrus-like (but just keep in mind that some people are sensitive to essential oils). Another shopper described the soap as “very rejuvenating and good for sensitive skin.”

One reviewer wrote: “I haven’t tried it on my face long enough to monitor results, but I wash my armpits with it and I elaborately do not need any deodorant. It is not drying either. I love it!”

This cruelty-free castile body soap is formulated with 0.13% benzalkonium chloride, an antimicrobial ingredient Dr. Green recommends. It also incorporates nourishing ingredients like coconut oil and sunflower oil to help prevent skin from getting dry. “Love everything about this soap!” wrote one reviewer. “No scent and very gentle on the skin.”

The soap is unscented, and there’s also no indication of added fragrance in its ingredients list. While on the expensive side, you’ll receive one gallon of the stuff, so it should last you a long time. And it’s super versatile — it’s safe to use as a body or face wash and even as a hand-washing soap, and it has a thick consistency that you can dilute if needed. Plus, the manufacturer specifies that you can add your favorite (safe) essential oils for added scent if you wish.

One reviewer wrote: “This product is kind of pricey, but well worth the extra money spent. It feels great on the skin, & leaves you clean, refreshed, & soft. I will definitely buy again.”