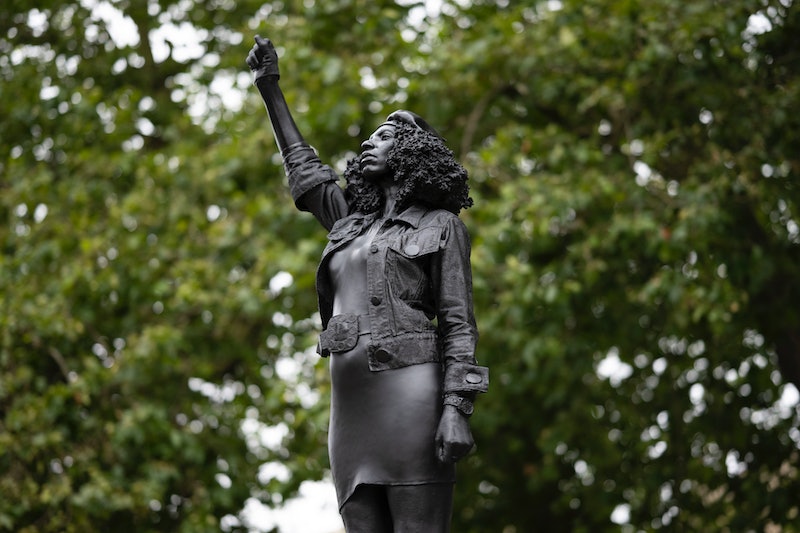 A statue of BLM protester Jen Reid has appeared overnight in Bristol, on Edward Colston's former plinth. The Guardian reports that the piece, which has not been authorised by Bristol City Council, was created and placed there by artist Marc Quinn.

Some of the most notable images, taken at the UK's nationwide BLM demonstrations, were those documenting the toppling of Colston's statue. Of all the photographs and videos which captured those moving moments, one in particular grabbed Quinn's eye and captured his imagination. It was that of protester Jen Reid, standing on top of the empty plinth with her arm raised in a Black Power salute.

Reid, speaking in a joint statement from herself and the artist says , "When I was stood there on the plinth, and raised my arm in a Black Power salute, it was totally spontaneous," she said. "I didn't even think about it. It was like an electrical charge of power was running through me."

Quinn reached out to Reid, whose husband took and shared the photo online, via social media to propose the idea and see how she would feel about her likeness being used. Reid was all for it and thus began a top secret operation.

In order to create the black resin and steel figure, entitled A Surge of Power (Jen Reid) 2020, photos were taken of Reid recreating the stance in Quinn's studio — and not with any old camera. An uber hi-tech 3D scanning machine with 201 cameras snapped extensive multi angle images which were then 3D printed in sections. These sections, per the Guardian, were then cast in resin and put together by Quinn's highly skilled team of craftsmen.

Following weeks of organisation, collaboration, and creating the statue finally found its place at the top of Bristols' Colston Street in the early hours of Wednesday July 15. Quinn told the Guardian that he'd enlisted the help of a "professional outfit" he's known for a long time, who hoisted it on top of the empty plinth with the help of a hydraulic crane truck. Reassuringly he explained that all of the relevant health and safety checks were taken when it was placed in its new home, stating that it's, "extremely difficult to move”.

Although the statue hasn't been officially permitted by the council and Quinn says it's not intended to be there permanently, he hopes it serves as a public reminder of the BLM movement. "Keeping the issue of Black people’s lives and experiences in the public eye and doing whatever I can to help is so important," he says. "Those of us who have privilege have a duty to be part of change."

"To those who are listening," Reid says to the Guardian, "keep talking, keep righting wrongs when you see them. Keep educating those that want to listen. Unlike Black History Month, I hope this statue addresses blackness every day."

More like this
Gen Z Are Twice As Likely To Identify As Queer, According To New Data
By Sam Ramsden
Pret & Costa’s Coffee Is The Strongest On The High Street, According To Which?
By Sam Ramsden
Here’s What TikTok's "Mascara” Trend Is *Really* About
By El Hunt
Twitter Has *A Lot* To Say About The "Single Penalty”
By Sam Ramsden
Get The Very Best Of Bustle/UK
Sign up for Bustle UK's twice-weekly newsletter, featuring the latest must-watch TV, moving personal stories, and expert advice on the hottest viral buys.