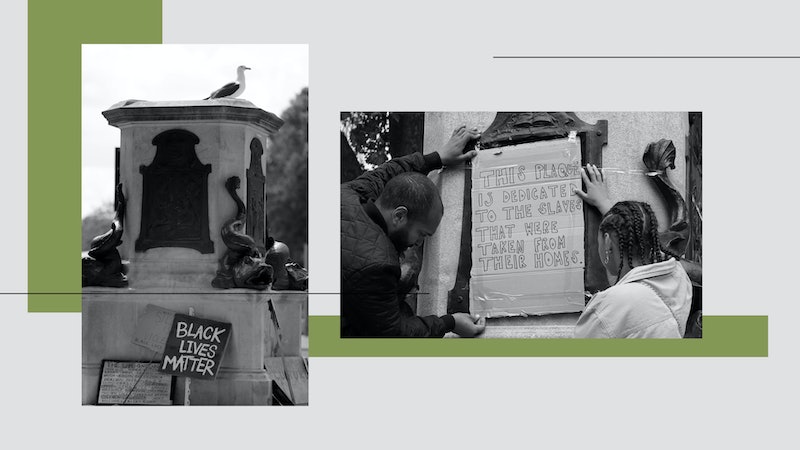 The weekend of June 6 saw anti-racism protests up and down the country as Brits stood in solidarity with U.S. marchers demanding justice for Black Americans killed unlawfully by police. These deaths, including the recent killings of George Floyd, Breonna Taylor, Ahmaud Arbery, and Tony McDade, are just four of around 1,000 people killed annually at the hands of the U.S. police force.

In addition to showing solidarity, UK Black Lives Matter marches drew attention to the discrimination and overt systemic racism that Black people and communities in Britain still face today. “The UK is not innocent”, is a phrase that's become central to protests here in Britain, serving as a succinct reminder of the atrocities committed at the hands of British people throughout history.

In Bristol on June 7, protesters toppled the statue of Edward Colston, a 17th Century slave trader and active member of the Royal African Company. As part of the Royal African Company, Colston was responsible for the trafficking of over 80,000 people from Africa to the U.S., making the RAC one of the world’s most prolific slave trading merchants. Colston’s statue, a de facto celebration of his many, many ties to the slave trade, stood in the city’s centre where thousands would pass it daily, alongside the building that bears his name. Colston Hall, just streets away and Bristol's flagship concert venue, has been the focal point of anti-racist campaigns by residents for a number of years. In 2017, the venue’s trust announced that a long overdue name change would follow a period of renovation estimated to complete in Spring 2020, now pushed back to Autumn of 2020 following coronavirus work restrictions.

The historic triumph in Bristol inspired the launch of Topple the Racists, a new website launched by Stop Trump Coalition that maps out colonist monuments around the country. Their mission statement reads: “We believe these statues and other memorials to slave owners and colonialists need to be removed so Britain can finally face the truth about its past – and how it shapes our present.”

Cities across the country are now taking Bristol's lead. On June 9, a statue of Robert Milligan was removed from outside the Museum of London Docklands, following Sadiq Khan's announcement that London's statues and street names would be reviewed. In Oxford, hundreds of protestors gathered on June 9 outside the university's Oriel College to demand the removal of Cecil Rhodes' statue. The historic market town of Bishop's Stortford, Hertfordshire, is campaigning to rename the Arts Centre and road which currently bear his name also; see the Stortford Against Rhodes manifesto. And in Plymouth, Sir John Hawkins Square – a public space named after the 16th century slave trader described as "the first English slave trader" in the Encyclopaedia Britannica – is set to be renamed.

The call to remove monuments of racist figures extends beyond the UK, too. In Belgium, a statue of King Leopold II – who profited from the enslavement of Congolese people – has been removed in Antwerp. Hamilton, New Zealand will remove the city's statue of John Hamilton, a British naval captain accused of killing indigenous Māori people in the 1860s. In the U.S., Confederate memorials across Virginia, Alabama, Mississippi, and Tennessee have been pulled down, removed, or have scheduled removal across the coming days.

On the morning of June 12, Repubblica journalist Antonello Guerrera tweeted that a London statue of WWII Prime Minister Winston Churchill, had been boarded up. Churchill, a known racist, was not the only monument to receive such protection – The Cenotaph, a WWI memorial on Whitehall, had also been placed behind boards.

Prime Minister Boris Johnson shared a series of tweets seemingly in response to criticisms of the protective measures, saying: "to tear [the statues] down would be to lie about our history, and impoverish the education of generations to come." It's important to mention that, as highlighted by Twitter user mxliviax, a 2012 review found that the UK government systematically destroyed thousands of documents pertaining to and detailing Britain's most horrendous crimes during the final years of the British Empire. To use Johnson's words, the UK government "censor[ed]" history. Johnson, who has in the past used racist terms when speaking about Black people, added that Churchill was a "hero" who "fully deserves his memorial."

In direct opposition to Johnson's stance, hundreds of thousands have signed petitions calling for change in the UK’s extensive memorialisation of individuals involved in the slave trade. Removing these statues and signs would ensure the atrocities committed by individuals and the systems they represent are remembered in the appropriate context. Rather than being celebrated without mention of their actions and involvement, they will be held accountable in history books and curriculums as key players in maintaining the structures of inequality that marginalised – and still marginalise – Black people and communities and other minority groups in Britain.

Below are just a handful of the other UK statues, locations and buildings that honour individuals with ties to the slave trade and other human rights atrocities. While this list is not exhaustive, it serves to highlight the extent to which Britain has been complicit in ensuring such figures are to this day memorialised inaccurately and without context. It will be updated regularly.

Speaking Statues, a UK organisation that works to highlight just how embedded colonial symbols are in our everyday life, regularly share more information on the subject. You can learn more about Britain’s colonial legacy and role in the slave trade, as well as finding other media on Black British History and the Black British experience, via these articles, podcasts, and history resources.