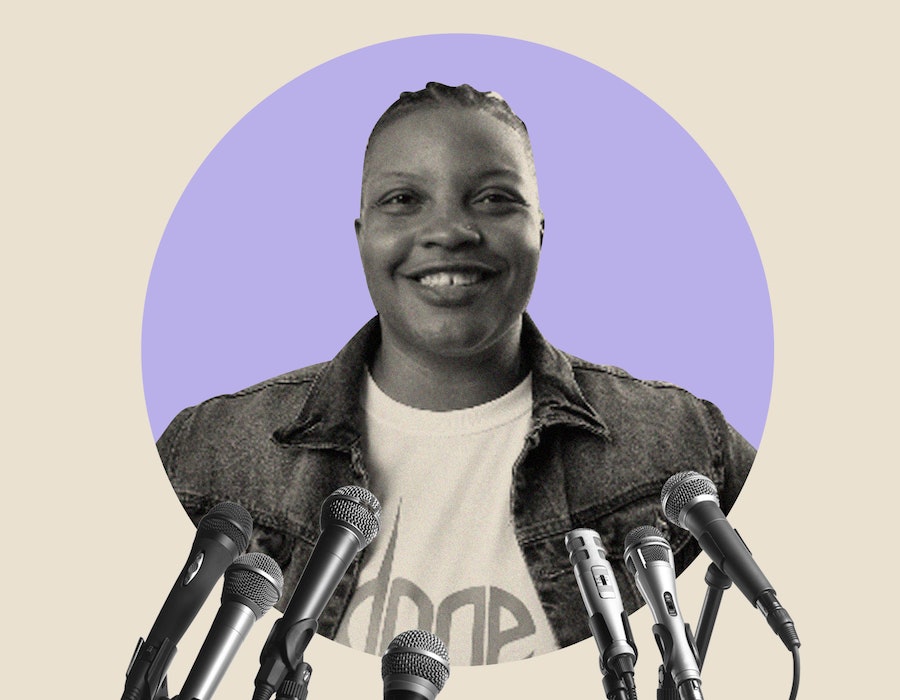 In Bustle’s Quick Question, we ask women leaders all about advice — from the best guidance they’ve ever gotten to what they’re still figuring out. Here, Hannah Ferguson tells Bustle about making history as the first Black female professional brewer in Ohio, opening a cider house and winery, and not living with any regrets.

Just four years ago, Hannah Ferguson’s curiosity about the beer brewing process quickly turned into her making history as the first Black female professional brewer in the state of Ohio. Despite the odds — only 1% of the country’s brewery owners are Black and roughly 7.5% are women, according to the Brewers Association — her role in redefining Black leadership in a new era of craft beer within a traditionally white, male-dominated field is bringing change and diversity to the beer industry.

Though Ferguson wears the title proudly as the first, she insists she won’t be the last. She encourages other Black women who are interested in pursuing a career within the craft beer industry to reach out to a local brewery to get started. “Even if there are not many women or many people that may look like you, if this is the field you want to go into, don’t let that stop you,” she tells Bustle.

On the heels of opening an urban cider house and winery — an extension of her inclusive lifestyle brand Dope (dwelling on positive energy) — Ferguson tells Bustle how she unwinds (hint: it involves beer), the bad advice she listened to, and how she overcame her fear of failure.

HF: We’re starting construction for my business, Dope Cider House and Winery, which will open in my hometown in Youngstown, Ohio. It’ll be located within a local brewery called Penguin City Brewing Company. We’re hoping to start with the renovations soon. I’m creating a crowdfunding campaign to raise more cash flow to finish some of the final projects, and I’m also working on recipes for different ciders.

You have a lot on your plate. How do you turn your brain off?

HF: It’s hard to turn off my brain. Sometimes it’s even hard for me to fall asleep. I’ll drink a high-ABV beer, talk things out with friends or family, or take my dog for a walk. Or I’ll just sit and play with her.

What was your biggest fear stepping into the cider and wine business, knowing there weren’t many people who looked like you in this field?

HF: I was terrified to fail — but you don’t know if you're going to fail if you don’t actually try. It almost feels like added pressure being labeled as the first Black woman in my state to become a professional brewer, launch a brewery business, and succeed at it. On the other hand, it’s a challenge I’m willing to take, and I know it’ll motivate me to work harder. A lot of people have a fear of failure, but you have to push that aside. I don’t want to live with any regrets, and I don’t want to count myself out before I even start.

I’m not just here to be a face; I actually know what I’m doing.

What’s the biggest challenge you faced early on in your career as a brewmaster?

HF: When people find out you're a woman, you’re a brewer, and you’re Black, you get that element of surprise and catch people off guard. I want people to know that I bring something to the table. I’m not just here to be a face; I actually know what I’m doing. I can do exactly what a white man can do.

One day I hope when someone sees me, hears about me, or even when the next woman says they’re a brewer, people aren’t surprised anymore. I try to work hard and prove that I belong in this industry.

Have you ever received bad career advice? What was it?

HF: My bachelor’s degree is in sports management. I always said I was going to be a sports agent. That was my first dream. Then someone told me, “Women won’t make it in this field.” Hearing those words really discouraged me. I let that defeat me from pursuing different avenues after undergrad. If I had the drive back then that I have now, it could have been different, and I could have been making a different type of history.

What surprised you the most in your journey as a brewmaster?

HF: What surprised me the most is when you look at the industry and all the craft breweries in the U.S., the fact that there are still so few Black people in the industry. And that’s not just limited to brewing beer, but even owning breweries or farming for the grains to get the ingredients to make it. We aren’t in any of that.

If you look at our history, we’ve come from fields, we’ve done gardening, we’ve done this work, but yet we’re still losing out in a multimillion-dollar industry. Also, the fact we still have firsts. It truly surprised me that I’m the first — and only — Black female brewer in the state of Ohio.

But that’s such a huge accomplishment. How do you feel about that?

HF: I don’t think I’ve truly processed the exact emotion. Sometimes it’s overwhelming, and sometimes, it makes me nervous, but then it makes me excited, it makes me proud. It’s all these emotions jumbled into one. But I’m taking all the good and running with that and pushing the bad thoughts aside. I take it day by day. I would never have thought four years ago this is where I would be today.

More like this
How Long Does Leftover Stuffing Last? Here's When To Toss It
By Chelsey Grasso and Alexis Morillo
Heinz Just Relaunched A Bean-Tastic '90s Fave
By Sam Ramsden
16 Friendsgiving Recipes Your Besties Will Love
By Alexis Morillo
How To Score A Free Reusable Holiday Cup At Starbucks
By Alexis Morillo
Get Even More From Bustle — Sign Up For The Newsletter